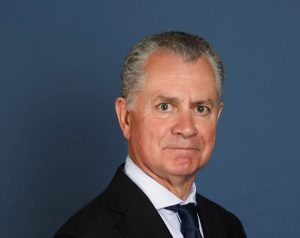 London, 30 April 2019: V.Group, a leading global provider of ship management and marine support services, today announces the appointment of Graham Westgarth as Chief Executive Officer. Graham has served on V.Group’s board since September 2018 and will take over from Ian El-Mokadem who has informed the Board of his desire to leave the company.

Graham has a distinguished track-record in the maritime sector, having worked in the industry for almost 50 years. During his career, he has operated across almost all sectors and functions in the industry, with a particular focus on ship management and helping companies achieve operational excellence. Graham has held a range of senior executive roles with companies including GasLog Limited, Teekay Corporation and Maersk UK. He has also occupied a number of industry positions, most notably as Chairman of INTERTANKO, a position he held for five years.

Commenting on the announcement, John Pattullo, Chairman of V.Group, said: “I would like to thank Ian for his significant contribution to V.Group. Ian oversaw a substantial investment programme which delivered new state-of-the-art systems in critical areas such as vessel management, as well as the management and mobilisation of seafarers. He has also been instrumental in establishing a Group-wide set of values for our colleagues with safety at the core, which leaves a lasting legacy for our organisation.

“Having gone through a period of significant investment, V.Group’s primary focus is now firmly centred on delivering sustained benefits to its customers. We are delighted to welcome a leader with Graham’s unparalleled experience in marine operations.”

Reflecting on his departure, Ian El-Mokadem said: “Leading V Group has been a great privilege. It’s a fantastic business, with a great team and hugely valued clients. I wish Graham and my colleagues every success in the future and hope to remain a close friend of the company in which I will retain an interest.”

Graham Westgarth commented: “I’m deeply honoured to be given the opportunity to lead V. Group, a company that I have long admired and for which I have had the privilege of serving as a Board member for the last six months. My time with the company has shown me that V.Group is well-placed to capture the opportunity that exists within the sector, with its unparalleled understanding of the challenges our customers face. I very much look forward to working with the V.Group team to build on the successes they have registered to date.”