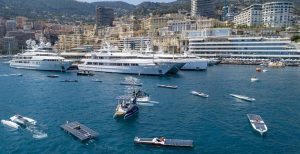 Principality of Monaco (April 30, 2019) – The Yacht Club de Monaco has thrown down the gauntlet for the sixth annual Monaco Solar & Energy Boat Challenge, banning all fossil fuels and asking competitors and the Monegasque community to strive for zero emissions during the 5-day event. Torqeedo has partnered with Yacht Club de Monaco to ensure that all boats involved in the organisation of the event are 100% electric and will serve as the event’s Technical Sponsor.

The Monaco Solar & Energy Boat Challenge aims to inspire technical innovation by matching the creativity of young engineers with experienced manufacturers to design, develop and race emission-free boats. The excitement of racing is balanced with key players tackling issues such as how the yachting community can effect change on environmental challenges in the marine environment, sustainability and energy efficiency during a concurrent series of lectures and open forums.

Co-founder of Solar Impulse and Solar Class sponsor Bertrand Piccard said, “We need to demonstrate where the latest technology is leading us: it’s taking us a long way – in the right direction.”

“The Yacht Club de Monaco is, once again, demonstrating that it is a nerve centre of the green yachting movement,” said Dr. Christoph Ballin, co-founder and CEO of Torqeedo. “We’re proud to support the continued efforts of the Yacht Club de Monaco and its members to reduce greenhouse gas emissions and encourage the development of sustainable boating technology.”

Teams from around world will gather at the Yacht Club de Monaco to participate in the Challenge from July 2 through July 6, 2019. The event is hosted in partnership with the Prince Albert II of Monaco Foundation and the International Powerboating Federation.