The BDI (Baltic Dry Index) fell 49 points – same more or less fall with last Friday’s the 3rd of May when it fall 47 points, and now stands at 936… The geopolitical uncertainty and imminent threats all over Planet Ocean MUST be watched and followed by all before it is too late! The Seatrade Awards spectacular at London’s Guildhall indeed changed the mood. John Faraclas’ daily recap:

The Capes’ BCI fall was increased to yet another triple-digit; 171 points were lost and now same stands at 1,119 points… CAUTION!

The Panamaxes’ BPI is more or less steady “playing” up and down from minus one to two points; today one point was lost and the BPI reads 1,189 points…

Hooray hooray for the Supras’ BSI which gained nine points following minor but steady losses and now stands at 761 points!

The Wets still with mixed feelings; the last published BDTI (Dirties) and BCTI (Cleans) stood at 645 – plus seven and 536 – minus ten respectively…

The Geopolitical uncertainty is causing tsunamis all over; the Pompeo cancellation of his trip to Berlin to meet Frau Merkel and the unscheduled visit to Iraq tells it all. The deployment of aircraft carrier, USS Abraham Lincoln to the region. As well as the news that the US sends B-52’s in the region is evident that the USA will not tolerate Iranian threats; on the contrary. Hope Russia’s Lavrov gets the message and I am sure their meeting in Finland yesterday was a crucial one but also enhancing… I guess Iranian leaders got the message too…

Still the MIGRANTS on top but still in our view thee isn’t a coherent policy to ease down this despicable and inhumane mess… Moe and more poor in to Europe from the entire Med’s loopholes including the provocative and blackmailing behaviour and actions by the Turks and its president… CAUTION.

We maintain the view that the faulty line from Gib to Afghanistan and from the  Caucuses to the Horn of Africa including the  three points – North Africa with Libya in a mess, The Balkans living in uncertainty having two main different scenarios there and the East Med / Middle East in total disarray will produce unwanted situations.

Turkey’s actions in wishing to drill in Cyprus’ EEZ and the escalation of Turkey’s threats  on many other issues will definitely produce havoc and chaos! Living with president Erdogan’s authoritarian values and denying municipal election results – such as those in Constantinople (Istanbul), might brings even internal mess and lead to even a civil war. His Kurdish nightmare will also begin…  With his economy in a total mess and further USA steps against him might act childish and even attack many of his neighbours! Ultra CAUTION should be observed…

Greece lives the hype of better days by the current regime and the European as well as the Municipal elections will be a major exercise and test for the forthcoming elections. Offering too much to the people to gain votes will become a boomerang… As Europe is in a mess with too many issues – above all the financial mess and influence of Global Recession  which few admit, expect the lot to happen. CAUTION also with the Turkish provocations in the Aegean and East Med…

BREXIT not only make waves, it might bring tsunamis that the sea defences will be unable to counter… The establishment must accept reality. Those who preserve the “if in doubt don’t” maxim, MUST act accordingly… The err is human, equally the peoples vote as well as the fact that everything rests with the public. It is the public that will pay the damage of any wrong doing! Whoever got it wrong with the fist referendum MUST seat in the dock and he/she has a case to answer!  Will finally the UK take part in the forthcoming European Elections? Everything is still at stake!!!

…AND a new Royal Baby Boy was born in the early hours of yesterday by the Duchess of Sussex with Prince Harry being more than thrilled! We eagerly await the name! Many Congratulations!

At the other side of the Atlantic now; in the USA the Democrats at the House of Representatives decided to go ahead and launch contempt proceedings against William Barr, the Attorney General… Itchy issues and let’s see the outcome there as at the end of the day you need two in a tango… CAUTION…

In South America, the Venezuela mess continues. Be braced for an extreme and despicable outcome to the expense of the Venezuelan people. Those supporting Maduro from the inside have any right to do so, but those from the outside, I mean nations supporting Maduro will one day seat in the Dock of Life and get the worse punishment. Things are more than obvious: Maduro MUST leave here and now! The entire Central, and North South America will get involved and Cubans, Russians and Turks must stay away…

Elections in Panama will hopefully lead to a new era and let’s hope for the better in this very important country not just in the Americas, but for the entire Planet Ocean!! Can Laurentino ‘Nito’ Cortizo who won in a very close race the 33 centum of the vote do the trick? He has to combat inequality, corruption and diversity! Watch this space!

The Ramadan begun yesterday for the Muslim World and let’s hope all Muslims find time to think for the wold peace too; it’s a must! 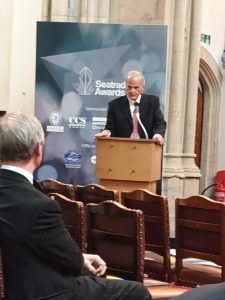 From the Seatrade Parliamentary debate with John Platsidakis at the podium

On another tone and note earlier on tonight, the 31st Seatrade Awards at London Guildhall was the Talk all over Planet Ocean.

The motion of the Parliamentary debate was: “This House believes that the early adoption of smart technology and automation will be an unqualified benefit for the maritime industry at sea and on land.” The debate brought together six leaders from the entire shipping industry to debate for the motion, three for and three against. There was also a debate involving members from the audience… For the motion: Julian Clark, John Platsidkis and Roland Spithout; against the motion: Capt John Lloyd, Michael Parker and Paddy Rogers. The debate chairman was Harry Theochari. 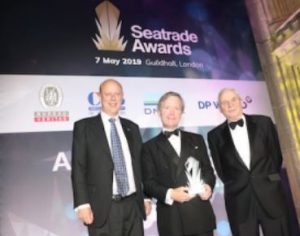 We will revert with a full account soon. On behalf of all at allaboutshipping.co.uk we warmly congratulate the organisers, all winners – persons and products/services, as well as all the sponsors and supporters of this super event, many of which are staunch supporters of this site.

Bravo to all and Bravo to Chris Hayman, chairman of Seatrade and to the very eloquent Bob Jaques – the editor of Seatrade,  who hosted the event in the presence of the Rt Hon Chris Grayiling MP, Secretary of State for Transport and prof. Dame Jane Francis, the director of the British Antarctic Survey who was the official guest of honour. 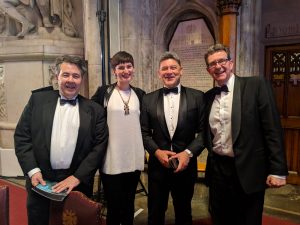