The BDI (Baltic Dry Index) “managed” to capitulate on its volatile nature and succeed in going over and above the 1,000 points mark; at 1,013 looks better… plus 39 isn’t bad at all. The weekly gains were 28 points – from 985 since last Friday the 3rd of May. Geopolitics continue to get messy… John Faraclas’ daily and weekly recap:

The Capes’ BCI was once again dominating the dry market with rich pickings; 101 points plus since yesterday surpassing also the 1,300 points threshold and now standing at 1,371!  On a weekly basis the gains stood at 81 points.

All in all the Market is still down. Per our repeated mentioning same is 1,234 points (what a number eh) below that as of the end of December 2013 when the BDI stood at 2,247 points…

The Wets with mixed feelings both on a daily as well as on a weekly basis; the last published BDTI (Dirties) and BCTI (Cleans) stood at 680 – plus right and 521 – minus two points respectively. On a weekly basis the  Dirties were up 42 points – from 638 and the Cleans were down 22 – from 546 since the 3rd of May…

The WTI stood at US$ 61.66 which is .018 cents down since last week’s closing… A very enigmatic situation; a situation to be closely monitored!

The Geopolitical situation remains more than perplexed and it remains to be seen when three regions will be set on fire following sudden but expected hostilities. Ultra-diplomatic skills should be in place to avoid the inevitable…

MIGRANTS: What a disaster that was off Tunisia when their boat capsized; 65 were drowned. Since the beginning of the year about 16r people lost their lives trying to cross over to Europe from Libya!!! 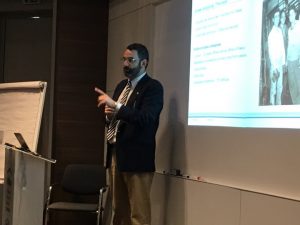 On another tone and note the second day at ALBA’s conference auditorium the IMSF 2019 was another success; the last session today on Disruption had also very interesting papers/presentations from eminent speakers. Technical and Class speakers dominated the day.

Will revert with the write up soon.

The third day down at Evgenidion Foundation in Paleon  Faliron of the 1st International DMPCO 2019 was yet another success on all counts. What …counts most was the many but very interesting papers delivered as well as some debated issues. A conference so far exceeding expectations and once again we have to congratulate  Ms Vicky Tsoukala, Associate Professor at the NTUA being the conference chair and a very good moderator in the panels she run together with young Ms Eleni  Belekou! A good update on many issues of strategic as well as of ecological significance not only for Greece but also for Europe and the Med in particular.  We managed to make it for two hours and tried to contribute as much as we could due to time constrains. 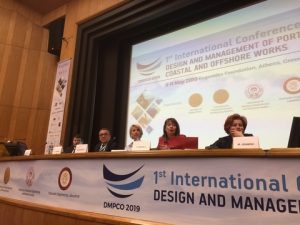 I guess the Special Session V on the “Growth of coastal and maritime tourism through prestigious international sailing regattas” was very timely and appropriate. At the time of our attendance the panel consisted of Prof. Tsoukala – moderator, Sotiris Bouseas Ceo at the Greek Challenge, the ever present in such events Maria Lekakou, Proctor at the University of Aegean, George D. Pateras, the president of the Hellenic Chamber of Shipping and Katerina Monogiou, politician, member of the shipping sector of Greece’s new Democracy party. Very interesting views were aired as well as questions and statements.  Reality bites! 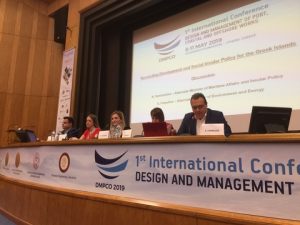 After the lunch break – were intense networking was taking place amongst the speakers, delegates and mainly students at the NTUA, there was a panel consisted of two alternate ministers, that of Shipping & Islands Policy and that of  the Environment and Energy, Nektarios Santorinios – an islander from Rhodes and the very eloquent Socrates Famellos – from the Island of Folegandros respectively; Eleni Belekou and Vanessa Chalastani also contributing and participating in the panel. One point to mention is that responses to questions if not fully understood, must be prudently asked to be explained so as to avoid any misunderstanding whatsoever from whichever side they emanate; we adhere to this!

Due to prolonged arrangements we will not be at the finale tomorrow Saturday the 11th of May of this unique conference and we take the opportunity to CONGRATULATE  Prof. Vicky Tsoukala and all at the NTUA as well as the KEFI team running the event. We hope that in two years time the event to be better for protecting the environment and furthering / improving Greece’s image in this sector.

We remind you that these ten days from the 3rd of May until Sunday the 12 of May are Days Devoted to the Sea –  a very well organised event on Culture, Sports, Shipping, Entertainment and Education organised by the Municipality of Piraeus; log on www.destinationpiraeus.com or at www.imeresthalassas.gr and see what’s on.

Have a nice evening as well as weekend and remain on guard for actions emanating from Pirates, Terrorists, Criminals and Business Hooligans whatsoever wherever you are on Planet Ocean.

Artist of the month on ArtCan: Kira Phoenix K’inan