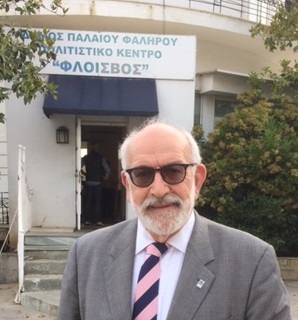 The BDI (Baltic Dry Index) lost 11 points thanks – obviously, to the Capes’ ups and downs. Geopolitics still in a mess and the Hellenic Platform of women Scientists make their presence felt! John Faraclas’ daily recap:

The Capes lost 45 points with the BCI down to 1,417; was it an expected fall? Is there steam for the Capes; wonder!

No steam for the Handies which – at least, remains steady… The BHSI at 381 though raises questions!

Stranded Wets, or intentional “pricing”? The last published BDTI (Dirties) and BCTI (Cleans) stood at 704 – plus one and 505 – minus five points respectively…

The WTI was up at US$ 62.02 following the drone attack against Saudi’s Aramco by a Yemeni pro-Iranian armed movement. CAUTION!

The Geopolitics remain perplexed with too many issues to be tackled world-wide.

The Migrants still on top of all issues.

The European Union Elections will be the corner stone for a possible big change and a chance to see something different for the better for the people of Europe as until now nothing positive takes place particularly with the debts and its despicable effects to all European nations people!

The BREXIT issue might become a nightmare for all and let’s see how internally the UK settles as well as externally with Europe.  For us here: It’s as we say in Shipping a both to blame collision but in my view the wrong side is Brussels attitude! There should have been from the right beginning Rules of Getting out and or being Expelled! All the rest is nonsense!

Turkey as you might have read elsewhere in this platform might go under; a bankrupt state which at the same time provokes every single of its neighbours. E N O U G H and Europe as well as NATO MUST end this Turkish attitude…

Greece next door lives in a limbo and still the financial crisis in NOT over. Populism can backfire. Let’s see what happens with the European and Municipal elections.

What’s up with Italy and its financial status…? France? Germany?

At the other side of the Atlantic president Trump is faced with too many internal and external issues. Iran plays with fire and the USA won’t tolerate the situ at all; not even an iota will be allowed against Iran.

In Mexico pollution levels in the capital Mexico City have reached beyond alarming levels.

A bit south in Venezuela things continue to be sour. 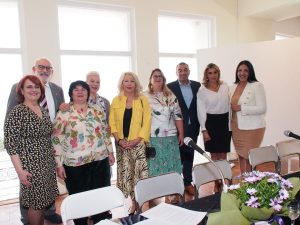 On another tone and note an excellent debate took place in Paleon Faliron’s Iconic Municipal Cultural Centre “Tower” in southern Athens. Organised by the Hellenic Platform of Women Scientists and the Municipality of Paleon Faliron – particularly following the initiation of Councillor Dr. Nicholas Chrysoveridis who also  introduced this symposium! Maria Michalopoulou responsible Councillor for Tourism and Maritime Tourism of Paleon Faliron spoke too announcing also the launching of a respective book; we eagerly await same. 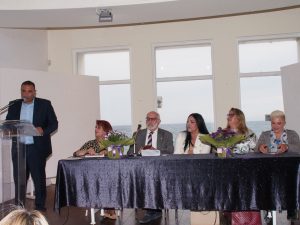 The panel with Dr. Chrysoveridis at the podium; picture credits George Christakis

The platform of the Hellenic Women Scientists, a national association founded in 1924, SEE – as same is known by its Greek initials, aims at contributing to the abolition of all unfavourable forms of discrimination against women, at creating and ensuring the proper conditions for the promotion of university women and at developing the sense of social responsibility among university women, so they represent role models and mentor other women.

Its president Dr. Evi Batra spoke too – looking and sounding content on the subject and its importance in this specialist field and then Vassiliki Kalemi a Mechanical Engineer, moderated the discussion / put forward the questions. These collectively produced questionnaire triggered much discussion from all in the panel and raised questions from an audience comprised with WISTAs representatives too as well as from women and few men from various sectors of business and we will revert with the write up as soon as same becomes available. 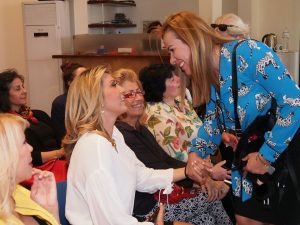 Anna Karamanli MP from Nea Dimokratia party and candidate again of the Southern Suburbs /Constituencies of Athens B’ Sector was there too as did candidate Regina Faraclas who stands as a Councillor for Paleon Faliron – she staged earlier on a gathering promoting her candidacy with the head of the party Yiannis Fostiropoulos at the Hara Coffee Patisserie.

After the debate a drinks and dips reception followed and it was good on this occasion to have Cellier’s wines – Cellier being also a sponsor of the event together with SeaWorks, STAMKON, Kalliopi Efstathiou and Trinity Events.

Wishing you all have a nice evening and remain on guard from actions emanating from Pirates, Terrorists, Criminals and Business Hooligans whatsoever wherever you are on Planet Ocean.