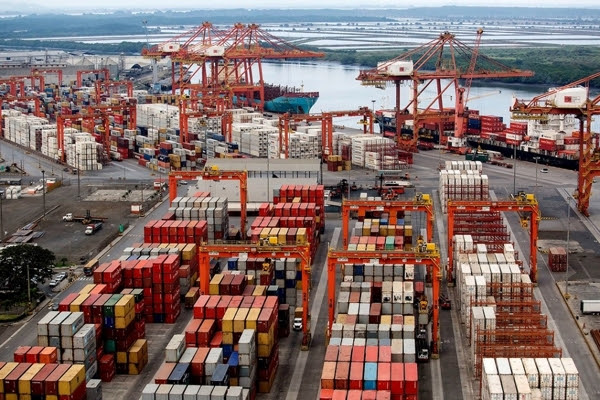 This publication builds on previous individual studies on both the East Coast of South America and the Andean Coast of the same continent. For the first time, these have now been combined into one highly interested joint report. A combination of the Machu Picchu and Cusco in the west and the majestic Amazon and the tango Mendoza in the east.

South America Container Trades is a voyage, from south to north to south, between the seaboard countries of Chile, Peru, Ecuador, Colombia, Brazil, Uruguay, Paraguay and Argentina. The report leads you along the all 38 ports on both sides served by 341 ships carrying containers, operated by 23 carriers. They connect South America with 77 ports in the Far East, Europe, North and Central America, and Africa. Among the ships are 51 ULCS, yes in South America too, ranging between 10,000 and 13,000 TEU.

America Meridionalis is notorious for the boom and bust of some of its economies, Brazil and Argentina in particular. They are also the largest: 55% and 17% of South America’s overall economy respectively. This is why, when they struggled, South America as a whole has had to contend with economic contractions over the 2014-2016 period. Happily, there has been a recovery in 2017. Although the IMF thinks that this has lost momentum, it still forecasts Latin America to grow by 1.2%. For a big Continent, that translates into a lot of cargo…

A selection of this study’s contents:

Dynamar’s new “SOUTH AMERICA CONTAINER TRADES” publication provides a wealth of relevant information which just cannot be missed by anyone involved, either directly or indirectly, in the movement of cargo by sea to or from the Southern Hemisphere.