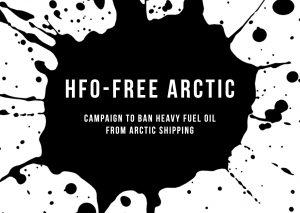 The Clean Arctic Alliance calls on the global shipping industry to immediately reduce ship speed to cut CO2 emissions globally, reduce black carbon emissions by switching to cleaner fuels in the Arctic and for International Maritime Organization (IMO) Member States to immediately enact a ban on the use and carriage of heavy fuel oil (HFO) in Arctic waters.

June 19th, 2018:- Responding to recent reports of the latest emerging climate emergencies impacting the Arctic region, Dr Sian Prior, Lead Advisor to the Clean Arctic Alliance, called on the global shipping industry to immediately reduce ship speed to cut CO2 emissions globally, and reduce black carbon emissions by switching to cleaner fuels in the Arctic [1,2]. She also called on the International Maritime Organization (IMO) Member States to immediately enact a ban on the use and carriage of heavy fuel oil (HFO) in Arctic waters [3].

“With the climate crisis pushing Arctic change into overdrive, the global shipping industry must take responsibility for its contribution and action to counter the impacts of shipping pollution. By immediately cutting ship speeds to lower CO2 emissions, and reducing black carbon emissions by switching to cleaner fuels, the shipping industry can lead by example in rapidly and efficiently lowering its contribution to this Arctic climate emergency” said Prior.

The Clean Arctic Alliance has written to IMO Secretary General Kitack Lim, asking that he send a strong message to IMO member states, asking them to support  immediate measures to reduce shipping’s contribution to the current climate crisis.

“While an Arctic ban on the use and carriage of heavy fuel oil – a source of black carbon emissions – is currently being developed by the IMO, we are calling on Secretary General Kitack Lim to raise the alarm over the current Arctic meltdown with Member States, urge them to  immediately stop the use of polluting heavy fuel oils by ships in the Arctic, and move to the use of alternative, cleaner fuels, in line with a recommendation of the IMO’s Polar Code, which took effect in January 2017 [4]. We have limited time to act and that time must be well spent, if we are to radically decrease the impact of shipping pollution on the Arctic region.”

“In addition, we must not allow shipping to accelerate the process of Arctic sea ice break-up and melt by creating leads – channels or routes – by breaking through the remaining multi-year ice, which provides an important security blanket to help stabilise the global climate – it is imperative that we protect what ice remains”, she added.

The climate crisis is driving rapid changes in the Arctic regions. In recent days the following stories have emerged:

Meanwhile, James Anderson, a Harvard University professor of atmospheric chemistry told Forbes that “World War II-style transformation of industry” has to be achieved within the next five years in order to halt carbon pollution.

Black carbon (BC), a harmful air pollutant, is the product of incomplete combustion of organic fuels, and contributes from 7-21% of shipping’s climate warming impact. The largest sources of BC are fossil fuel, biomass and biofuel combustion. Ships emit more BC per unit of fuel consumed than other combustion sources due to the quality of the fuel used. BC has human health impacts and is a potent climate forcer. When emitted in the Arctic, black carbon particles fall on snow, on glacier ice and sea ice, reducing their reflectivity (albedo) and increasing the absorption of heat. As multi-season sea ice recedes due to climate change, Arctic waters will open up to increased shipping – which could lead to increased black carbon emissions, contributing to an already accelerating feedback loop.

Recognising the threat to the Arctic from black carbon the Arctic Council’s Framework for Action on Enhanced Black Carbon and Methane Emissions Reductions (agreed in Iqaluit in 2015), commits the Arctic countries to demonstrate leadership by reducing Black Carbon (and methane) emissions produced beyond the borders of Arctic States. The Framework for Action includes a commitment to actively work with and within relevant forums and agreements, which includes the IMO’s Marine Environment Protection Committee, to promote actions and decisions that lead to enhanced black carbon and methane emissions reductions.

Heavy fuel oil is a greater source of harmful emissions of air pollutants, such as sulphur oxide, and particulate matter, including black carbon, than alternative fuels such as distillate fuel and liquefied natural gas (LNG). When emitted and deposited on Arctic snow or ice, the climate warming effect of black carbon is up to five times more than when emitted at lower latitudes, such as in the tropics.

Infographic: How Can We Reduce Black Carbon Emissions From International Shipping?

“Residual fuels such as HFO accounted for an estimated 83% of BC from ships, while ships powered with 2-stroke slow speed diesel main engines were responsible for two-thirds of global BC emissions. Further, just six flag states—Panama, China, Liberia, Marshall Islands, Singapore, and Malta—accounted for more than half of BC emissions.”

Report: Black Carbon Emissions and fuel use in global Shipping

Report: The impacts of an Arctic shipping HFO ban on emissions of Black Carbon

Heavy fuel oil is a dirty and polluting fossil fuel that powers ships throughout our seas and oceans – accounting for 80% of marine fuel used worldwide. Around 75% of marine fuel currently carried in the Arctic is HFO; over half by vessels flagged to non-Arctic states – countries that have little if any connection to the Arctic.

The Arctic is under pressure – climate change is fuelling temperature rises double the rate of further south. As sea ice melts and opens up Arctic waters further, even larger non-Arctic state-flagged vessels running on HFO are likely to divert to Arctic waters in search of shorter journey times. This, combined with an increase in Arctic state-flagged vessels targeting previously non-accessible resources, will greatly increase the risks of HFO spills.

Already banned in Antarctic waters, if HFO is spilled in cold polar waters, it breaks down slowly, proving almost impossible to clean up. A HFO spill would have long-term devastating effects on Arctic indigenous communities, livelihoods and the marine ecosystems they depend upon. (See infographic: Responding to Arctic Shipping Oil Spills: Risks and Challenges).

At MEPC 72 in April 2018, a strongly-worded proposal to ban HFO as shipping fuel from Arctic waters was co-sponsored by Finland, Germany, Iceland, Netherlands, New Zealand, Norway, Sweden and the US. The proposal for a ban, along with a proposal to assess the impact of such a ban on Arctic communities from Canada, was supported by Australia, Belgium, Czech Republic, Denmark, Estonia, France, Ireland, Japan, the League of Arab States, Poland, Portugal, Spain, Switzerland, and the UK.

At MEPC 73 in October 2018, support came from Austria, Bangladesh, Canada, Denmark, France, Germany, Iceland, Ireland, Netherlands, New Zealand, Norway, Spain, Poland and the UK, for the proposal for a ban to be sent to a Pollution Prevention and Response subcommittee (PPR 6, February 18-22, 2018), for development, along with a draft impact assessment methodology for assessing the impact of a HFO ban on Arctic ecosystems, Indigenous local communities and economies to be finalised. Work commenced on defining what types of fuel will be banned and how they will be banned.

[4] Polar Code: Protection of the Antarctic from heavy grade oils