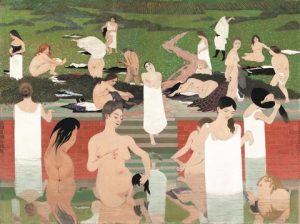 Bathing on a Summer Evening.

At the age of just 16, Félix Vallotton left his comfortable home in the lakeside city of Lausanne, Switzerland, to study art in Paris.  Although he had parental approval, it was a brave step. He had not had much formal training, but he had a natural talent which throughout his life he would apply in highly original ways. 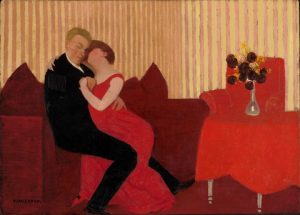 In the 1880s the predominant style was Impressionism, but the young man set himself aside from that and other trends and would continue to do so. He just pursued his own highly individual path, says Ann Dumas, lead curator of the exhibition Félix Vallotton: Painter of Disquiet.

The Royal Academy in London lucidly recounts in this new show, which runs until September 29 2019, how Vallotton emerged as a printmaker of genius, a skill he deployed to chronicle the life and lusts of the Parisian bourgeoisie and the injustice of the notorious Dreyfus affair. 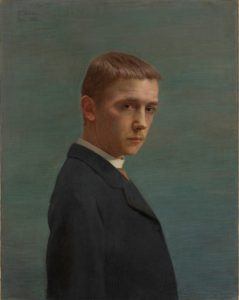 Self-portrait at the Age of Twenty

Félix Vallotton (1865–1925) was a master of the technique which he knew as xylographie – engraving on wood, from the Greek xylo meaning wood, and -graphy meaning writing or recording.  His scenes of the five o’clock seduction – clandestine, brief after-office hours trysts – illustrated both in woodcuts and in oil paintings the realpolitik rather than the romance.

The wonder of his woodcutting is a striking feature in the Royal Academy rooms devoted to him, where the clearly structured exhibition shows the broader canvas of his life and works. He went through fundamental changes of style, while maintaining resolute clarity of line.

The first exhibition in the UK since 1976 of his oeuvre, it is an exciting insight into aspects of fin-de-siècle Paris beyond the usual suspects, although his compatriots in Switzerland and France have had much more opportunity to admire the man whom the Royal Academy calls a “painter of disquiet.” This description is mainly appropriate for scenes he painted from his family life and of the public and private turmoil of the French capital. Vallotton captured the tensions of an age redolent with hypocrisy. He was scrutinising society with a highly perceptive and sometimes satirical eye, until in the Great War a militantly French patriotism gripped him.

By means of examples, in total 100 works, from every period of the artist’s career borrowed from public and private collections in Europe and the US, a remarkable journey is traced.

In Paris, Vallotton enrolled at the independent and liberal Académie Julian, spurning the offer of a place in the eminent École des Beaux-Arts. He spent hours in the Louvre, studying Leonardo da Vinci, Holbein, Dürer, Goya, Manet, and especially his idol Ingres. Just as significantly, at the Académie Julian, Vallotton became friends with the printmaker Charles Maurin, who introduced him to the art of the woodcut.

Parisians were fascinated by an exhibition of Japanese ukiyo-e prints with their wide subject range at the École des Beaux-Arts in 1890, and Vallotton, who was like many artists of his era an enthusiast of Japonism ((a movement of Japanese aesthetics) collected these prints. Among them was a colour woodcut dating from around 1800 entitled Courtesans, one of eight views of beauties of Shimada. The woodcut, by Kitagawa Utamaro is now in the collection of Fondation Félix Vallotton at Lausanne.

Vallotton moved to the Montparnasse area where he got to know Henri de Toulouse-Lautrec and began a notebook in which he recorded his eventual 1,700 works.

Despite his immersion in the bohemian milieu, he stood aside from the artistic ferment around him, spurning contemporary movements such as Impressionism and its successors, in favour of a more clinical approach as seen in Self-portrait at the Age of Twenty (Musée Cantonal des Beaux-Arts, Lausanne) and the fine detail of the painting The Sick Girl from 1892 (Kunsthaus, Zürich).

Then came a swerve to a wholly different style, in part influenced by his acquaintance with the Nabis, a heavily bearded group of avant-garde artists including Pierre Bonnard and Edouard Vuillard. The Nabis, who took their name from the Hebrew word for prophet, were meticulous observers of contemporary Paris.

Vallotton’s outstanding and provocative Bathing on a Summer Evening (Le Bain au soir d’été) of 1892-9 shows how he was beginning to be influenced by the flat planes of the Japanese woodcut tradition. The eroticism of the large depiction of white-clad female bathers shocked the crowds at the Salon des Indépendants where it was shown in spring 1893.

In random array are women of various ages and in various stages of undress.  Women being themselves in the interpretation of artists, for a change – or is there a playful ambiguity in the way they populate the picture? Art historians see something here of Cranach, Botticelli and Renoir, and it might even be read as a forerunner of surrealism. Although clearly a caricature of the historic idylls of bathing nymphs, for the over-sensitive Paris spectators it was too close to realism for comfort.

The open-minded Toulouse-Lautrec was one of the few who appreciated the work, even though he feared that the police might seize it.

Through the Nabis, Vallotton became part of a circle of writers, critics, and artists surrounding the cultural periodical La Revue Blanche, founded in 1889, for which he later became principal illustrator, gaining him prominence among progressives. Toulouse-Lautrec was among other contributors.

Looking to the draughtsmanship and unusual perspectives of his beloved Japanese prints, Vallotton drew workers toting heavy sacks, crowds in the rain and police charging protesters. He was struck by the contrast between such street scenes and the conspicuous consumption represented by the plethora of goods for sale in the new department store Bon Marché which he depicted in the religious format of a triptych. 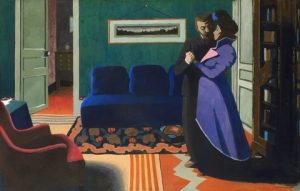 He was in touch with leading musicians. Misia, the wife of Thaddeus Natanson who founded La Revue Blanche was an accomplished pianist. Born Maria Zofia Olga Zenajda Godebska of Polish descent she was a patron and friend of artists including Renoir and Toulouse-Lautrec for whom she posed. For Vallotton, in 1898 in an unusual study done in distemper on cardboard, she is seen at her dressing table.

Misia (1872-1950) was a popular subject for the cover of the magazine. Through the Natansons, Vallotton was introduced to habitués of her salon such as composers Erik Satie and Claude Debussy, and writers Stéphane Mallarmé and Marcel Proust. 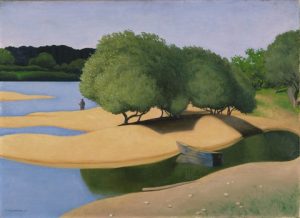 Sandbanks on the Loire

Franz Liszt had been a friend of Misia’s family, and in Paris she was a student of Gabriel Fauré. She married Natanson, who was her cousin, at the age of 21. Maurice Ravel dedicated Le Cygne (The Swan) in Histoires naturelles, and La Valse (The Waltz) to her.

A year before the portrait of Misia, Vallotton produced a woodcut on paper entitled The Symphony, perhaps an ironic title as it shows only the solo pianist, with four men peering at rather than listening to a woman pianist. Slightly earlier than that probably emerged a series of woodcuts showing one by one a sextet of musical instruments: cello, flute, violin, piano, guitar, cornet. The musicians are all in domestic settings and enveloped in deep, mysterious shadow. These works are from the Musée d’Art et d’Histoire, Geneva, which in all has lent 41 of the artist’s greatest prints.

La Revue Blanche was a ready vehicle for Vallotton’s prints until it closed in 1903.

His startling series Intimités (Intimacies), comprising 10 xylographs of intimate encounters, was published in 1898 by La Revue Blanche. In this collection, where each panel carries an ironic title, he sweeps the black ink across the block. This dramatically underlines the subterfuge under way in each cameo. In the panel Money, you do not know who is paying whom for what, observes curator Ann Dumas These xylographs each of 25 x 32 cm may be accounted his best-known works. 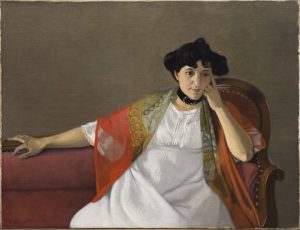 Their deceptively simple outlines satirise the sexual mores of the Parisian bourgeoisie – he drew back the curtain on the deceptions being played out in plush drawing rooms and bedrooms and in private clubs.  The starkness of the black – sharply reductive and retributive imagery as the gallery expresses it – turns up the heat and the hypocrisy of the scenes.

It is unclear what was behind Vallotton’s eagerness to lay bare these manifestations of a debauched society, but he went to it with a will, soon bringing rich but flat colour to oil paintings suggesting compromising situations between men and women in the drawing rooms of upper middle-class apartments. Such are The Lie (Le Mensonge) of 1897 from Baltimore Museum of Art, and two years later The Visit, on loan from the Kunsthaus, Zürich, both wickedly open to the viewer’s interpretation.

The settings are appropriately claustrophobic, even with the backdrop of open doors which may lead to bedrooms. 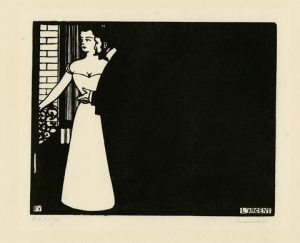 While scoffing at the foibles of the bourgeoisie, Vallotton was equally sensitive to the hypocrisy of French politics. Vallotton was among the Revue Blanche team who took the side of the Jewish army officer Alfred Dreyfus falsely accused of spying for Germany, and even painted a portrait of the writer Émile Zola, author of the open letter J’Accuse of 1898 excoriated the government. Vallotton produced a series of satirical woodcuts on the shameful affair, including The Age of the Newspaper, which were published on the front page of Le Cri de Paris on January 23, 1898. The controversy marked Vallotton’s definitive split with the Nabis.

Vallotton’s marriage in 1889 to the wealthy widow Gabrielle Rodrigues-Henriques brought him financial security, and allowed him to concentrate on painting instead of relying on his woodcuts for survival. This has dismayed many admirers in the art world, but he determinedly always set his own course.

Had he lived into the mid-20th century, his theme song would have been “I did it my way.”

Unexpectedly, he seems to have been troubled by his turn to domestic life, judging by pictures of his family – one shows him at dinner with them with the back of his head dominating the foreground and an unhappy step-daughter staring at him.

As with the pianist Misia – who was idolised by many suitors – his portraits could be unflattering, even of his wife Gabrielle. She is seen in a 1905 painting in a self-conscious pose and in capacious white dress, the colours of the image typically flat. This style did not go down well with some critics: one, writing in 1910 in the Neue Zürcher Zeitung, remonstrated that Vallotton “paints like a policeman, like someone whose job it is to catch forms and colours. Everything creaks with an intolerable dryness .. the colours lack all joyfulness.”

Vallotton continued to take a bleak view of his subject matter when from 1904 he painted the female nude in the tradition of such masters as Cranach and Ingres.

Just over a decade later during the First World War he returned for the last time to the medium of woodcut. He had been deemed too old to enlist, but passionate for his adopted homeland he produced a portfolio entitled This is War! Blood red ink is splattered on the cover, and six images in his old style of starkly contrasting black and white capture the horrors confronting the ordinary soldier.

Still in his individual mould are peacetime landscapes, largely empty of humankind, and still-lifes. The landscapes are based more on memory and imagination than real life observation. His flat technique brings forth what the curators call the “eerie stillness” of Sandbanks on the Loire from 1923. He spent summers at Honfleur which led him to paint sea-scapes.

Vallotton’s distinct approach was to find its legacy only in the German New Objectivity movement of the 1920s, the American painter Edward Hopper’s studies in alienation, and, it has been said, in the films of Fritz Lang and Alfred Hitchcock.

Félix Vallotton: Painter of Disquiet is at the Royal Academy of Arts until September 29, 2019

What a Market Mayhem Week that was amid perplexed Geopolitics