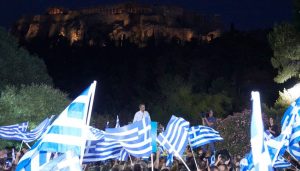 Kyriakos Mitsotakis speaks under the Parthenon

Kyriakos Mitsotakis topples Alexis Trsipras with an overwhelming majority; end of the story!

Centre-Right party Nea Demokratia headed by Kyriakos Mitsotakis  ridiculed the slogan “First time Left” of SYRIZA’s Alexis Tsipras who promised too much without the substance and the RWAD – Read, Willing, Able to Deliver policy. Promises makes debts and debts make promises. A few minutes before BST midnight – 02:00 Greek time Mitsotakis’ 40 centum of the vote and 158 MPs tells it all. A landslide but now he MUST work his programme and resurrect Greece. The Greek people and in particular the younger generations 18 to 40 year old ones need to see the change work!

The Shipping Industry too in its entirety expects a pragmatic treatment to all of its sectors. NO MORE EXPERIMENTS!

Congratulations to Kyriakos Mitsotakis and all his newly elected and re-elected MPs and we hope for the best for Greece. We also hope that SYRIZA and Alexis Tripras will do constructive criticism when same is needed but not dirty party politics!!!!