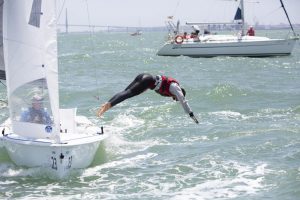 Sailors from Norway, Canada, Great Britain, Australia, Chinese Taipei and Brazil took the remainder of the podium spots after Sunday’s final showdown in the Spanish sun.

The star of the week was undoubtedly French 2.4mR sailor Seguin, who won silver last year and bronze in 2017.

He won nine out of the 12 qualification races to all but wrap up gold, and then took the Medal Race victory to seal an impressive overall points total of 15.

“When I’m winning, I am happy,” said an elated Seguin.

“We had 13 beautiful races this week and the final was very good – I made a good start and did the job.

“I’m really happy to be here for the Para Worlds but it was not easy! I’m satisfied with my performance, but the other guys were also very good, so I have to thank them.”

Seguin’s attention will now turn back to his Vendée Globe campaign.

“I have a transatlantic race in October from France to Brazil, and then I will prepare for next year’s Vendée Globe.

“I have a big, big job ahead of me and it’s a big challenge for me, but I’m really happy to have a sponsor, to have a boat, and to have the chance to compete in this fabulous competition.”

Antonio Squizzato (ITA) and Bjørnar Erikstad (NOR) finished second and third to take the silver and bronze medals respectively.

The RS Venture Connect semi-final was contested by six teams, while John McRoberts & Scott Lutes (CAN) went straight into the final as they topped the leaderboard after 17 qualification races.

Olmi & Di Maria won the semi-final and joined the Canadians in the final, along with Will Street & Johnny Currell (GBR) and Gabriel Barroso de Maria & Enrique Vives (ESP) who finished second and third respectively in the penultimate race.

And in a dramatic winner-takes-all final, it was the Italians who pipped the Canadians to gold, with last year’s champions Street & Currell finishing third to take bronze.

“We had a very good race in the semi-final and we both had a great feeling. We really believed we could win the final.”

“To win the World Championships at 18 years old is a great achievement and I’m really pleased,” added Di Maria.

“We don’t know what we will do next in the RS Venture, but I will continue in the 2.4mR and other classes because I love sailing.”

And what’s next for Olmi? “Well, I don’t know…I’m a little bit old!” he laughed.

“But I will be sailing in the Sonar at Lake Iseo, northern Italy, for its annual championship.”

In the Hansa 303 Men’s class, Cichocki has dominated all week and today clinched the 2019 title with a Medal Race victory, finishing 19 points ahead of the rest of the pack.

“I was feeling comfortable because I had a big lead and I knew there would be a fight for second and third, but I stayed focused.

“Last year I lost my title and this year, after a long regatta of 13 races, the title is back with me, so I’m happy.”

Chris Symonds (AUS) and Chi-Chian Wu (TPE) did enough in the final race to hold onto their respective second and third positions.

The Hansa 303 Women’s class was not so clear-cut, with most of the six-boat Medal Race fleet still in with a chance at a podium spot.

But it was del Reino who kept her composure to clinch the final victory and with it, the gold medal in her home country.

“I feel great; I had a fun battle today which I really enjoyed and I’m very pleased to win gold,” she said.

“I got a bad start and Alison (Weatherly) passed me. I thought ‘I’m done, but never mind, I’ll keep fighting,’ and I didn’t give up.

“Halfway through I passed her and knew I had a chance; I held on and in the end it was all okay.

“I haven’t actually sailed here before, so it was new to me too, but being at home was nice and I got lots of support, which really helped.”

Click here to watch highlights from the final day of racing