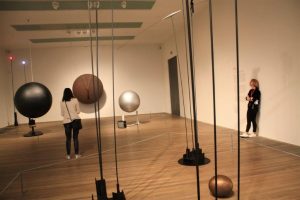 In the magnetic orbit of Takis.

At the age of 93, the Greek artist Takis is working full tilt. In his hillside studio overlooking Athens, the “sculptor of magnetism, light and sound” is exploring solar power and other alternative energy sources for his sculptural toolkit.

“I know how to use energy,” he asserts, and this is backed up resoundingly – sometimes deafeningly – by his largest exhibition in the UK which continues at Tate Modern until October 27, 2019. It is an eclectic and electrifying display of kinetic art. 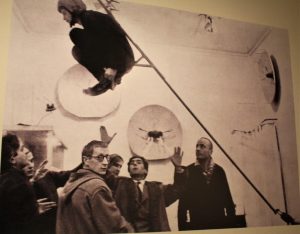 His confident knowledge of energy means “I feel younger than you,” he tells a friend of more than 30 years, in a film recently made for Tate with the support of Bloomberg Philanthropies. That friend and collaborator is the critic Guy Brett, whom he met in London in the 1980s, and who is co-curator with Michael Wellen of the Tate for the stirring new exhibition. Tate Modern is the ideal place to showcase works by a maestro of kinetics – the premises is a former power station that closed in 1981 and houses several top contemporary exhibitions at any one time, to the delight of hordes of visitors and school parties. 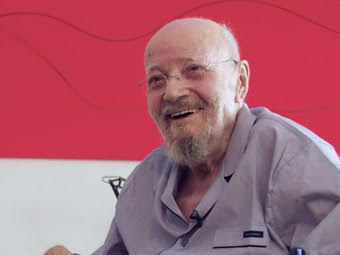 Takis (a common nickname in the Greek-language world and the pseudonym of Panagiotis Vassilakis) has been below the radar to much of the art world in the last few years, but he has never stopped transforming invisible forces into physical presences in his workshop which Michael Wellen says is blessed with a magical setting, higher than the Acropolis and with strong magnetic fields.

Exploring magnetism and sound, he makes material objects sing, dance, smile and even flirt with each other. Gaze upon what would otherwise be ordinary and lifeless flotsam and understand how he has used it to pioneer a new music and a new language. 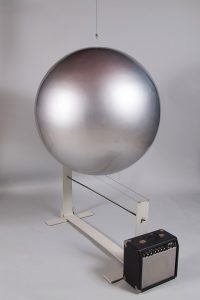 Since he discovered in 1959 magnetism as a way of sculpting in defiance of gravity, he has exploited its possibilities in every way he can. One of the earliest projects of this type, illustrated in the exhibition, was to perform L’Impossible – Un Homme dans l’Espace (The Impossible – Man in Space). This was not just any man – it was a poet. That was in 1960, six months before Yuri Gagarin soared aloft as the first human to orbit the earth.

This revolution in the field of sculpture, which had seemed unimaginable, was staged in a gallery in Paris as his friend, the South African poet Sinclair Beiles, “throws himself in the air” hovering briefly under the force of a magnet attached to his belt. Moments earlier, Sinclair Beiles read what was called a magnetic manifesto: “I am a sculpture… There are more sculptures like me. The main difference is that they cannot talk… I would like to see all nuclear bombs on Earth turned into sculptures …” 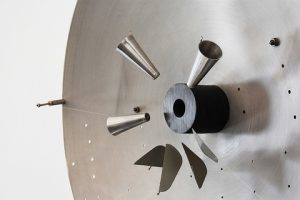 Guy Brett has said that the spectacular 1960 Man in Space installation “represented a kind of collision between three worlds: the world of art, that of science and contemporary reality… By condensing pure energy, without revealing anything to see or touch, magnetism fills a gap, a void in space and exposes the presence of matter by its very absence, while demonstrating that matter is energy.”

In the London exhibition there are no human aerobatics but plenty of kinetic pyrotechnics played by ranks of quivering lit-up antennae he calls Signals, and impulses of radar. Flower-like sculptures are brought to life by magnetic pendulums swinging above them. Warning: the thunderous sounds of his Gong can be wearing on the eardrums. More gentle are Takis’s Musicales from 1985-2004 and his Silver Musical Sphere. 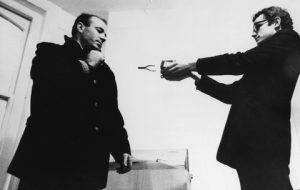 Photograph of Takis and Guy Brett 1966.

Signals was inspired by the technical installations and lights he saw when waiting for a train at Calais station.

Guy Brett said that Takis breaks with convention and brings a sense of happiness and joy. He reminded us that Marcel Duchamp (1887-1968) a pioneer in the use of prefabricated objects as artworks, whom Takis met on his first trip to the US in 1961, called him “the happy ploughman of the magnetic field.” 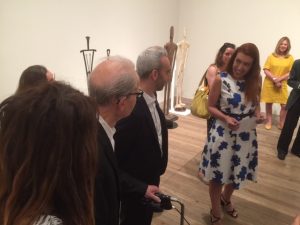 In London for the opening of the Tate exhibition was Menia Kouli, director of public affairs for the Takis Foundation. She said that the Foundation – established in the Greek capital in 1986, and the home of the artistic work and research of Takis ever since – aims to promote knowledge and appreciation of the visual arts to the public, and provide services, facilities and support for education and contemporary art.

The Foundation include a museum, theatre, gardens, and the atelier of Takis, with distinctive works from his 70-year career and pieces created by friends from Greece and overseas. Takis has said that there is no visitor to the foundation who does not feel the “magnetic tranquillity this place gave to their body.”

In another venture, Takis produced “abstract, naked space music.” He had prophesied what would be learned of the music of outer space, by looking to what ancient people called the music of the spheres. Now scientists have discovered some of the properties of black holes and celestial bodies. Takis allows the physical properties of his materials to determine the musical score. Michael Wellen suggests that in a room at the show dedicated to the music you should “take 30 seconds to meditate with it and feel the space sounds.”

One of the most mesmerising installations is Magnetic Ballet from 1961 which comprises a suspended ball and cork with metal bases which leap and dance in response to electromagnetic charges. The objects are “always flirting with each other; sometimes they embrace, sometimes they push away” says Michael Wellen. 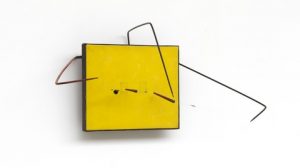 Takis is well versed in modern Greek history: his childhood and adolescence where in a country under the occupation of Germans and Italians, followed by the Civil War. As a young man he took great interest in ancient sculpture, and after that the modernists including Picasso and Giacometti, evident in some of his earliest works on display at Tate. In 1954, he began to live in Paris and London, where he made his first kinetic works.

Tate’s display of some 80 works is a guided tour of his tenacity in his chosen field. In the 1960s, influenced by among other impulses “the cosmic powers and communication with the beyond”, he created Télésculptures and Télépeintures (Telepaintings), Téléelumieres (Telelights), Cadrans, and Musicales.

In 1968, he was in Massachusetts, where he produced a series of electromagnetic sculptures, and studied hydrodynamic energy which resulted in a project called Oscillation of the Sea,.

In addition to his sculpture the artist has made scenery and musical curation for plays and performances, including a collaboration with Costa Gavras for the film Section Spéciale (Special Court) in 1975.

In 1983, the French art critics Pierre Restany wrote: “He is at once Daedalus and Orpheus, the architect-engineer and the poet-musician…The whole of Takis’ oeuvre is centred on the imagination of space, its music and infinity.

Visitors are asked to muse on a quote taken by Takis from Plato (428–348 BC), who talks of an artist “turning the invisible world into the visible.” Takis adds: “I hope that someone seeing my sculptures is lifted out of his ordinary state.”

Takis, Sculptor of Magnetism, Light and Sound is at Tate Modern until October 27, 2019. Open daily 10am-6pm and until 10pm on Fridays and Saturdays. tate.org.uk. Exhibition organised by Tate Modern in collaboration with MACBA Museu d’Art Contemporani de Barcelona and the Museum of Cycladic Art, Athens.