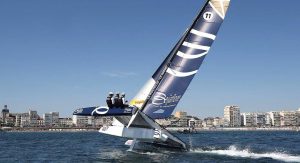 Valentin Bellet and the Beijaflore team won the 32 nautical miles Act 4 coastal race off Les Sables d’Olonne today. As the seven stage 2019 Tour Voile passes its theoretical midway point today, the team which finished third on their debut in 2017 and were last year’s runners up are now six points clear at the top of the Tour’s General Classification. Consistency has underpinned the Beijaflore performance to date. Although today’s win is just their second – both coastal races – achieved today by a comfortable margin in Mediterranean sunshine conditions in Les Sables d’Olonne and light, 6-12kt winds, the five strong team has three third places, a second and a fourth on an impressive scoreline which reveals they are the Tour’s most regular podium finishers.

“We were inspired today because our navigator Julien did a particularly good job again, helping us manage the transition from the light gradient as the seabreeze came in. We had a modest start and then just focused on picking boats off. But once we were ahead it was a bit less stressful than Jullouville and we were able to extend.” Confirmed skipper Bellet after finishing.

Once more today their game plan was a model of risk management. Eighth during the first hour of the coastal circuit which was raced off Les Sables d’Olonne’s long sandy beaches. They took over the lead from nearest rivals Cheminées Poujoulat on the fourth leg and were nearly five minutes clear after more than four hours of racing.

Having been pipped to second on the finish line of the shortened Jullouville coastal race, the young European team on Pink Lady-Pays de L’Or Sud de France did not let it slip away today. In fact as today’s trio on board, helm Gaby Scocjek an ex 49er racer, Italian Jacopo Rizzi and Lucas Chatonnier, they had nearly halved the winners’ margin during the last hour of the race. Their second brings the Centre d’Entrainement Méditerranée team, which is sponsored by the global apple brand, to tenth overall.

Trimmer Rizzi said, “It was tricky at first because we knew we had to pass the transition between the two winds, it came a little bit sooner than expected but we were aware and crossed early. We knew it was coming. As soon as it died we were across and did well. After that it was a bit of a horse race, just go fast for the marks and don’t let the other teams pass.”

While second is the best finish yet over the two years the Pink Lady team has been in this European form, today’s tenth is the high water mark so far for the 100% Omani amateur team on Team Oman Sail, smiling skipper Akram Al Wahaibi said, “We had a good start, good wind, good strategy and that made a good race. We had much better communication on board, especially coming to the marks and that made a difference. This will give us more confidence for tomorrow and the stadium races.”

Stevie Morrison and Renaissance Services crew paid a price for being the leaders as the breeze transition happened earlier than expected, they had the choices to protect inshore as leaders or gamble offshore at the bottom of the first downwind. They chose the former and lost touch with the leading group, finishing ninth.

“We went for the land breeze and the sea breeze was the one. But the sea breeze did come in quick enough. We got hammered relative to the guys who got away. But two years ago the sea breeze threatened to come in and it didn’t and half the fleet were timed out. We worried about that. And we had had no hint of sea breeze. But this time it did. That’s coastal races though.” Morrison recalled

While sailing fans who follow the Vendée Globe will be more often used to seeing the jewel in the Vendée crown in angry November mode, or indeed in chilly late January welcoming the solo skippers back, in peak summer it is a busy, chic, bustling beach resort which increasingly enhances its reputation for excellent restaurants and a its long corniche promenade where there is activity from early morning until late evening.