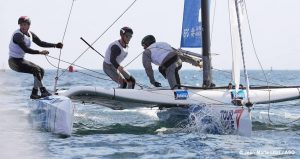 Stevie Morrison the Oman Sail team on Renaissance Services became the only team on the 2019 Tour Voile to win three Stade Nautique finals when they emerged triumphant from the most exciting stadium showdown yet, contested on Bastille Day in a gusty offshore breeze off Les Sables d’Olonne. Renaissance Services added the Les Sables d’Olonne stadium win to successes on Day 2 in Dunkirk, and the Act 2 win in Fécamp and now today racing off the beaches of the town most usually associated with the solo nonstop round the world race, the Vendée Globe. The team skippered by the British double 49er are now fourth overall, their unmatched record of stadium wins unfortunately weighted down by missing the Final on Day 1 and in Jullouville and by being forced to retire from the Fécamp coastal with rudder damage.

“To be honest I would now rather win a Coastal Race but it seems that when we make the Stadium Super Finals we are on fire!.” quipped Morrison whose ready, self deprecating humour is making him a favourite among the French Tour fans, “Today it was a bit like Super Mario Cart racing but we seemed to do well.”

Morrison, Quentin Ponroy – who won the Tour when Lorina Limonade dominated in 2016 -and Abdul Rahman Al Mashari – made a perfectly times and positioned start which allowed them to lead at the first mark. Thereafter they were challenged by the young European team on Pink Lady – Pays de L’Or – Sud de France but the Oman Sail flagship program stayed ahead to win comfortably.

“The wind came back blowing offshore. The land is very hot and so it was very unstable. We had an idea from watching the race before. Yesterday we tried to come to the shore to find the wind and it did not work. Today it did.” Morrison recalled, “To win the Final is great fun but we came here to win the Tour de France and that seems unlikely now. When it is gusty like that you want to be up the line to get the gust first. The whole fleet was thinking that and we could be a bit more aggressive because of that.”

Morrison reflects: “We seem to do a good job in the final. I think we have different pressures to the top three guys. With the rudder falling off and a couple of our coastal races the overall is not where it should be. That is very frustrating. It is nice to be here being applauded for winning here today but we are here to win the Tour de France and we have made that very hard for ourselves. It is not impossible. But we can see 30 or 35 points we have left on the coastal races. If they had been a couple of top fives we would not be too far off the top of the leaderboard. That has to be frustrating.”

In contrast Beijaflore, the Tour leaders, had their worst result yet. They found a light wind hole on the first round after splitting from the fleet and finished seventh in the eight boat final. With second placed Cheminées Poujoulat taking third today Beijaflore leave the Atlantic coast and head for the Mediterranean’s three final Acts with their lead cut from six points this morning to two. Cheminées Poujoulat went 3,3 for the weekend to keep the pressure on the leaders, as their Gaulthier Germain commented, “Another podium! That feels even better higher because both our main rivals were behind us. And more to the point we see that the leaders can also finish second to last. It remains completely open. We are all but even, the three of us, Beijaflore us and IXIO! ”

Making the Final for the second time on this Tour, and following up from their excellent second in yesterday’s Coastal, the young European crew in Pink Lady took fourth today and so are the joint best scoring boat of Act 4 Les Sables d’Olonne, moving up to ninth on the leaderboard.