‘A British First’ cruise call for Port of Southampton 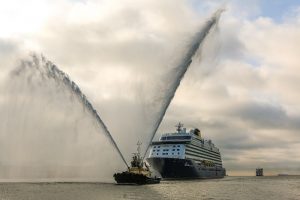 ‘A British First’ cruise call for Port of Southampton

The Port of Southampton has rolled out the red carpet to welcome guests from Saga Cruises’ newest cruise ship on her maiden voyage around the UK.

Passengers on the Spirit of Discovery, Saga Cruises’ first of two new-build ships, were welcomed to the city on 22 July. The maiden voyage titled ‘A British First’ is touring the UK giving passengers a taste of best of the UK.
A few weeks after her naming ceremony on 5 July when the Duchess of Cornwall officially became the ship’s Godmother, the Spirit of Discovery called at Europe’s leading cruise turn-around port to the welcoming sound of a local children’s choir, Showcase Music School.
A traditional plaque and key ceremony was held during the ship’s maiden call with the Captain exchanging plaques with Alastair Welch, Port Director.
The ship can accommodate 999 passengers and boasts a boutique and luxury experience for its guests.
Alastair Welch, ABP Southampton Director, said: “We’re proud to be a transit call on the Spirit of Discovery’s maiden voyage. Saga Cruises has been a long-standing visitor to the Port of Southampton for many years and this new vessel is an example of high-end, boutique cruising.”
The Spirit of Discovery’s transit call to Southampton will mark nearly 300 visits from Saga Cruises since the cruise line started in 1997. Each cruise ship call is estimated to be worth £2million to the economy.
Port of Southampton
0 comment
0
FacebookTwitterLinkedinEmail