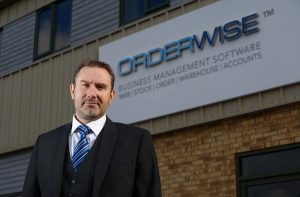 OrderWise founder and CEO David Hallam has been named as a finalist in the Midlands Family Business Entrepreneur of the Year category at this year’s Natwest Great British Entrepreneur Awards.

The Great British Entrepreneur Awards celebrate the incredible stories that have taken entrepreneurs to where they are today, regardless of size or turnover. The 2019 Midlands regional final will take place on 18th July in Birmingham, to welcome the 93 finalists across the region that have been shortlisted in 12 different categories.

David has also been shortlisted for a  Tech Leaders Award and is hoping to win in the Digital Leader of the Year category. The 2019 Tech Leaders Awards ceremony will take place on Thursday 12th September at The Royal Lancaster Hotel in London.

OrderWise has also been nominated for the Innovation Award at this year’s  Lloyds Bank National Business Awards.

David said: “July is turning out to be a successful month for OrderWise! I’m honoured to have made the shortlist for two prestigious awards and I’m delighted that our new robotics technology has been shortlisted for yet another innovation award!

“We’ve received such positive feedback about our new robotics – and I’d like to thank my entire team for all their hard work behind the scenes to make sure we deliver the best cutting-edge solution to our customers.

“We hope that the good luck continues in the coming months and hopefully a few more trophies make their way back to Lincolnshire!”

Earlier this month OrderWise welcomed over 200 delegates to its annual client expo to unveil its latest shelf-moving robotics technology. During the day, visitors got to see exactly how the robots operate in a warehouse setting during live demonstrations while also hearing a range of useful business talks.

OrderWise’s robotics technology has now been nominated for the Innovation Award at this year’s  Lloyds Bank National Business Awards.  The winners of this year’s awards will be announced during a ceremony at The Grosvenor House in London on 12th November.

The Innovation Award recognises the company that successfully applies any form of innovation, celebrating the ideas that have had the greatest impact on an organisation, company or industry. OrderWise will be competing against DPD UK amongst nine other businesses to be named category winners.

OrderWise has enjoyed a successful start to the first half of the year; the company made it to the top three in the Digital Leaders 100 list and won in the Innovation in Manufacturing category at the regional Lincolnshire Technology and Innovation Awards last month.