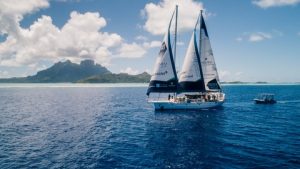 Under The Pole III has arrived in French Polynesia. After a couple of weeks of workshop with the scientists of the CRIOBE to prepare for the upcoming scientific program ”Deep Hope” focusing on mesophotic corals, the program is done in Moorea and Bora Bora is the next island to be explored.

Bracknell, UK. 26th July 2019 – Panasonic, Europe’s leading rugged computing device provider, has equipped the scientific underwater exploration expedition “Under the Pole III” with TOUGHBOOK 33 devices. The Under The Pole expedition team is crossing the polar seas from the Arctic to the Antarctic on board the polar schooner, “WHY”, in order to explore the biodiversity of the ocean twilight zone and push the boundaries of underwater exploration. 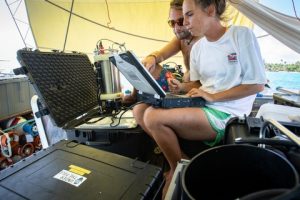 Under The Pole III is in French Polynesia. After completing the survey of two sites in Moorea with the scientists of the CRIOBE, the ”Deep Hope” program focusing on mesophotic corals has been done in the Society and Leeward Islands. The boat has arrived in the Tuamotu. After a first stop in Makatea, the team temporarily settles down in Tikehau for the exploration of two sites.

To ensure the navigation software works properly and to record all the scientific data collated every day, the crew needs rugged computers capable of working 24/7 for the full 17 months that the expedition is expected to last. The TOUGHBOOK 33 is multifunctional and enables users to execute scientific topographical surveys of the expedition and access the vital elements provided by the navigation systems. Users can also connect to the Iridium satellite system in order to send and receive data which is often critical for the team’s safety and the success of the expedition.

“The TOUGHBOOK 33 is an essential tool for Under The Pole’s everyday operations thanks to its rugged build quality,” said Bastien Brionne, Communications Director, and Erwan Marivint, Head of Partnerships, for Under The Pole expeditions. “The equipment is seriously put through its paces during exploration work. The divers sometimes have to deal with temperatures below –1°C under the water and –30°C out of the water. The TOUGHBOOK can withstand extreme temperatures, as well as knocks, bumps and humidity. We needed an exceptionally reliable computer for all of our expeditions both in the North Pole and in French Polynesia.” 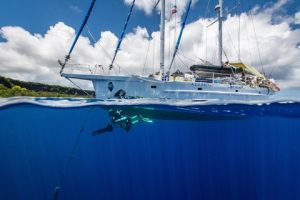 Under The Pole III has arrived in French Polynesia. After a couple of weeks of workshop with the scientists of the CRIOBE to prepare for the upcoming scientific program ”Deep Hope” focusing on mesophotic corals, the program is done in Moorea and Bora Bora. Next archipelago to be explored: the Tuamotu islands.