Marine and logistics company, Williams Shipping, is celebrating its 125th anniversary in 2019. 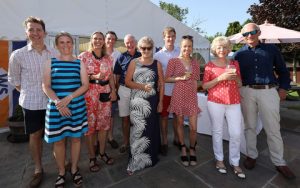 Marine and logistics company, Williams Shipping, is celebrating its 125th anniversary in 2019.

With headquarters in Southampton and offices in Pembroke and Aberdeen, the company provides specialist services and expertise to the transport, marine, construction, engineering, defence, renewable energy and shipping industries. It has worked with a number of leading companies including MHI Vestas Offshore Wind, Boskalis Westminster, Esso, the Royal Navy and Valero.

Williams Shipping was founded in 1894 by George Williams, who was then joined by his son, Jim, at the age of just 13. Today, the company is run by the fourth and fifth generations of the Williams family with Eric Williams as Chairman.

Fifth-generation Philip Williams joined the company in 1997, and today heads up the company’s Marine Services division. He said: “Williams Shipping has a reputation for reliability, expertise and quality of service, a reputation which we are truly proud of. Those values are just as important today as they were over a century ago.

“125 years in business is a fantastic achievement in itself, but we are continuing to grow. 2018 was a really good year for us and we are expecting 2019 to continue that trend with a lot of interesting projects in the pipeline.”

The company assists the UK’s marine industries with a broad range of services including towage, craneage, stores deliveries, equipment hire and crew transfer. It has been involved in many significant projects over the years, with some of the most recent including:

Williams Shipping is planning to make its anniversary by supporting the Southampton Hospital Charity alongside other local charities within the communities it serves, and holding a party open to all its 100 members of staff and their partners.

To conclude, Eric Williams, Chairman at Williams Shipping said: “When you have been in business for as many years as Williams Shipping, we can’t think of a better way to celebrate than by giving back to the local area. We intend to be a part of these communities for many years to come.

“I’d like to take this opportunity to personally thank each and every person who has been instrumental in supporting us on our journey, and it is with great pride, excitement and confidence to take the company forward to the next 25 or even 125 years in business.”