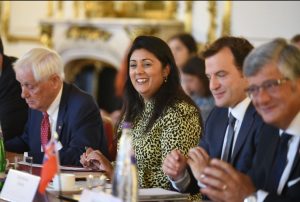 London International Shipping Week 2019 (LISW19) once again exceeded all expectations by welcoming thousands of global shipping industry leaders to more than 200 official events throughout the week.

Initial estimates placed the number of UK and international visitors at approaching 20,000 but this figure could rise even further when the number of ‘unofficial’ events are considered.

The UK government used the week to host bilateral meetings with government delegations and senior industry figures to explore partnerships, future opportunities outside the European Union and examine how to help significantly boost maritime exports.

It really was a week of business with event organisers reporting very strong attendances at their events. Such was the interest of the varied subject matter under discussion and the high quality of the venues, that the opinion was that LISW19 was truly a global must-attend event.

Charities associated with this year’s event also declared the week a tour de force with £11,000 raised at the headline LISW19 Gala Dinner alone and the £155,000 collected at the Sixth Annual Dragon Boat Race taking total contributions for that event to over the £2 million mark.

LISW19 prides itself in the close association it has with the four maritime charities – Apostleship of the Sea; Sailors’ Society; Seafarers UK; and The Mission to Seafarers. And the OSCAR Campaign’s Dragon Boat Race has proved to be a highly popular end-of-week event during LISW.

Llewellyn Bankes-Hughes and Sean Moloney, founders of LISW and Directors of Shipping Innovation, organisers of the event, said LISW19 exceeded all expectations with industry leaders rubbing shoulders with politicians and regulators from the UK and abroad.

“We were delighted to enjoy the support of 13 UK Government Departments and even welcomed the Prime Minister Boris Johnson onto one of the three naval vessels that visited London as part of London International Shipping Week.

“The number of international trade associations and individual companies wishing to become part of this amazing week of events continues to grow and underlines London and the UK’s important role in helping to mould the international shipping and maritime sphere,” they said.

“The energy, enthusiasm and hard work demonstrated throughout the week by Maritime Minister Nusrat Ghani MP, who must have attended at least half of the 200 events taking place, raised the level of discourse between Government and Industry and added kudos to the week” said Llewellyn Bankes-Hughes.

He added “The presence of the Secretary of State for Transport, Grant Shapps MP; HRH The Princess Royal; and the drums and bugles of the Royal Marines at Banqueting House, lifted the week to even greater heights.”

BIMCO Dry Bulk Shipping 2019/3 report: Rates may have climbed out of the abyss, but challenges remain in place for the autumn