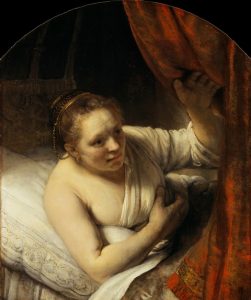 A Woman in Bed.

Boom and bust. That was the economy of Amsterdam in the mid-17th century, and so it was with the career of Rembrandt, despite the wide recognition of all his brilliance at the time.

Rembrandt had moved in 1631 to set up his studio in the most prosperous port in northern Europe, a place ‘crowded with merchants from every nation’. In trade, the city surpassed Antwerp, Genoa and the Hanseatic states, and its intellectual verve offered a milieu far more inspiring than his native city of Leiden. To underline their status, the most important families and organisations in Amsterdam liberally commissioned paintings.

We share the secrets of one of the greatest painters of all time at his peak in a must-see exhibition at Dulwich Picture Gallery marking the 350th anniversary of his death (October 4, 1669). It is entitled Rembrandt’s Light, elucidating his practice through 35 of his most important paintings, etchings and drawings.

A Woman bathing in a Stream.

Such is his feeling for light and narrative as well as the contemplative and spiritual vision that had he been alive today, he would have been a film maker rather than a painter, it is suggested. One or other elements of the dynamic power of lighting is shown up in every composition.

This is indeed Rembrandt as high drama, and Dulwich brought in a leading cinematographer to help reflect the variety and virtuosity of the Dutchman’s handiwork, seen here to include loans from UK galleries and the Louvre and Amsterdam’s Rijksmuseum.

Experimenting at every opportunity, Rembrandt produced impulsive and forceful works as wealth flowed in to the increasingly international, coursing metropolis.

The exhibition focuses on his middle period from 1639-1658, when he lived at Breestraat in the centre of the city, premises which today are transformed into the Museum Het Rembrandthuis. From his studio, where light poured in through large windows, emerged some of his most exceptional works including The Denial of St Peter and The Artist’s Studio. Curator Jennifer Scott, a specialist in Dutch and Flemish art, emphasised the way Rembrandt used light to convey raw emotion. 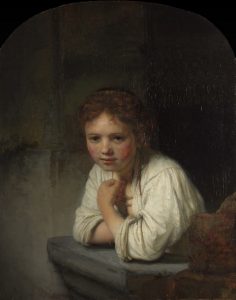 Girl at a Window.

The city was becoming the heart of the art market for all Europe, and he was able to demand high prices, although it is believed that financial gain was not a prime motivation for him.

According to the website of the National Gallery in London, which has contributed loans to Dulwich, many of his contemporaries had started to experiment with the dramatic use of lighting developed by Caravaggio, “and the influence of Caravaggio is evident in Rembrandt’s work from the 1630s. He developed a new way of describing faces with patterns of light and shadow, rather than simply lighting one side and shading the other. Shadows around the eyes of his portraits make it hard to read a precise expression give his canvases the extraordinary impression of the living, thinking mind behind the face.”

In the 1650s Amsterdam suffered a reverse – a big economic depression, leaving Rembrandt and others in debt.

With the city and his personal fortunes in the doldrums, he was forced in 1656 to declare insolvency and successfully applied for bankruptcy protection, but his goods, including many paintings, were disposed of in distress sales. Rembrandt, his son Titus and partner Hendrickje moved to a poorer district. He continued to make studies from life, and in his last 20 years painted self-portraits with increasing frequency, bringing the total to around 100 in his lifetime.

It seems that Rembrandt was far from selfish with his marvellous talent, although none of his students could match the master. For his lectures he would create new compositions, rather than simply copying from what had gone before, as others would. He did not leave a manual for his followers, but what we have are works showing him teaching, demonstrating how light behaves in different scenarios. This is evident in a section of the show called Manipulating Light, which entices the viewer to Rembrandt’s workshop, as in his drawing The Artist’s Studio, from around 1659.

Some of the grandest, most immediate, highly lifelike and intriguing works are in the exhibition’s final room. These include three of his most famous paintings of women.

Dulwich’s Girl at a Window from 1645 is displayed for the first time alongside A Woman in Bed, painted around the same time, and on loan from National Galleries of Scotland.

Girl at a Window is one of the great enigmas of art:  who is the girl in this realistic portrait with its three-dimensional illusion? A servant or a prostitute, for instance: more likely the former. The gallery says of the brightly lit image: “Leaning on a ledge, she stares directly out of the painting while fiddling with her necklace, either a gold chain or a cord, like that seen around the cuffs and along the seams of her loose chemise… The confident brushstrokes and impasto paint is typical of Rembrandt’s style of the 1640s… He was aware that areas of raised paint around her face would catch the light when the work was lit from a particular angle.” 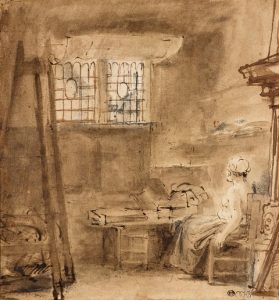 Also seducing the viewer is A Woman in Bed, which, says National Galleries of Scotland, is “tantalisingly real. The illusion is enhanced by the strong lighting directed from the left and the contrasting deep shadows.” There is overt sexuality as she knowingly beckons to someone she hears approaching and draws back the curtain to see who it is.  A dim candlelight flickers. By placing lighter tones next to dark ones, the artist was able to make specific areas, such as the woman’s arm, appear closer, while the back of the bed recedes.

Adjacent is A Woman Bathing in a Stream from 1654 (National Gallery, London). Thinking that only her lover, the artist, can see her, a young woman lifts her chemise and steps into the pool, observing her reflection. It feels as if we are being invited to share a private moment. The model was almost certainly Rembrandt’s partner Hendrickje, who gave birth to their daughter the year this portrait was made.

During his financially troubled times, Rembrandt was given some commissions, including in 1657 by the wealthy Catrina Hooghsaet, a 50-year-old married lady who lived apart from her husband. The church has shunned her, but her portrait shows that she is a strong, determined woman. The light source illuminates her face and draws attention to her ornamentation, lace collar and her pet parrot. The whole emphasises her wealth and status, while giving a sense of her liveliness and warmth. 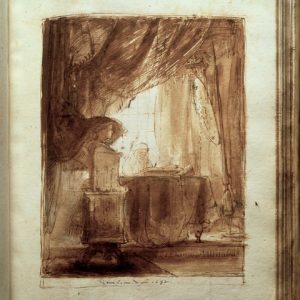 Minerva in her Study.

The self-portrait of 1642, from the Royal Collection Trust, shows a mature artist who is strong and confident even though he is not dressed in the finest clothes.  Light falling from the left highlights his focused gaze, while casting the lower half of his face in shadow. This portrait was made in the same year as his large-scale masterpiece of a private militia company, The Night Watch which is in the Rijksmuseum, Amsterdam. The latter is set in daytime, rather than at night as some assumed from its dark tonality before it was restored and cleaned.

A book containing two personal entries by Rembrandt appears outside of the Netherlands for the first time since it was made in 1652.

The Album Amicorum (Friendship Book) of Rembrandt’s influential friend and patron, Jan Six (1618-1700) is displayed at a page showing the intricate drawing, Minerva in her Study. This and Homer Reciting Verses (two pages earlier) are the only known drawings that Rembrandt dedicated to an acquaintance. The loan is from Baron Jan Six van Hillegom, a direct descendant of Jan Six. 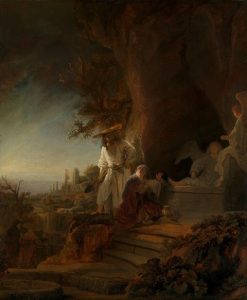 Christ and St Mary Magdalen at the Tomb.

Rembrandt’s use of light in the Minerva piece draws out the symbolism of the Roman goddess’s attributes, while flattering his magistrate friend, who, like Minerva was seen as a protector of culture and learning.

The first room is aptly called The World of Theatre and highlights the influence of contemporary theatre – a playhouse had opened in Amsterdam the year before he arrived there. Works in this section include The Denial of St Peter and The Woman Taken in Adultery, with characters as though they are actors on a stage, a stage before which we are present. He shows softness in the darkness.

Other highlights include the captivating Philemon and Baucis, shown in the UK for the first time, and the contemplative Christ and St Mary Magdalen at the Tomb where dawn breaking over Jerusalem echoes the dawning recognition by the characters in the scene.

In-house curators Jennifer Scott and Helen Hillyard collaborated with the award-winning cinematographer, Peter Suschitzky, known for his work on films including Star Wars: The Empire Strikes Back and Mars Attacks! to “devise an atmospheric visitor experience.” 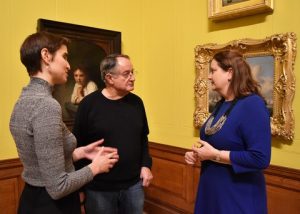 Peter Suschitzky, who is 78, said:

“I have been inspired by the work of the greatest Old Masters throughout my life, so to have the opportunity to work with some of Rembrandt’s finest paintings is hugely exciting. Rembrandt seems to me to have been striving to find a universal truth in the human condition and used light to create motion and emotion. This parallels cinematography, where sculpting light and directing the gaze of the viewer to the desired place in an image is essential for powerful storytelling.”

An attractive innovation is that the wall labels comment on the artist’s lighting effects, categorising in turn exterior and interior scenes.

Rembrandt’s Light is at Dulwich Picture Gallery until February 2, 2020.

Mild fall with the BDI@1,916 and a surge in the Wets from the Cleans too… Geopolitics still very perplexed…