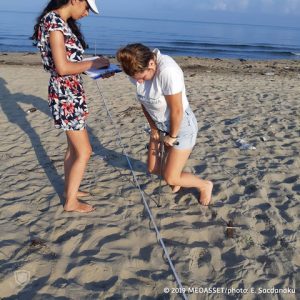 The second year’s fieldwork of “Exploration of potential nesting sites and design of conservation measures for sporadic nesting in Albania “(2018-2019) has successfully been completed. This year the survey focused on the beaches which were identified from our 2018 survey with high and medium nesting suitability.

In spring, our collaborator Dr. Enerit Sacdanaku with the help of Albanian officials and fishers placed three aqua loggers to collect sea temperature data; one was placed in the South at Bunec beach, one midway along the Albanian coastline at Divjaka beach and one in the North at Rana e Hedhun beach. These provide complementary data to the suitability of the beaches, as to if the Albanian waters reach a warm enough temperature for long enough period of time for female turtle eggs to internally mature to enable her to nest. 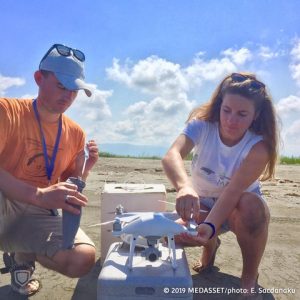 During June the research team led by Dr. Enerit Sacdanaku started the survey to co-inside with the beginning of the nesting season in the central Mediterranean, with an increased focus on monitoring nesting activity as well as recollecting data on beach parameters. The focus was to evaluate their suitability for supporting sea turtle nesting by combing two different methodologies: beach transects and drone images. During this period, 14 temperature loggers were placed in seven different beaches to measure the sand temperature, to gain a greater understanding of Albania’s beaches suitability for incubation of any potential nests.

In August and September, the monitoring effort continued with concentration on high priority beaches, to identify any nests, this time by tracks left by hatchlings. Approximately 35km of coastline was monitored during 2019 and no nests were recorded this year. The completion of the research study took place in October with the successful removal of all sand loggers and the two aqua loggers. 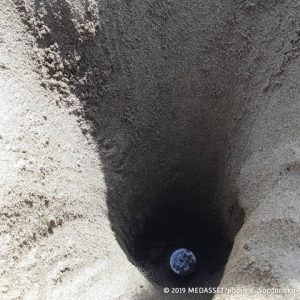 In addition, our survey team collected sand samples from the high suitability beach at Divjaka National Park, where the first official nest in Albania was recorded last year. The sample will be sent to England to support an Exeter University global study on the effects of microplastics on sea turtles nesting sites.

All survey data will be analysed and presented to the Albanian authorities and stakeholders in a dedicated meeting and further monitoring and conservation strategies will be discussed.