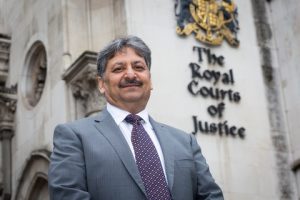 Captain Arshad Rashid outside of The Royal Courts of Justice.

In an unprecedented case for the oil and marine industry, the Oil Companies International Marine Forum (OCIMF), regarded as the voice of safety in the oil sector, which had been lambasted by the High Court in London for unlawfully removing the accreditation of one of its long standing and most experienced accredited ship inspectors, Captain Arshad Rashid, has now been denied leave to appeal the decision by the Court of Appeal.

This case marked the first time a ship inspector had ever challenged an accreditation body, and the decision has sent shock waves through OCIMF and its membership of 109 oil companies around the world including all the international oil majors and the majority of national oil companies.

After the initial ruling on 16 August 2019, OCIMF sought permission to appeal from the trial judge, Mr Justice Martin Spencer, which was denied. Following this, on 20 September 2019, OCIMF filed with the Court of Appeal a further application seeking leave to appeal. After reviewing OCIMF’s submissions and Captain Rashid’s response, the ruling of Lord Justice Males on 25 October 2019 refusing the application, confirmed that OCIMF’s appeal had no real prospect of success and forcefully re-affirmed the trial judge’s severe criticisms of OCIMF.

Lord Justice Males stated: “The judge was clearly right to hold that the disciplinary proceedings were unfair so as to amount to a failure of natural justice. The claimant was not given proper notice of the charges against him; the findings of the panel ranged much wider than the limited and specific points with which the hearing was eventually concerned; and the direction to the panel to disregard the wide ranging and prejudicial allegations contained in the Inquiry Report was clearly inadequate for the reasons which the judge gave. Accordingly the decision was unfair and must be treated as a nullity.”

“This ruling is the end of the road for OCIMF and it is now forced to accept that it acted unlawfully and must review its processes which have been so heavily criticised now by two courts.”

In July 2017, OCIMF commenced an internal investigation into the conduct of inspector Captain Rashid and, following a disciplinary hearing, removed his accreditation of 12 years in October 2017. Left with no avenue when his appeal was refused, Captain Rashid was forced to take on the substantial resources of OCIMF in court, in order to regain his livelihood.

OCIMF operates the Ship Inspection Report (SIRE) program which was established in 1993 to address concerns about sub-standard tanker quality and ship safety standards. Captain Rashid is one of OCIMF’s most experienced inspectors, having conducted 1,103 inspections during his 12 years as an accredited inspector, never once receiving complaints about his work or practices.

OCIMF’s Compliance Manager, Captain Patrick McGroggan, pursued the investigation against Captain Rashid, in what appeared to Captain Rashid to be a personal vendetta. Initially he levelled a number of highly damaging allegations that were entirely unfounded, including that Captain Rashid had coerced vessel crew to falsify log entries, and that he provided instructions to trainee inspectors on how to submit falsified reports. All these allegations were quickly dropped by OCIMF leaving only one allegation that in four inspections, Captain Rashid misrepresented the time he had spent onboard the vessel and that the time actually spent was not sufficient to conduct a proper inspection.

Following the original disciplinary hearing, which was supposed to consider the one existing allegation, OCIMF decided that Captain Rashid had committed serious misconduct in other respects and removed his accreditation. However, it became apparent that, not only had OCIMF made no determination on the actual allegation put forward, it had also based its decision to remove his accreditation on six wholly new allegations, which had never been put to Captain Rashid, which meant that he was not afforded the opportunity to defend himself and provide answers to the allegations.

After a two year legal battle and a five day trial in the High Court, led by Partner Josh Wong of specialist commercial litigation firm, Signature Litigation, instructing Matthew Parker of 3 Verulam Buildings as Counsel, Captain Rashid was finally vindicated in the strongest of terms by the High Court, and this decision was supported by the Court of Appeal.
In a scathing judgment handed down at the Royal Courts of Justice on Friday 16 August 2019, Mr Justice Martin Spencer’s strongly worded ruling attacked OCIMF as follows:

“I have reached the firm conclusion that the process which led to the removal of Captain Rashid’s accreditation was deeply flawed, wholly unfair on him and a serious breach of the principles of fairness and natural justice …. I have no hesitation in declaring that the Defendant acted unlawfully and in breach of contract…”

Both McGroggan and the Chair of the Disciplinary Committee, Tim Ashby, were heavily criticised by the Judge. McGroggan was criticised for falsely “creating a mist of suspicion…which potentially contaminated the Committee’s consideration”, while Ashby’s handling of the hearing and his approach to decision making was discredited as “distinctly troubling” and “fairly astonishing”. The Judge also found that each of the six new allegations relied on by OCIMF were only minor errors, at the most, and could never amount to misconduct. He said, “no reasonable committee could possibly make a finding of misconduct based upon a simple error of this kind”.

“OCIMF has treated me in the most appalling way, and I hope that this Judgment will cause them to reassess their plainly deficient disciplinary procedure and begin treating its inspectors with respect. I look forward to putting this episode behind me and working constructively with OCIMF. I have always been proud to be a SIRE inspector and look forward to getting back to conducting inspections.”

“I had no choice but to challenge OCIMF because nothing is more important than the self-respect, dignity and integrity of an individual. I am thankful for the support of my family and my legal team throughout this very difficult time and grateful to the court for ensuring that justice has prevailed.”

“We are delighted for our client that the Judge has found in his favour so comprehensively. The Judgment needs to be considered carefully by OCIMF and I hope it quickly changes the way it conducts its investigations and disciplinary processes against its hard-working and professional inspectors. If it does not, there are likely to be more inspectors who will challenge OCIMF’s decisions.”

“The case will also have significance in respect to how other accreditation bodies manage their relationships with their accredited professionals and I am sure they will be looking at the ruling with interest.”