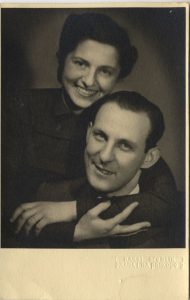 Fabrics took on a magic aura at the hands of Prague-born Zika Ascher, who built an unassailable reputation for ingenuity and versatility in printing startlingly attractive patterns on a huge range of materials. He did draw the line at adapting his design skills to paper (made from viscose) for dresses – even though he experimented to see how practical it was, and mini-dresses fabricated from paper were briefly the rage in the mid-1960s.

Ascher – the brand of Zika and his wife Lida – has been synonymous with exquisite craftsmanship and eye-catching style for more than 70 years. 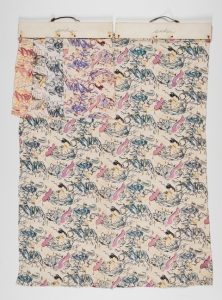 The ebullient Zika acquired the epithet The Mad Silkman from news reporters because of his ‘mad’ downhill skiing en route to competing in three world championships, from 1935 to 1938. Away from his daring on the piste, he was known internationally as the King of Colour and the Prince of Prints.

The story of this irrepressible couple is told in the newly published The Mad Silkman: Zika & Lida Ascher: Textiles and Fashion. This is one of the most handsomely produced coffee-table books of recent years, except that it will not stay long on the coffee table as it is impossible to put down, especially for anyone interested in fabrics, fashion and society and social history of the whirlwind decades of the mid-20th century up to modern times. 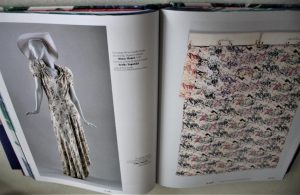 Reclining figures fabric and evening dress made from the fabric.

Zika Ascher (1910-1992) had “an extraordinary instinct for how fabric, design and colour could interact,” says the author, Konstantina Hlavácková, who is curator of the textiles and fashion collection at the Museum of Decorative Arts in Prague. Lida’s contribution to their success was essential and substantial, but to the public she often remained in his shadow.

Both born in Prague, they were twice driven to settle in London. The first time was in 1939 when they got out just in time before many brilliantly creative Jewish textile and other businesses were crushed in the Nazi annexation. Despite the tragedies of that era, they never disassociated themselves with their former homeland, although until recently little attention was paid to them in Czechoslovakia and then the Czech Republic.

The second exodus was in 1948 when after the communist coup Zika’s output was denounced in a Stalinist magazine as “hostile to the common man” and it became impossible for them to carry on business in their homeland. 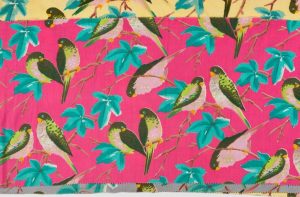 The formidable duo overcame these grave setbacks to leave an indelible mark in the fashion sphere. Zika rendered his work flawlessly to the highest aesthetic standards. He had an extraordinary instinct for how fabric, design and colour could interact to yield entrancing results.

Although not completely reckless, he had an open mind open for anything new, while respecting traditional values. He had a constant need to experiment with the technical and visual aspects of textiles. All of this was driven by his desire for classy and immaculate fabrics “that would help make the world more beautiful and life more perfect.”

The 404 sumptuous pages of this volume – which has more than 300 colour and black and white illustrations including a century’s worth of photographs – boldly stitch together the strands of the Ascher enterprise over more than 70 years. 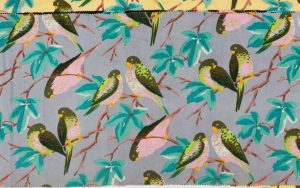 Screen-printed cotton with parrots (another section).

Every page is a feast for the eyes, featuring modes evocative of the fantasy world that fashion spun especially for post-war generations seeking novelty and exuberance. The account reaches beyond the surface individual artistic, technical, and business aspects of the Ascher phenomenon. It devotes considerable attention to the “forgotten” era before the Aschers left Czechoslovakia. The very manner of their leaving was remarkable.

Zika was born Zikmund Ascher into a family long steeped in the textile trade. In 1933 he and his older brother Josef opened their own shop selling textiles in the centre of Prague. He met Lída Tydlitátová (1913-83) when she was searching for an outfit suitable for a female skier. They married and in February 1939 left for a skiing honeymoon in Norway.

Their only son Peter told Czech radio in February 2019: “Most people don’t take 18 trunks when they go on a skiing honeymoon, but my mother did, so it was obvious that they weren’t coming back. By that time England had stopped accepting refugees, particularly Jewish refugees, but basically my mother cried her way through immigration in Newcastle and they were somehow allowed in.”  It must have helped that Zika was known to the ski fraternity in the UK through his prowess on the slopes. 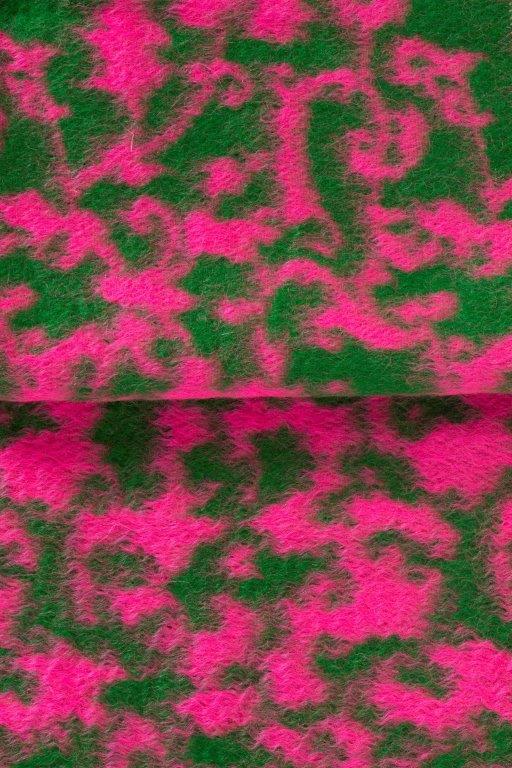 The book, compiled to accompany an exhibition at the Prague decorative arts museum for seven months until mid-September 2019, describes how they built a textile empire based in the UK which long supplied fabrics to the international fashion industry, having set up their company Ascher (London) in 1942.

Even in the UK, they needed a good deal of ingenuity to survive. With cotton and silk rationed, they had to work with what was available, and one of the most surprising materials was parachute nylon. Nylon was at the time mostly diverted to military use. After the war, to give impetus to the fashion trade, the government released quantities of parachute material, giving dressmakers another synthetic material besides rayon. Zika found that nylon fibres resisted traditional dyes and printing processes, but after much trial and error succeeded in applying bright colours and pastels. 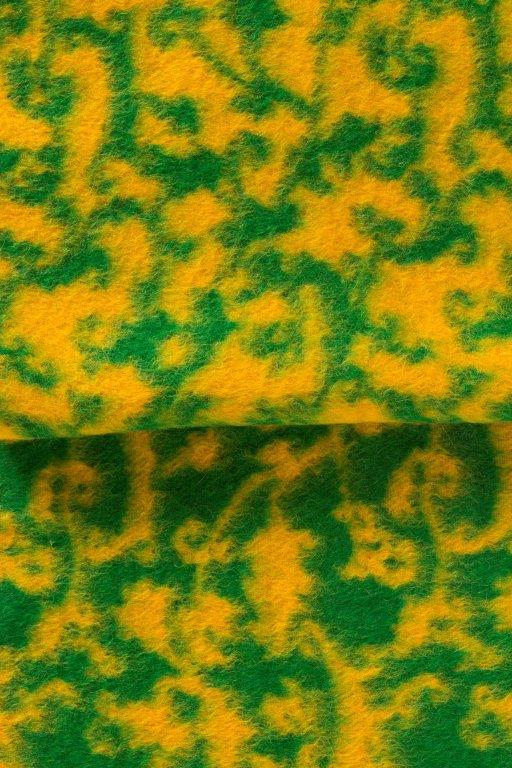 A show called Transformation of a Fabric was staged at the Dorchester Hotel in Mayfair in February 1946, when guests walked past real parachutes before entering the ballroom, which was festooned with nylon – a welcome departure from post-war dowdiness. As the show opened, ballerinas paraded in dresses made of screen-printed parachute nylon.

Another feat to beat scarcity was printing on the flimsy silk that was used to insulate electrical wiring, some of which was turned into a dress for Princess Margaret.

The couple were soon multiplying their turnover. Zika began directly approached artists such as Henri Matisse, Henry Moore, Cecil Beaton and Alexander Calder (side-stepping their agents) to produce designs for silk scarves, which became the famed collection of Ascher Squares. Later, there was a crêpe de Chine fabric design by Lucian Freud. They all put their trust in the quality of Ascher printing and colour matching. Ascher scarves have become collectors’ items (an Alexander Calder-designed scarf fetched nearly $10,000 at Christie’s New York in 2006).

Best known for his sculpture, Henry Moore moved to Hertfordshire when his London studio was damaged in the blitz. The government directed the kind of materials he needed for the military effort and Moore as a war artist went back to drawing. Zika invited him to make designs for textiles, and in 1943 Moore began filling four notebooks with drawings for dress and furnishing fabrics.

Examples of designs commissioned by Zika from 1944 to 1946 from Moore are in the V&A collection. Moore’s contributions for screen-printed rayon included Sealife which was based on marine creatures, seated figures with caterpillars, Insect wings and ovals, and piano.

The first artist contacted was Polish-born Feliks Topolski, in 1943. He had been in England 10 years. Zika immediately saw the potential in Topolski’s pencil and ink scribble-style for both textiles and squares. Although these were difficult to transfer to textiles, the artist signed a two-year contract to provide 20 designs a year and the squares were mostly printed on rayon because of a shortage of other materials. Illustrated here from adjacent pages of The Mad Silkman are the 1947 design Reclining figures, in screen-printed rayon crepe, and an evening dress, showing how a fabric is transformed into an elegant item of clothing. This reminds us that what we wear undergoes a careful process (choice of fabric and its design, design of the garment itself) before we buy it off-the-peg.

Ascher fabrics were hugely popular from the 1940s to the 1980s and frequently appeared in the top fashion magazines, including Vogue and Harper’s. Garments were proudly worn by celebrities and royalty.

In the early 1950s, Zika launched into floral motifs. Hummingbirds and parrots and bluebirds flew about his fabrics, and radishes and bees all made the catalogue.  He confounded the commentators of the fashion press who predicted these conceits would flop. Christian Dior was thrilled when Ascher designed an opulent rose-printed fabric known as Rose Pompom and showed it in his 1953 collection.

Four years later, Zika introduced hand-tufted mohair fabrics into haute couture.  This came about after Lida was treated in a clinic in the north of Scotland for tuberculosis. She started admiring Scottish tweeds, and Zika brought to bear his pre-war knowledge of working with woollen cloth to produce many shades: the Italians for instance liked bright pinks and orange. Scottish weavers were soon working overtime to meet demand.

A pattern which even today looks contemporary is shown here from the chapter Classic British Wool with a Difference. This is the 1958 mohair, wool and nylon blend known as Kerloch – this class of fabrics were often given Scottish names.

A fabric (Tropic, screen-printed silk) used by Guy Laroche shows how increasingly daring the colours and patterns were as Britain ushered in the swinging 60’s.

Lída in 1961 created her own brand promoting especially mohair, and the Lida Ascher Boutique sat in the Harvey Nichols department stores in London and Edinburgh. Simple undemanding clothes were one feature including baggy trousers for women, and sporty outfits for winter holidays. Such accessible fare and bright silks were heaven when women from London to New York, Paris to Rome were fed up with the navy, brown or grey worsteds of the early post-war years. The first to use Ascher Mohair was Antonio del Castillo for the French fashion house Lanvin-Castillo’s Autumn-Winter collection. 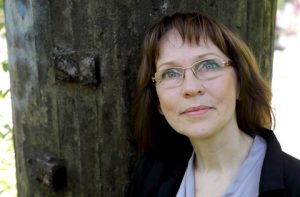 In the early 1970s the Aschers spearheaded the ‘new’ cheesecloth for women’s smock shirts and men’s shirts, selling 450,000 yards of this cotton muslin before rivals could catch up. Harrods, Liberty and Debenhams sold roll after roll of pieces of Ascher fabrics.

Peter Ascher contributed his childhood memories to The Mad Silkman, offering an intriguing account of the Wigmore Street showrooms and offices, in front of which, in the era before traffic wardens, rich clients would sashay out of their Rolls Royces and Bentleys.

He says that Zika relied heavily on his gut instincts, his massive self-belief, his large bank overdrafts (he went bankrupt at one stage), and the collection of unpaid accounts on Friday afternoons to ensure the weekly payroll was met.

He writes: “Zika and Lida were well aware of the financial risks they were taking in trying to stay ahead of fashion for over 40 years through constant and often prohibitively expensive experimentation.

“If Zika had followed established business practices, it is highly unlikely that most of his ideas would ever have got off the ground.”

Author Konstantina. Hlaváckova.
The Mad Silkman: Zika & Lida Ascher: Textiles and Fashion, by Konstantina Hlavácková, with the support of Peter Ascher, is published by Slovart, ISBN 978 8 07529 748 8.