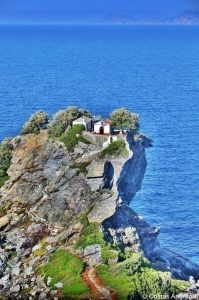 The Aegean island of Skopelos is a dream destination, one the one hand for fans of the supergroup Abba and on the other… for lovers of the quieter Greek holiday spots.

From May to September each year, tourists drive or are bussed to view the locations of the 2008 romantic comedy Mamma Mia! recalling the songs I have a Dream and many other hits.

The Abba connection is among the attractions of the Greek island enthusiastically promoted at the huge trade fair World Travel Market in London, and at the 2019 event the island was represented, by Ioanna Efstathiou, president of the tourism committee of Skopelos municipality, and Anna Maria Kantartzi. 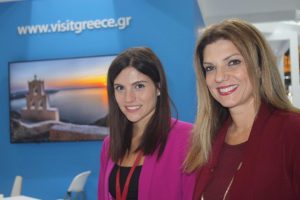 Ms Efstathiou is managing director of the company Dolphin of Skopelos, which provides services for holidaymakers including tours of the island like the Abba trail.

Dolphin, established in 1996, describes itself as the biggest Incoming travel agency on the island, offering services to individual customers and hosting more than 30 big tour operators. 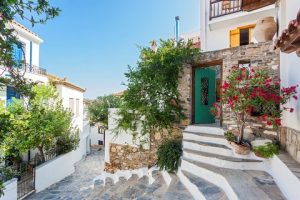 The film was a highly popular, if not a critical, success and is reported to have grossed $615m worldwide on a $52m budget.

The plot tells of a bride-to-be named Sophie (Amanda Seyfried) who without telling her mother invites three men to her forthcoming wedding, each of whom might be her father according to her mother’s diary of past romances.

Skopelos is the middle of the three Northern Sporades islands, a short ferry journey from the nearest airport on Skiathos. A mere 21 km long and at its widest, 8 km across, Skopelos is known to Greeks as the island of green on blue because of the dense pine forests that in places descend to the water. Some of its 108 km of beaches are only accessible by boat. Holidaymakers from the mainland love its largely unspoiled nature and the two main towns: the capital Skopelos (the starting point for the Mamma Mia! tour) in the south, and Glossa in the north.

Abba themes are pervasive, as are establishments and coaches piping the soundtrack to the film, all 16 songs of it. Most tours begin with a drive along the west coast, crossing to the magnificent site of Agios Ioannis Kastri church, known as the Mamma Mia wedding chapel, perched on an outcrop. Its name means Saint John on the Castle, which might indicate that there was a small castle there to protect the island from pirates and invaders. 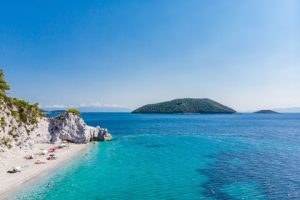 The church has beautiful icons and other ecclesiastical artefacts to admire. Its impressive rock is accessed by a narrow path, and below, a small beach is packed in summer.

In the film, Sophie has her heart set on marrying there. Interior scenes were shot at Agion Panton, a tiny church in front of Panagitsa tou Pirgou at the edge of Skopelos harbour. The small hill in front of the chapel was used for the scene in which Meryl Streep and Pierce Brosnan perform the Abba hit The Winner Takes It All.

The real chapel is unlike its representation in the film, as the crew built a mock-up chapel around it. The fittest fans walk up the 199 steps to see an expansive view of the coasts of Skopelos and to Alonissos, another island in the Sporades group… and to enjoy a cooling sea breeze.

The church is 7 km east of Glossa which has cobbled streets adorned with colourful flowers, and from a hill 250 m high offers fresh stunning sea views. across to Skiathos, Evia and the Pelion peninsula, and spectacular sunsets.

Tourists are taken to an olive press near Glossa to hear about Skopelos virgin olive oil: the island has more than 200,000 olive trees, thanks to Minoan settlers from Crete who brought with them such trees and the vine long ago. Virgin olive oil is one of the most important products of the island. 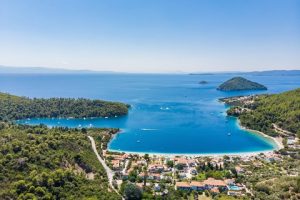 Pine forests reach to the sea.

Near the beach of Loutraki, the port of Glossa, is the Byzantine temple of Agios Nikolaos, which looks out to sea and is considered a protector of seafarers. The church was founded on a 7th century. Byzantine temple.

Next, on to the short Kastani beach, which amid lush surroundings is one of the best on the island and where Mamma Mia filming took place for 10 days. This beach, from where it is safe to swim, was the setting for the scene beside a tree-topped rock when Amanda Seyfried and Dominic Cooper (as Sophie and her fiancé) sing Lay All Your Love On Me. Add to this Does Your Mother Know and I Have a Dream, and you have an Abba dream scenario. The wooden pier and the bar seen in the movie are gone but have been replaced by more sturdy facilities.

Guides tell how the small peninsula near the beach at Glisteri provided backgrounds during the movie and that it is where was sung Dancing Queen.

Then comes the opportunity for the customers for more swimming, or dining in a taverna, at the bay of Agnontas where the boat in the number Money Money Money was moored.

A long-awaited sequel Mamma Mia! Here We Go Again! was released in cinemas in July 2018, but for that all filming was in Croatia, on the island of Vis, even though it is set on a fictitious Greek island. 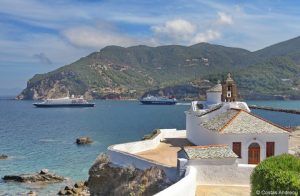 Authenticity sleuths studying the original movie might like to take a walk in the City of London. The scene where Brosnan’s character, Sam, rushes from down the escalators from his New York office to set off for the Greek Island was filmed at the Lloyd’s building in Lime Street.

Skopelos is fortunate that the distance from industry and major marine traffic has kept the seas surrounding it among the cleanest and clearest in Greece. There are both sandy beaches as at Kastani and pebble strands such as at Panormos (Glossa) A renovated network of kalderimi, stone-laid footpaths, is opening forests, mountains and valleys to hikers.

Skopelos Town is built in amphitheatrical shape, full of white houses with tiled roofs. That overhang meandering lanes with traditional, bougainvillea-decked wooden balconies. One of these houses is the former residence of Pavlos Nirvanas, the most renowned poet of Skopelos.

The capital is the successor to the first settlement Peparithos, according to myth built by Staphylos, one of the four sons of the god Dionysos and Ariadne. Whatever the reality, Peparithos grew to be an important naval power.

The Spartans, victors in the Peloponnesian war, replaced the democratic system of the island with an oligarchy. During Roman times, trade got back on track and in the 2nd century AD, Ptolemy was the first to refer to Peparithos as Skopelos, possibly in reference to the many reefs around the island.

After 1276, with the decline of the Byzantine fleet, the island became a refuge for pirates, who obliged local people to join them in brigandage and thus develop seafaring and shipbuilding skills. Shipbuilding survived until the mid-20th century era of steam power, thanks to abundant raw material from the pine forests.

The ruthless Lesbos-born pirate Barbarossa attacked the island and slaughtered men and women, forcing survivors to flee to Evia and the Greek mainland; and the island came under Ottoman domination until the Greek Revolution of 1821.

Unsurprisingly, Skopelos cannot accommodate an airport, so most visitors in summer arrive via Skiathos airport and take a ferry to Skopelos Town or Loutraki, the port of Glossa. Car ferries run on island routes throughout the year.

It takes a little patience to get there, but it is well worth the time spent… when all is said and done…