Islands upon islands: Greece’s secluded Lipsi hops into the eco-limelight 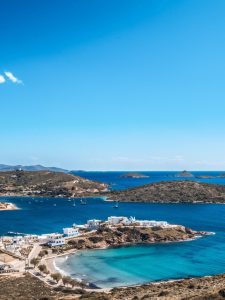 Islands upon islands: Greece’s secluded Lipsi hops into the eco-limelight

Ideal vacations for many thousands of people mean Greek islands, and a single name, Lipsi in the south-eastern Aegean, signifies a wealth of them.

Lipsi is the collective name for 25 tiny and six rocky islets (described in one promotion as “a glittering necklace”) in the Dodecanese. No wonder that “island hopping” is a prime pastime for holidaymakers eager to take to the water. Equally appealing for those seeking a vacation away from mass tourism is distance from big city life: 173 nautical miles (321 km) from the Greek capital, for example.

With just under 800 inhabitants, the main island which gives its name to the archipelago nestles between Patmos (10.2 nm east) and Leros (8 miles north) which has the nearest airport. 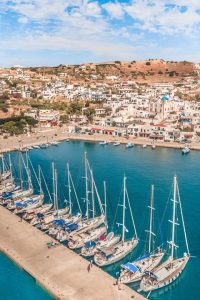 Unlike today’s holidaymakers, it is mooted that one visitor remained on the island for a whole seven years – not because of its charms, but involuntarily through the intrigue of a scheming inhabitant. Or so the myth goes.

For Lipsi is one of the possible identities of the legendary Ogygia, an island where dwelt the nymph Kalypso or Calypso, one of the daughters of Atlas the Titan who was condemned to carry the sky on his shoulders. This could be because the -ps- in the name Kalypso is echoed in the name Lipsi.

In Homer’s Odyssey, Book V, Kalypso prevented the shipwrecked Odysseus for seven years from returning to his home of Ithaca, yearning to marry him. When Zeus learned of this affront, he sent his messenger Hermes to Ogygia to order Kalypso to set Odysseus free. She eventually relented, told Odysseus to build a small raft, gave him food and wine, and bade him farewell. Kalypso “lives on” in Lipsi: at night she weaves on her golden loom, near Kousselio, the possible site of an ancient temple.

In the 21st century, Lipsi has no wiles other than word of mouth of its beauty, and promotional campaigns, to lure the traveller.

Consonant with its modest geographical size, Lipsi was one of the Aegean isles with its own small stand, manned by Makis Bitzios of Athens-based Re-make agency, at the 2019 World Travel Market in London.

The island’s mission is to maintain its reputation as one of the most out-of-the-way and unexplored destinations of the Aegean Sea, while maintaining a varied visitor profile.  Interestingly, many of its guests are Italians – coincidentally, Italy ruled the island for 30 years in the first half of the 20th century – and Makis Bitzios is gently extending his publicity campaign for the island to new markets in Europe. 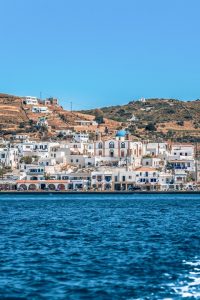 He said that “along with its divine beauty,” Lipsi is known for its ecological and ‘green’ initiatives at national level. Earlier in 2019, the municipality announced plans to do away with single-use plastic water cups and straws and replace them with eco-friendly alternatives. The mayor Fotis Maggos met owners of restaurants and bars, who agreed to replace all plastic cups and straws with alternatives made of recycled paper or bamboo. Lipsi’s decision is in line with the European Union directive, ordering member states to ban single-use plastic products by 2021.

The island plans to become the world’s first permanent sanctuary for dolphins rescued from captivity, under an initiative from the Archipelagos Institute of Marine Conservation and the Lipsi municipality.

Mostly, people go to Lipsi to unwind, relaxing on or swimming in crystal-clear waters from quiet beaches some of which have naturist sectors. Beaches are either sandy like Katsadia (south-facing where many yachts anchor) or dazzlingly pebbly like Hohlakoura,.

Some of the beaches are accessible on foot by hiking paths from Hora Lipsi, the main town, and some by bus. Swimmers especially head for Kambos, Elena, Katsadia, and Hohlakoura.

Scheduled and private charter boats head for the minor islands, courtesy of companies including Renas Boat, which has been operating since 1986. On the trips, there are stop-off points for swimming and for diving to admire the seabed.

Hikers find that despite stony terrain it is easy to walk along the many old footpaths past gullies, small lush valleys. vineyards, olive trees, fig trees, pear trees, lemon trees and a big variety of other cultivated fruit and veg. Itineraries lead to tiny chapels, small settlements, more (!) beaches and hilltops smelling of oregano, thyme and other herbs to reach breath-taking panoramas of the sea. Walking is best in autumn and spring when the weather is comfortable.

A favourite for hikers is a paved footpath past the holy church of Kimisi tis Theotokou – Assumption of the Holy Mother of God – to the temple of Ano Kimisi. 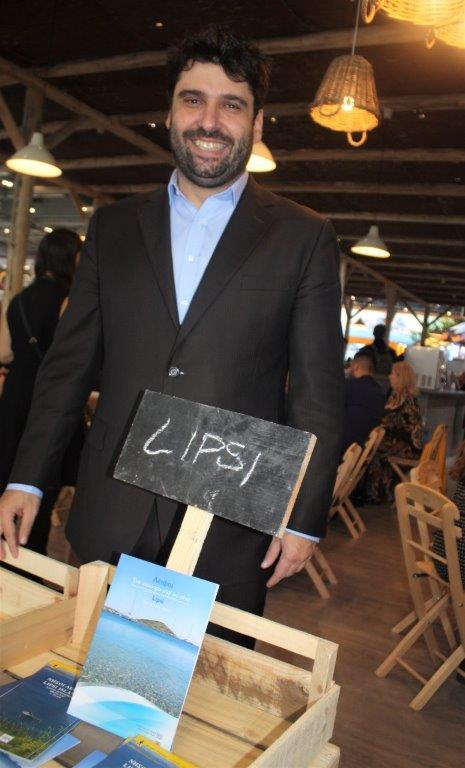 Clustered on a small hill, the Hora imitates the shape of an amphitheatre and its naturally sheltered harbour sees many boats come and go. For yet another great view, one can climb to the highest point of the Hora, the Aravis windmill.

The church of Panagia tou Harou which founded in 1600 by monks from Mount Athos, was fortified to ward off pirates and hence is considered the protector of the island. The church has an icon of the Virgin holding Jesus crucified, and this is reputed to have miraculous powers. Every year August 22 is devoted to the procession of the icon, and the 24-hour feast starts with Vespers on the beaches and on the two big squares.

The church of Kimissis tis Theotokou (Dormition of Mary), dominating the bay bearing the same name. has reliquaries containing the remains of monks martyred during Ottoman rule. Five of those monks have been canonised by decree of the Ecumenical Patriarch of Constantinople. The church is connected by a 900 m path to another, Kato Panagia.

Next to this church is the Nikiforio ecclesiastical, historical and folklore museum, where the collection includes vessels dating back to the Mycenean era (1600-1100 BC) and the Geometric era (1100-800 BC). There is a carved marble corner acroterion (architectural ornament) of an altar, produced by a 5th century BC Milesian workshop; and much more including Hellenistic lamps and other grave objects and stele, amphoras, a large piece from a Byzantine carved templon (altar barrier); and dedications found on the island’s fortified acropolis, including an important 2nd century BC inscription about the sanctuary of Apollo Lepsios. 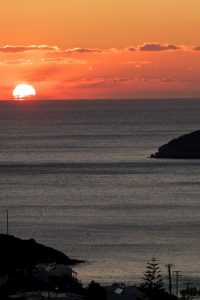 At Kouselio is the church of Panagia (the Virgin), built on the foundations of an early Christian three-aisled basilica. An ancient marble inscription is incorporated into the walls.

The island has been inhabited since prehistoric times. Its ancient name was Lepsia, as mentioned by Pliny. According to tradition, the founder of Lipsi was Lios, a Cretan who settled with his family in a cave above Liendou beach and later built his house on the point where today is the main square.

Carians who came from the coastal regions of Asia Minor were followed by Dorians around 1200 BC and then Ionians from Miletus. The political relationship of Lipsi with Miletus era has left its remnants: the whole area of ​​Agios Nikolaos has prehistoric pottery fragments up to the early Christian period. Besides the official worship of Apollo Leipsieos, there was when the islands were part of the state of Miletus a cult of Dionysus and Apollo Didyma.

The acropolis was succeeded much later by the castle. During the Archaic period (7th-6th century BC) the island flourished in its intellectual, artistic and cultural status, supported by agriculture, fisheries, animal husbandry, crafts and the arts. This continued into the Classical period (5th-4th century BC).

During the Peloponnesian War (431-404 BC) ships from the warring factions took refuge in the sheltered coves.

In the Byzantine period (7th-14th century AD) Lipsi was part of the thema (administrative division) of Kivyraioton (together with Kos, Tilos, Nisyros, Patmos, Kalymnos and Leros), but as the Byzantine empire lost its grip, the region was over-run by pirates, and Lipsi’s population fled.

People of Lipsi had an active part in the Greek national uprising of 1821. Here were hosted the exiled Patriarch Theophilus of Alexandria Papakostas and admirals Miaoulis Andreas and George Sachtouris who took part in the battle of Gerontas (1824) fought near Leros when a Greek fleet of 75 ships defeated a 100-strong Ottoman armada. Gerontas was one of the most decisive naval engagements of the Greek War of Independence and secured the island of Samos.

Italian rule began in 1912 during the first Balkan war with the installation of a small garrison and the territory was renamed Lisso. The island was reintegrated in the Greek nation along with the rest of the Dodecanese on March 7, 1948.

Viticulture yields among other varieties the sweet red wine known as Fokiano. During Italian dominion of the island quantities were shipped to the Vatican for use in the Holy Communion.

Greek food! Lipsi has its variations on the main themes. Resisting the influx of “tourist cuisine” the inhabitants of Lipsi use their local produce for traditional recipes, and the sea provides crayfish, prawns, crabs, oysters, octopus and more.

Home cooked specialities are stuffed mountain goat, courgette flowers with rice, pitaroudia (chickpea fritters) and yiaprakia (stuffed cabbage rolls). To go with this is bread from wood ovens; and to follow are offered patsavouropita (milk phyllo pie) and xerotigana (pastries with honey and nuts).

Access to Lipsi sometimes requires a nine-hour ferry voyage from Piraeus. Otherwise there are daily connections with ships and catamarans of Rhodes-based Dodekanisos Seaways, a company founded in 1999 by George and Yiannis Spanos.