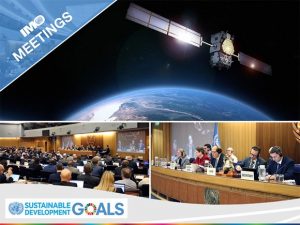 IMO’s Sub-Committee on Navigation, Communications and Search and Rescue (NCSR 7, 15-24 January) will continue its ongoing work to review the GMDSS requirements.

Search and rescue at sea depends on the integrated satellite and terrestrial radiocommunication communications system known as the Global Maritime Distress and Safety System (GMDSS). The GMDSS is mandatory under the regulations in chapter IV of the International convention for the Safety of Life at Sea (SOLAS). IMO’s Sub-Committee on Navigation, Communications and Search and Rescue (NCSR 7, 15-24 January) will continue its ongoing work to review the GMDSS requirements, with the aim of enabling the use of modern communication systems in the GMDSS, while removing requirements to carry obsolete systems. The aim is to finalize the work in 2021, for submission to the Maritime Safety Committee (MSC), so that the revisions can be adopted for entry into force in 2024.

The Sub-Committee is also expected to complete its update of the International SafetyNET Services Manual.  SafetyNET is an integral part of the GMDSS, providing an international automatic direct-printing satellite-based service for the promulgation of maritime safety information (MSI), navigational and meteorological warnings, meteorological forecasts, search and rescue (SAR) information and other urgent safety-related messages to ships.

On other matters, work on developing safety measures for non-SOLAS ships operating in polar waters will continue. While the IMO Polar Code is mandatory under SOLAS, this generally excludes fishing vessels, pleasure yachts, smaller ships under 500 gross tons and vessels on domestic voyages.  The session will look into applying Polar Code chapters 9 (Safety of navigation) and 11 (Voyage planning) of the Polar Code to non-SOLAS ships. The IMO Assembly in 2019 adopted a resolution urging Member States to implement, on a voluntary basis, the safety measures of the Polar Code, as far as practicable, for non-SOLAS ships operating in the Arctic and Antarctic, including fishing vessels of 24 metres in length and above and pleasure yachts of 300 gross tonnage and above not engaged in trade.

Recognition of navigation systems is also on the agenda. The Sub-Committee will receive information on the Indian Regional Navigation Satellite System (IRNSS), with a view to considering its recognition as a future component of the world-wide radio navigation system. Information will also be received on the Quasi-Zenith Satellite System (QZSS) (Japan) for development of performance standards for QZSS equipment, with a view to its future recognition.

Amongst other regular agenda items, the Sub-Committee is expected to revise the Guidelines for Vessel Traffic Services to update the version adopted in 1997 (resolution A.857(20)). The session will also review proposed amended ships’ routeing measures, discuss matters relating to the functioning and operation of the Long-Range Identification and Tracking (LRIT) and prepare liaison statements to the International Telecommunications Union.

IMO Secretary-General Kitack Lim opened the session, which is being chaired by Mr. Ringo Lakeman (Netherlands).