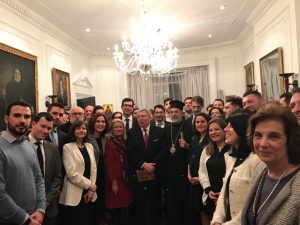 Members of the Associations and Charities with His Eminence Archbishop Nikitas, Prof John Chrysoulakis and the Greek Ambassador Dimitrios Caramitsos – Tziras

The Hellenic Bankers Association – UK (HBA-UK) hosted a gathering with the Secretary General for Greeks Abroad of the Ministry of Foreign Affairs, Prof. John Chrysoulakis and representatives of all active Hellenic Associations and Charities  in London.

London, ‪3 February 2020 – The Hellenic Bankers Association – UK (HBA-UK) hosted a gathering with the Secretary General for Greeks Abroad of the Ministry of Foreign Affairs, Prof. John Chrysoulakis and representatives of all active Hellenic Associations and Charities in London on Sunday the 2nd of February. 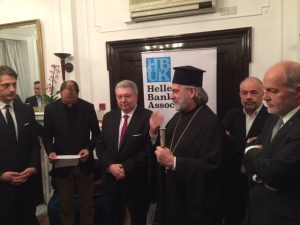 The event took place at the Archdiocese under the auspices of His Eminence Archbishop Nikitas of Thyateira and Great Britain and in the presence of H.E Dimitrios Caramitsos-Tziras – Greek Ambassador in the UK, Athanasios Rizos  – Head of the Consular Office in the Greek Embassy in the UK, Gerasimos Lazaridis  – the Commercial and Economic Attaché of the Greek Embassy in the UK , the Defense  Attaché Captain (HN) Athanasios Dimitriou and Costas Dafos – Commercial Attaché at the Cyprus High Commission. 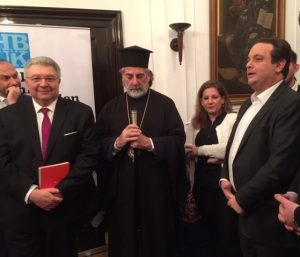 The purpose of the event was to exchange views on ways that the various Hellenic Associations and Charities could strengthen their cooperation and work closely with the Church and the State to better serve the Greek community in the United Kingdom.

Twenty-eight associations and charities attended and the presentation of each one of them was broadcasted live via HBA-UK’s page on Facebook; a very thoughtful idea so all can see and hear what developed there.

The Associations and Charities attended on this occasion were the following: 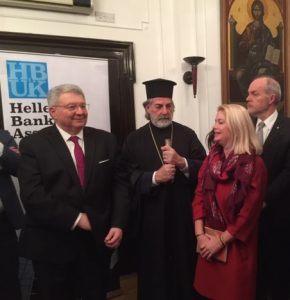 A buffet drinks and dips reception with home made greek meze  followed  – thanks to the volunteering of some Greek ladies, with intense networking and we hope this will be the begining of furthering the Hellenic presence as well creating synergies for business.

We look forward to the next call and meetings; we were pleased we had enough time to pressent** with Anny Zade-Lazaridis the importance of the HESGB and what same offers not only to the  Greeks but to the International community in Shipping and beyond. An example of HESGB success is the forthcoming event, it’s 25th Annual Dinner & Dance on the 29th of February 2020 at the Grosvenor House; see respective banner in the www.allaboutshipping.co.uk site. 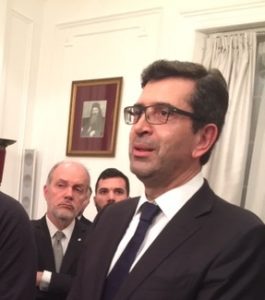 Moreover we were more than pleased to listen to the sort but to the point statements from some associations and charities mentioned above to whom we belong and or attend their events all this decades in the United Kingdom.

Well done and many congratulations to Louis Loizou and his colleuages in setting up a very impotant and timely event given the current circumstances in Greece, as well as in the United Kingdom and in general all over Planet Ocean. For many was also a good chance to meet the new Archbishop and other members of the diplomatic corps,  both Greek and Greek Cypriot. 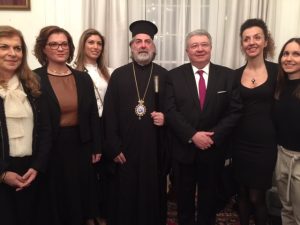 Archbishop Nikitas with Prof. Chrysoulakis and the greek ladies who offered the home made meze