Biographer Celia Lee who wrote ‘HRH The Duke of Kent: A Life of Service’ says his dedication underlines vital role of the monarchy 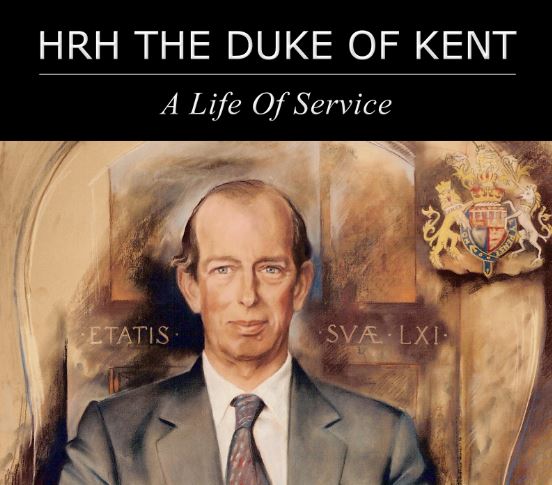 A unique biography. (detail of cover)

Biographer Celia Lee who wrote ‘HRH The Duke of Kent: A Life of Service’ says his dedication underlines vital role of the monarchy

His Royal Highness Prince Edward The Duke of Kent KG GCMG GCVO ADC(P), first cousin to the Queen, is indefatigable. Since his teenage years in the early 1950s he has been devoted to a formidable number of commitments in his public life while keeping, beyond those, a low profile.

The Duke has with innate dignity carried out a range of duties in support of Her Majesty, representing her on many occasions at home and overseas, and has been closely involved with more than 120 charities and social organisations.

His active backing for important causes has fortified the belief of his biographer, Celia Lee, in the indispensability of the monarchy. 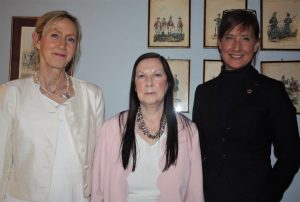 “As you will know there has been a movement away from recognition of royal titles in recent years, and I believe that in the light of my research that this is a mistake,” Mrs Lee insisted at an event to relaunch her book HRH The Duke of Kent: A Life of Service, co-authored with John Lee, who contributed a chapter on the Duke’s distinguished military career and the Commonwealth War Graves Commission, of which he is president.

“We don’t need fewer royals, we need more,” she declared. Before publication of the book, she said, not one jot had been written in the press “about this amazing man who has been doing all this charity work for all these years.”

Advancing years have not stilled his tireless support for 73 charities and many cultural and music organisations, Mrs Lee told a packed gathering at the Polish Hearth Club in Kensington. The charities “of which he is a completely hands-on patron or president, visiting all of them,” are central to the biography. Among them are health organisations – in addition to which he is an Honorary Fellow of the Royal College of Surgeons and the Royal Society of Medicine. “You may be surprised to hear that he has been present at theatre surgery and has also been given instruction in keyhole surgery,” said the author. 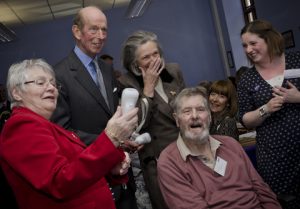 “He works full-time every week, with only one month’s holiday in August.”

The Duke – he prefers to be called Prince Edward – was seventh in line to the throne when he was born in 1935. When he was not yet seven years old, he became sixth in line when his father Prince George Duke of Kent aged 39 was killed in a plane crash on active service.

The tragedy left the Duchess, Athens-born Princess Marina of Greece and Denmark, a war widow, at which time she was commandant of the Women’s Royal Naval Service (the WRNS), and meant that their three children were fatherless.

Mrs Lee said that Princess Marina (who died in August 1968) made a splendid job of bringing up her children. “Prince Edward told me in an interview: ‘My mother’s motto was always that honour, dedication to duty, discipline and good manners were of the utmost importance in life.’” 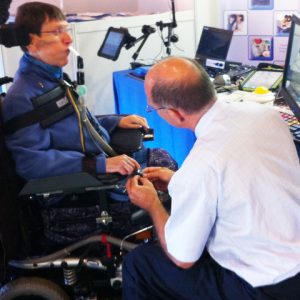 The family has close links with Poland: the first Duke and Duchess visited the country in 1937 and were friendly with members of the its aristocracy.

Even before his 21 years as a regular soldier in the British Army, Prince Edward was introduced to a life of service by his mother, during an extensive tour of the Far East (in which she carried out 69 engagements) at the time of his 17th birthday.

Stressing the need in her view of to sustain the royal family, Mrs Lee said that since the 1960s the number of new charities registered in the UK had increased at an average of 2,500 yearly, to reach 195,289 employing more than 1 million staff. “The importance of a charity is increased if it states on their headed notepaper and on their website that their patron is His or Her Royal Highness.

“It also ensures that the charity is legitimate, in the light of some charities appointing cold-calling agencies to pester elderly people for money.” 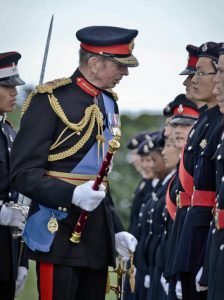 Inspection at the Duke of York’s Royal Military School.

Mrs Lee said that in writing her book she worked with more than 200 people employed in charities of which Prince Edward was patron or president. “That he held the title His Royal Highness did matter to them and his presence was considered a great honour.”

She said that the royal family has shrunk in total over the years, so there was no need to reduce the numbers of HRHs and titles. From the direct royal line at present there were just two adult princes, William and Harry. William and Catherine had three children, but it would be some 20 years, after those offspring went through university, before they could undertake significant charity work. The logic of this was that the present members of the royal family, including the extended family, needed to retain the title of His or Her Royal Highness in order to continue support for the ever-growing numbers of charities.

Mrs Lee outlined some of Prince Edward’s endeavours, which includes being president of the Royal National Lifeboat Institution. The charity, which runs volunteer lifeboat crews and carries out flood rescue and educational work, has had strong bonds with the royal family for almost 200 years and is the subject of a chapter in her book. 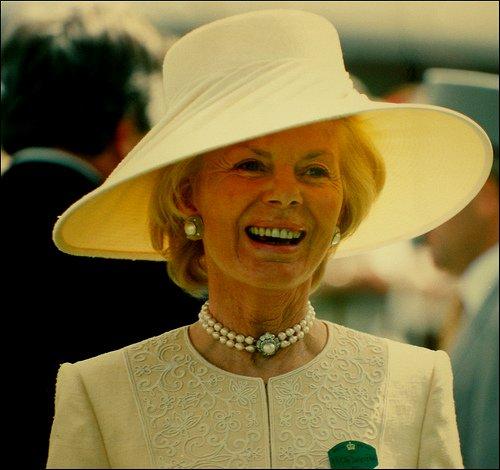 HRH The Duchess of Kent.

In relation to the business sector, he was for more than 20 years vice-chairman of the British Overseas Trade Board, now known as UK Trade and Investment. He is involved with the Institute of Export, the British Computer Society, the Royal Academy of Engineering and the Chartered Institute for Information Technology. It was not widely known that he was the first member of the royal family to visit China to promote British trade when in 1979 he attended the British Energy Exhibition in Beijing.

He is involved with music charities including Trinity Laban Conservatoire of Music and Dance and is president of the London Philharmonic Orchestra and the Royal Choral Society. On January 27, 2020, he presented to the baritone Theo Perry the prestigious Trinity Laban Gold Medal award following a performance at Southbank Centre’s Purcell Room.

Trinity Laban’s young musicians perform regularly at the Polish Hearth Club of which he is patron too. In 2002 he led representatives of Trinity College as it was then known in a procession down the Thames from Westminster Abbey to Greenwich, marking Trinity’s move to its new home at the Royal Naval College. 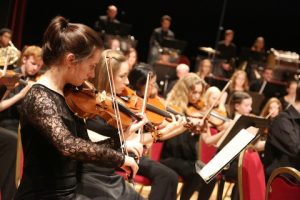 The royal couple are keen supporters of Trinity Laban College of Music and Dance.

In September 2010 representatives of Poland and other distinguished guests were welcomed to the college for an event celebrating the bicentenary of the birth of Frédéric Chopin. A bronze bust of the composer was generously gifted to the conservatoire by the Polish ministry of culture and was transported from Westminster Pier to Greenwich on the aptly named sailing ship Frédéric Chopin. The highlight of that evening was the unveiling of the sculpture by Prince Edward. A duplicate bronze bust of Chopin is on display in the members’ room at the Polish Hearth Club.

Among other music interests, he is a regular attendee at recitals at London’s Wigmore Hall, where he is patron. His wife, Katharine, Duchess of Kent née Worsley, whom he married in 1961 at York Minster, is a fine pianist. She taught music at a primary school in Hull, and alongside her husband has encouraged organisations supporting young musicians. Her charity is Making Music. 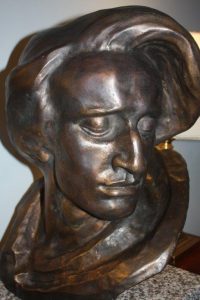 Chopin: admired by the Duke and Duchess, and the Polish Hearth Club’s adored musical genius.

He is president of the All England Lawn Tennis and Croquet Club, presenting the trophies to the Wimbledon champion and runner-up, and president of the Scout Association, the Royal United Services Institute, and the Royal Institution of Great Britain.

In a message to the gathering, Prince Edward said: “I send my very best wishes for the re-launch of your book at The Polish Hearth Club this evening, and I am sorry not to be able to join you and your guests. I do hope you have a successful and enjoyable evening.”

His son, George, Earl of St Andrews, also sent a message to Mrs Lee: “On the occasion of the relaunch of your book about my father and his charitable work, I wanted to take the opportunity to express my admiration for your achievement in producing a book that will be a lasting record of my father’s life of service, and to offer my congratulations and my appreciation.”

Introducing Mrs Lee, Ania Mochlinska, a director of the Polish Hearth Club, spoke of her extensive authorship and book editing including The Churchills: A family Portrait, Women in War and Jean Lady Hamilton: A soldier’s wife. Mrs Lee is joint chair of the Women in War group which is part of the British Commission for Military History.  The club’s association with the Duke of Kent was very strong for his father was present at its inauguration in 1940, and Princess Marina took over as patron when he lost his life. 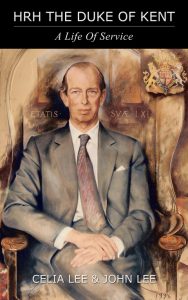 A brilliant presentation of HRH The Duke of Kent who I have met on several occasions, and who works so hard for his many charities.
Congratulations on this superb article.

Many thanks to James Brewer for a splendid journalist piece and for attending the book launch for HRH THE DUKE OF KENT A Life Of Service that was put on to raise money for charity.