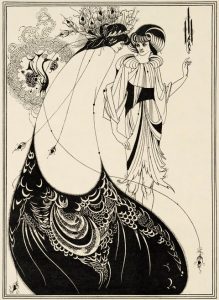 For his era, he was an artist apart as he pursued his fervent exploration of presenting memorably the mythological and medieval tales he was commissioned to illustrate, and the racy depictions sought for under-the-counter sale by a salacious London publisher.

To this day, Beardsley’s lucid, linear style has echoes in commercial and pop art. It played a leading part in the development of Art Nouveau and the explosion in the 1960s of the psychedelic trends in illustration – the best-known result was album covers for the Beatles and other recording stars including Procol Harum.

Tate Britain has opened a huge survey of Beardsley’s distinctive black-and- white output, telling the story of how he developed his impassioned oeuvre when so young and in such a short span. You might have heard of or seen isolated examples of his work, but this collection is a real eye-opener. Beardsley knew how to draw characters of delicate beauty – and of flamboyant sensuality, some of them wielding giant protruding phalluses.

Beardsley died of tuberculosis—which he had contracted at the age of seven – In 1898 at just 25, but had already revolutionised the art of illustration, in several instances appalling staid society. Although he passed away tragically young – he identified with John Keats who died in 1821 at the same age, and of tuberculosis – Beardsley’s strange, sinuous images have retained their allure and will gain many new admirers thanks to this skilfully presented airing.

He was the enfant terrible of 1890s London, said Tate Britain director Alex Farquharson, referring to the scandalous series of illustrations and much other work that have left a tangible imprint on our culture. The exhibition focuses on his exquisite draughtsmanship, said the Tate director. 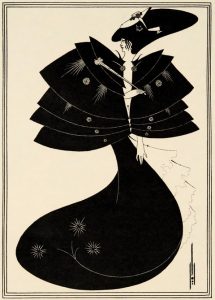 Tate curator Caroline Corbeau-Parsons said that from more than his 1,000 drawings she and her colleagues were presenting 200 works from Beardsley and others.: “We are trying to focus on his most beautiful, original drawings.” She added: “Beardsley had an innate capacity to focus on all sorts of styles. He was very much a man of that time.”

It is the first exhibition dedicated to Beardsley at Tate since 1923, and the largest display of his original drawings in Europe since the 1966 exhibition at the Victoria and Albert Museum which set off a Beardsley revival.

At the age of 18, he had already found his artistic voice, realised in his attention to one of the great Greek legends. We see an ink, wash and gouache illustration of Perseus, echoing but not imitating the Story of Perseus which was executed over a long period, 1875-88, by his idol Sir Edward Burne-Jones (1833–1898) whose elongated characters must have impressed Beardsley.

The Burne-Jones series was in in gouache, gold paint and ink and relates the rescue by Perseus, son of the god Zeus, of the beautiful Andromeda and his slaying of the Gorgon sister Medusa, whose gaze turned all who looked on her to stone. When the Gorgons attempt to punish Perseus for killing their sister, he dons the helmet of invisibility given to him by the sea nymphs. 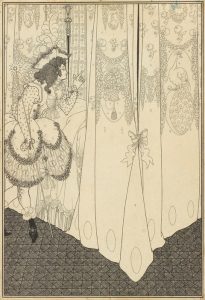 Perseus is drawn in 1891 after he has decapitated poor Medusa, whose locks of hair had been turned to snakes by Athena, the goddess associated with wisdom, justice and warfare. From the blood that spurted from Medusa’s neck sprang her two sons by Poseidon, the vengeful god of the sea, storms and more. Here Perseus stands naked holding the severed head of Medusa, and a panel at the top has an image of the three sisters, Beardsley intensified the image further by inscribing the word Perseus on a ribbon surrounded by snakes.

Three years later, Beardsley could be found in the British Museum studying ancient Greek vases including the output of the “unrestrained” Athenian artist Douris, a painter of ceramic vessels in the early 400s BC. Douris’s boldly delineated figures on red-painted vases, both mythological and derived from everyday life, obviously enriched the worldview of Beardsley.

Beardsley never “played it safe,” and a strong streak of the playful was often to the fore.  Witness his treatment of another Greek theme, the Lacedaemonian Ambassadors, of 1896. This series in pen and ink drawing over pencil and paper was one of the occasions on which he championed independent, courageous women.

Lacedaemonian Ambassadors was part of a privately printed edition based on the bawdy satirical comedy Lysistrata by Aristophanes and allowed the London artist to produce one of his most risqué and mischievous sets. Aware of the tradition in ancient Greek drama of comedy actors wearing enormous stage-prop phalluses, he seized on the motif in several of his illustrations.

This is the famous “sex strike” story. In 411 BC, the 20th year of the Peloponnesian War between the city states of Athens and Sparta (known as Lacedaemon) an Athenian wife named Lysistrata summons the women of Greece to the Acropolis to urge them to refuse relations with their husbands until they agree a peace treaty.

Beardsley completed the Lacedaemonian Ambassadors in the wake of his drawings for Oscar Wilde’s Salomé, published in 1894, which brought him early notoriety. The Climax, in which Herod’s daughter Salomé kisses the severed head of John the Baptist, remains his most famous work. Although the play could not be staged in England it was published in book form for limited circulation, and illustrations include The Peacock Skirt and The Black Cape. Salomé eventually premiered in Paris in 1896. (The remarkable 1923 film adaptation of Salomé by husband and wife actors Charles Bryant and Alla Nazimova is screened in a darkened gallery, the costume and set designs inspired by Beardsley’s drawings. The film was undeservedly a financial flop). 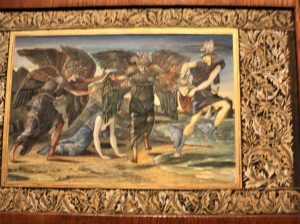 Perseus pursued by the Gorgons (detail). By Sir Edward Burne-Jones.

Further scandal ensued when Beardsley became art director for the daring and short-lived literary quarterly The Yellow Book. Even his interpretation of the Cinderella story, appearing in The Yellow Book of July 1894, upset some people with its contrarian ending of jealousy and murder. A caption narrates that the heroine died soon after her marriage to the prince, poisoned by her elder sister with powdered glass… alas for the glass slippers. With this watercolour-and-ink version of the Cinderella illustration there is a rare intrusion of vivid coloration– a brooding red dominating – into the exhibition. 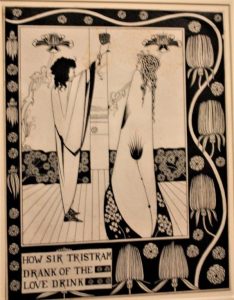 How Sir Tristram Drank of the Love Drink.

Otherwise, apart from black and white, yellow is the colour, as bound editions and plates from The Yellow Book are displayed alongside works from a successor periodical, The Savoy. Yellow was a colour used for the covers of explicit French novels.

After the outcry that followed the arrest and trial of Wilde for “gross indecency” in early 1895, Beardsley’s publisher John Lane and others swiftly dropped the artist. One of the few publishers who stood by him was Leonard Smithers, who specialised in clandestine editions of titillating titles and encouraged Beardsley to illustrate Lysistrata and other texts. 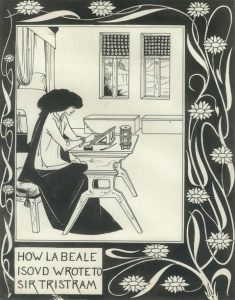 In another dip into Greek mythology, Beardsley pictured Atalanta, a ruthless huntress who wounded the monstrous Calydon boar which had been sent by Artemis – goddess variously of the hunt, the wilderness, wild animals, the Moon, and chastity – to terrorise the Calydon region in Aetolia because its king failed to honour her sufficiently.

Another important commission was in 1893-4 for Thomas Malory’s Le Morte d’Arthur. Tate describes How Sir Tristram Drank of the Love Drink (from Harvard Art Museums/Fogg Museum) as “one of the boldest and most rhythmic drawings.” Another fine panel on show is How la Beale Isoud Wrote to Sir Tristram. His treatment was doubtless influenced by Wagner’s opera Tristan und Isolde; in one chapter heading a female figure is seen playing the cello. 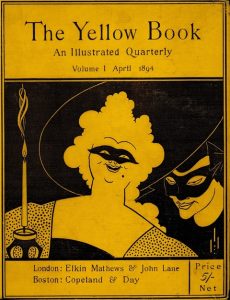 He illustrated Alexander Pope’s The Rape of the Lock, of which five of the original drawings are shown together for the first time.  In The Dream, an extravagantly-dressed suitor peers through the elaborately embroidered bed-curtains to spy on the rich and beautiful Belinda, the protagonist of the poem. The suitor probably represents the “morning dream” about a handsome young man sent to Belinda by her guardian.

A room in the exhibition is dedicated to portraits of Beardsley and the artist’s wider circle. He responded to his contemporaries such as Gustave Moreau, Burne-Jones and Toulouse Lautrec, whose works are shown to provide context for the period.

The artist was preoccupied with his own image. A self-portrait, showing a gaunt young man with a concentrated expression, was completed in his 20th year.  Further striking self-portraits and depictions by Walter Sickert, Jacques-Emile Blanche and others appear throughout the exhibition. 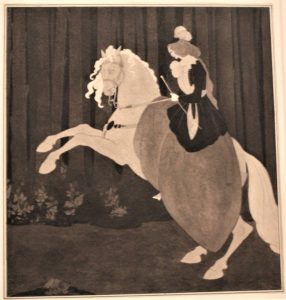 He was close to his sister Mabel and a portrait of her dressed in Elizabethan costume as a page boy was painted in oil on canvas by Sir Oswald Birley (1880-1952) whose models were up-and-coming actresses in their theatrical and music hall guises. Mabel began her acting career on the London stage in 1884; from 1912, she was close to the poet WB Yeats. Born in 1871, Mabel died at the age of 46.

Aubrey’s fascination with music is brought out. He was an avid opera goer and enjoyed Tannhäuser at Covent Garden – there is an illustration of Wagner’s opera Siegfried.

On show is Frontispiece to Chopin’s Third Ballade, unpublished in the lifetime of Beardsley. He loved the music of Frédéric Chopin, another talent whose life was cut short by tuberculosis, in 1849 at the age of 39. In the drawing, a woman rider controls a rearing horse, an action said to evoke the syncopated passage at the beginning of the second part of the ballade, and another demonstration of the artist’s admiration for strong-willed women. This design from 1895 was used to illustrate Beardsley’s obituary in The Studio in 1898. 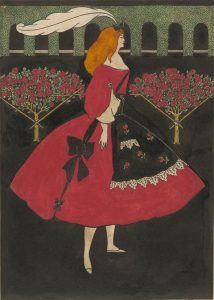 The Slippers of Cinderella.

Always in command of his idiom, Beardsley was ideally suited to the technology of the time: line block printing enabled his work to be reproduced easily for wide circulation. He was influenced by Japanese ukiyo-e prints from the Edo period (1615-1868) which were gaining popularity in Europe.

His legacy, including the development of the Art Nouveau and poster styles is strongly highlighted, including Picasso‘s Portrait of Marie Derval of 1901.

Appropriation of his imagery surged in the 1960s as London became the playground of “male peacocks” and “liberated” young women. Perhaps most stunning is a 1966 advertisement for Elliott Alice Boots. Designer Paul Christodoulou lent his talents to promote a shoe shop in Notting Hill Gate, T Elliott & Sons, and its Victorian-style footwear. The lithograph incorporates a pastiche of a dozen Beardsley designs. 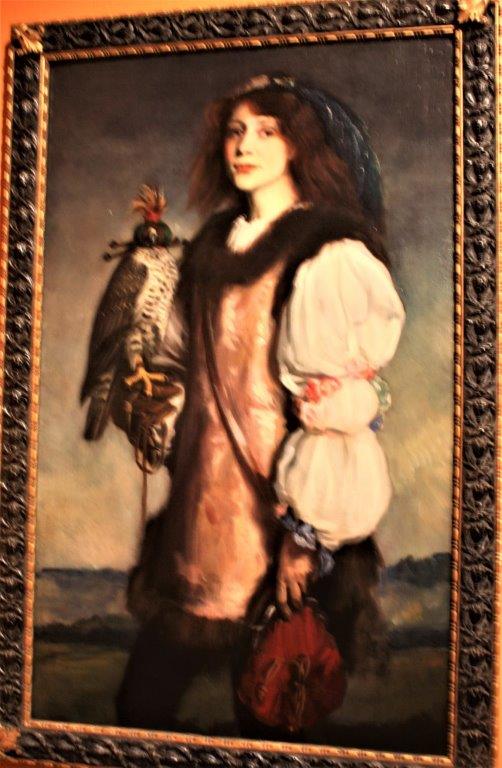 Mabel Beardsley as a Page. By Sir Oswald Birley.

There is artwork by the German artist, musician and producer Klaus Voormann for the cover of Revolver, the 1966 LP by the Beatles. This came out in the same year as the Beardsley exhibition at the V&A, which has provided many images for the current show. Voormann’s black and white drawing style was distinct but was popularly associated with Beardsley. 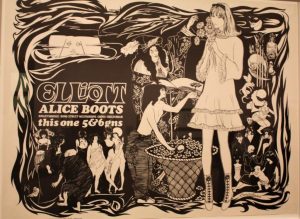 The exhibition is organised by Tate Britain in collaboration with the Musée d’Orsay, Paris, and curated by Ms Corbeau-Parsons, Tate curator of British art 1850-1915, and independent curator Stephen Calloway, with Alice Insley, assistant Tate curator of historic British art. 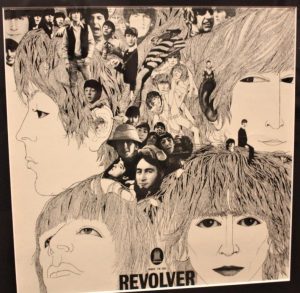 Perseus pursued by the Gorgons (detail). By Sir Edward Burne-Jones.

The Slippers of Cinderella. 1894. Ink and watercolour on paper. Mark Samuels Lasner Collection, University of Delaware Library, Museums and Press.

The exhibition continues at Tate Britain, Millbank, London SW1 until May 25, 2020.