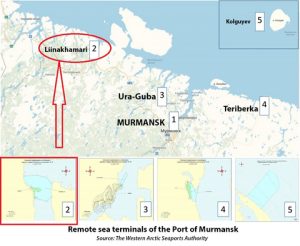 Accelerated development of Russia’s Arctic requires the creation of related stevedoring infrastructure for handling of transit and project cargo. The north-west of the Murmansk Region, namely the Liinakhamari area, is a favorable location for a transshipment facility.

Turn to the gate

As it is known, Arctic development is among the priorities of the state policy. Apart from transportation of liquefied natural gas, oi and coal from the Arctic production facilities, the development plans foresee arrangement of regular transit shipping along the Northern Sea Route, for both international and domestic cargo. Besides, development of the mineral resources base in the Arctic suggests transportation of supplies.
“As for the summer-autumn navigation, I expect the annual level of 3-5 million tonnes (NSR transit cargo – Ed.) that can be achieved in the coming three-five years”, said Vyacheslav Ruksha, Deputy Director of Rosatom – Director of Rosatom’s Northern Sea Route Directorate, adding that there are prospects for the development of international transit on the Northern Sea Route.

Arctic logistics is not limited by the Northern Sea Route which begins at the Kara Gate in the west and at the Bering Strait in the east as specified by the international legislation.

In his interview with IAA PortNews, Maxim Kulinko, Deputy Head of the Northern Sea Route Directorate – Head of Rosatom’s Department for Development of NSR and Costal Territories, said that a new concept, ‘Northern Sea Transport Corridor’, is currently under consideration.

“In some sense, it is a revival of the Soviet Union practices with Glavsevmorput responsible for the route between Murmansk and Kamchatka. It is not a substitution for the Northern Sea Route but it is a more correct model for economic development of our northern waters”, said Maxim Kulinko.

Indeed, the Murmansk Region has been traditionally considered as a location of port facilities focused on transshipment of cargo from Arctic class ships onto conventional ones and for handling of cargo under the Arctic projects on development of mineral resources. That makes sense as the region located at the North-Western border of Russia offers an access to water areas that are non-freezing thanks to the Gulf Stream.

Actually, the Murmansk Region is a vast territory with varying conditions for port activities.
The Kola Bay which currently hosts the bulk of port infrastructure of the region has a number of disadvantages. Among them is a significant deviation from the route along the seaway shipping canal (140 nautical mile), highly loaded pass with a need to wait the turn, 57 kilometers with considerable tide effect reducing the time window for mooring operations, 30 kilometers of obligatory pilotage, hosting of the military base of RF Navy’s Northern Fleet with regular closing of the water area for naval interests. Moreover, Murmansk is characterized by a certain social and environmental strain related to numerous transshipment facilities in the proximity to living quarters. 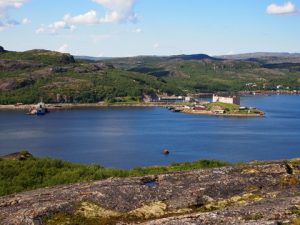 In this context, it seems more reasonable to locate new port facilities in the north-west of the Murmansk Region, namely in Liinakhamari settlement on the shore of the Devkina Zavod bay. When Liinakhamari was a part of Finland (“liina” is the Finnish for “tissue”) it was the only port with a direct exit to the ocean. Its advantages are evident even today: natural depth of up to 20 meters, non-freezing water area, a shorter deviation (35 nautical miles), less intensive traffic of ships and absence of naval base, shorter pilotage distance (6 kilometers) and shorter bay of Pechenega (17 kilometers). Besides, there are no dense residential areas in Liinakhamari, no environment protection zones but there are some infrastructure facilities like roads, networks, communications and Korzunovo airport 30 kilometers from the future facilities.

Taking into consideration the above mentioned factors, OOO Pribrezhny has commenced implementation of the project on construction of a transshipment facility in Liinakhamari with a focus on the Arctic logistics.

There is a plan to build the Western Gate terminal there for transshipment of containers from Arctic class ships onto conventional ones. As the name suggests, it will play the role of a western gate for the Northern Sea Transport Corridor. The terminal is to handle both transit and costal freight carried by the Northern Sea Route from the ports of the Far East with and offer an opportunity of its further shipment westwards.

The second terminal will handle cargo intended for mineral resource projects in the Arctic.

According to the preliminary project, the terminal is to occupy 25 hectares including reclaimed area. The total length of the waterfront will be 1,200 meters, length at the berth – 20 meters without any limit for the ship size. Its railway throughput capacity is estimated at 5.5 million tonnes per year with a possibility to be raised to 10 million tonnes. With round the year navigation at the terminal the ships are not expected to have an ice class for calling.

The container terminal will cover a territory of 20 hectares and a waterfront of 600 meters. Its storage capacity will be up to 10,000 containers with annual throughput capacity of 500,000 TEUs.

“If the terminal is focused on transit cargo of the Northern Sea Route, its capacity of 500,000 TEUs per year is probably sufficient at the initial phase. However, relying on the state plans this cargo flow is expected to grow considerably”, commented Alexander Goloviznin, Director of Logistics and Analytics at Morstroytechnology.
The Arctic projects supporting complex will occupy the territory of 5 hectares and will have a waterfront of 300 meters, storage and production facilities will be of 30,000 and 20,000 sqm, respectfully. It will be able handle Ro-Ro, Lo-Lo and Ro-Lo ships. The terminal with have a capacity of up to 1 million tonnes.

The Ministry for the Development of the Russian Far East and Arctic is considering attraction of investments in the project through issue of green bonds. In fact, Liinakhamari has enough free space for comprehensive processing and disposal of waste.

By RF Government’s Decree, the port of Liinakhamari is included into the limits of the port of Murmansk as its remote terminal (land section No21 and water section No3) and open for foreign ships.

The engineering survey and project documentation development is to be conducted in 2020 with the construction to be completed in the second quarter of 2024, the time when the state expects the Northern Sea Route traffic to reach 80 million tonnes per year including 3-5 million tonnes of transit cargo.