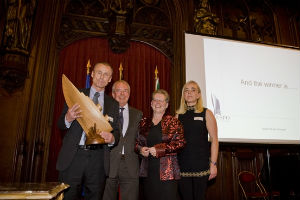 Following editions of Award on Societal Integration of Ports to focus on youth and heritage
“Nothing less than a manual of best practice for port communication campaigns.” This is how the jury motivated its unanimous decision to pick Ports of Stockholm as the winner of the third ESPO Award on Societal Integration of Ports. The Award was handed out last night during a ceremony held at the Brussels Town Hall in the presence of Commission Vice-President Siim Kallas and more than 200 representatives from the European port and logistics community and EU policy-makers.

The theme of this year’s competition was ‘Creative Strategies to Communicate the Port to the Wider Public’. Seventeen port authorities responded to the theme, with innovative and inspiring projects. A high rate of response, which shows that more and more ports care about the way they interact with society around them. The submissions of the ports of Koper, Stockholm and Thessaloniki were shortlisted early September and it was Stockholm’s project ‘Port Vision 2015’ that charmed the jury most. The jury found that it scored best on all aspects of the theme and especially valued the comprehensive, multi-faceted and strategic approach of Ports of Stockholm.

During the ceremony, ESPO Chairman Victor Schoenmakers announced the themes for the next editions of the Award. The 2012 competition will focus on projects that connect ports to young people, either through education or work. And in 2013 the emphasis will be on the contemporary use and promotion of port heritage. Next year’s competition will open on 15 January and all the necessary announcements will be made available by then.

The ESPO Award on Societal Integration of Ports was established in 2009 to promote innovative projects of port authorities that improve societal integration of ports, especially with the city or wider community in which they are located. In this way, the Award wants to stimulate the sustainable development of European ports and their cities.