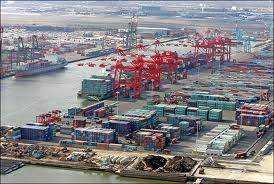 The Port Authority of New York and New Jersey recently announced that the Board has approved a new cost-effective architectural design developed for the exterior cladding system that will cover the 185-foot tall secure base of One World Trade Center. Approval of the plan and hiring of the firm to engineer, fabricate and install this podium wall cladding system is a significant step forward as One World Trade Center climbs to the 104th floor.
The Board authorized $37.2 million towards project and contract costs with Permasteelisa North American Corporation to engineer, fabricate and install the new panelized façade, which will consist of stainless steel slat panels around the building’s concrete base covered with glass fins. The glass fins will reflect light during the day, giving the building’s base a distinctive look.
The new design – which is significantly less expensive than the original one – provides a unique aesthetic look at the base of the tower and covers the secure podium structures.
Installation of the redesigned façade system will begin in 2013 and will keep pace with the scheduled completion of the tower by the end of that year. Work also is under way to install more than 12, 000 traditional ultraclear glass panels to the building’s steel frame.

Port Authority Chairman David Samson said, “The World Trade Center site continues to progress at a historic pace and approving this design is a cost-effective solution to a complex problem. It provides a practical way to cover the tower’s secure base, and give it an innovative, inviting look for the thousands of workers who will be employed there and the millions of tourists who will visit it.”
Port Authority Executive Director Pat Foye said, “By responding quickly when a technical issue arose, we have kept this project on schedule and continued the momentum behind our rebuilding efforts at the site.
Port Authority Deputy Executive Director Bill Baroni said, “One World Trade Center will be the strongest office building ever built, and the cladding system that has been selected for the base is one of the elements that ensures we will meet that goal. Not only will this system be cost-effective, but it will also provide a unique façade benefitting an iconic building.”
At its monthly meeting this afternoon, the Board of Commissioners took the following additional actions:
Authorized a $20 million project for the rehabilitation and widening of Taxiway C at John F. Kennedy International Airport. The project could generate 120 jobs and $32 million in economic activity.
Authorized the Chairman and Vice Chairman to arrange for the retention of a consultant to participate in the comprehensive review of the agency requested by the two governors and being conducted by the Special Committee of the Board of Commissioners, which was established by the Chairman for the purpose of reviewing the agency’s past and current governance, management and financial practices.
Authorized an additional $53 million to support property acquisition as part of the Goethals Bridge Modernization Program.
Authorized a long-term lease with Lufthansa Airlines for approximately 5, 000 square feet of space for use as a first-class lounge in Terminal B at Newark Liberty International Airport.
Authorized the Executive Director to enter into agreements with the Federal Aviation Administration, on an as-needed basis, for reimbursement of costs and expenses associated with work performed by the Port Authority on the FAA’s behalf.
Authorized the award of a construction trade contract with Skanska Koch Inc., for architectural steel for the north and south concourse in the Transit Hall in the World Trade Center Transportation Hub.
Authorized the award of a construction trade contract to Eagle One Roofing Contractors Inc., for roofing and waterproofing for the World Trade Center Vehicle Security Center.
Authorized the award of a construction trade contract to Holt Construction Corp. for masonry for the World Trade Center Vehicle Security Center.
Authorized $5 million in planning to support the final design of Liberty Park at the World Trade Center site.
Authorized the award of a construction trade contract with Eurotech Construction Corp. for concrete and waterproofing work associated with the World Trade Center site retail and parking areas.

Care for crew as well as environment says Intermanager