Cruise of the Year 2011 Special Award Goes to Fuji Maru 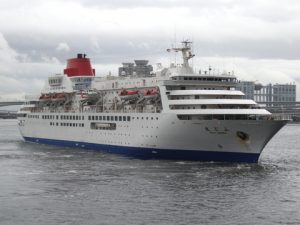 The award ceremony was held at the Kaiun Building on Wednesday, December 14. A memento was given to executives from MOL, which planned the cruise aimed at supporting the afflicted communities, and Fuji Maru Captain Keiji Kan and crew members.
Messages from residents of the disaster-stricken areas, who visited the ship for meals, rest, and baths, were on display at the ceremony. Comments from the guests included “Great program, ” and “What a moving story.”
The support cruise by the Fuji Maru called at Ofunato, Kamaishi, and Miyako ports for a week from Monday, April 11 to Sunday April 17. At each port, local citizens came on board the ship and enjoyed freshly prepared meals, a large Japanese-style bath, and rest in private passenger cabins. A total of 4, 451 people visited the ship during its calls.

“We once again express our appreciation to everyone involved at the Ministry of Land, Infrastructure, Transport and Tourism, Iwate Prefecture, and municipalities that made efforts to sailing for support at the disaster-stricken areas by Fuji Maru under such difficult conditions immediately after the earthquake, ” MOL President Muto said.
One of the comments from a visitor to the ship said: “I can hang tough in these difficult times by dreaming of someday boarding the Fuji Maru and taking a trip.”
“Comments like this from those afflicted by this disaster will inspire us to further refine the “heartful hospitality” on the cruise ship, while continuing our efforts to help with reconstruction of the stricken areas using the MOL Group network, ” Muto added.

Santa of the sea delivers Christmas to cruise...

Capes’ volatility brings down the BDI; Geopolitical and...

The Cruise Industry and the Global Sustainable Tourism...

Capes’ “surge” in a rather grounded Dry Market...