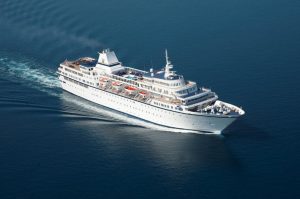 – James Brewer reports from the Destinations travel show in London. Cruise lines and operators are hoping that the UK passenger market will help keep them buoyant, after a difficult 12 months which saw itineraries modified and scrapped because of upheavals in Arab nations, and the reputation-shaking impact of the “Costa Concordia” casualty. Industry representatives at The Times presents Destinations: The Holiday & Travel Show at Earls Court exhibition centre, said that there had been a few nervous phone calls from potential customers, but that interest remained strong.

Many of the 300 UK and overseas travel companies and tourist offices at the show, which has been staged in February for 18 years, were offering incentives and deals to galvanise the cruise sector.

One promotion being stepped up was Cruise Miles, run by Reader Offers Ltd, an independent retailer for many leading lines.  The scheme offers price savings, upgrades and priority booking. The agent is a gateway for cruise suppliers including Regent, Silversea, Norwegian, Cunard, Celebrity, Holland America, Fred Olsen, Royal Caribbean, Celebrity, Seabourn, MSC and Hurtigruten. It offered 5, 000 free ‘cruise miles’ to cruise enthusiasts who signed up at the show.

Among many Destinations exhibitors with a strong maritime link was Voyages to Antiquity, an Oxford-based company that a few weeks ago announced an agreement to work with Advantage Travel Centres, which is described as the UK’s largest independent travel agency consortium, with around 800 outlets.

The agreement sees Advantage selling Voyages to Antiquity programmes for the Mediterranean in summer 2012 and a new Far East winter 2012-13 programme. This is the cruise line’s third season in the Mediterranean. The company deploys the 11, 563 gt, Malta-registered Aegean Odyssey. Originally a mid-size vessel with capacity for 570 passengers, she underwent refit in Greece in a new configuration of suites, junior suites and staterooms, including balcony cabins, giving more ample accommodation to around 350 passengers. Entrepreneur Gerry Herrod bought the former Aegean I as flagship for the new operation. Mr Herrod was previously involved in ventures including Ocean Cruise Line and Orient Lines.

Boosting its profile, Voyages to Antiquity had show fare deals including a 14-day trip entitled The Minoan Civilisation: Athens to Rome, with prices from £2, 095. The 15-day Light of Greece voyage, starting and culminating in Athens, was from £2, 650, which the company said was a saving of £1, 600.

Another company, Cruise & Maritime Voyages, offered an eight-night Easter break with prices starting at £599, sailing from Tilbury, to the French ports of St Jean de Luz, Le Verdon, Honfleur and Brest and then to St Peter Port, Guernsey. The company’s seven-night Titanic commemorative centenary voyage, visiting Belfast and Liverpool, had places available from £499.

Polar and Norwegian coastal expert group Hurtigruten has added to its portfolio of voyages, to explore the landscape and wildlife of Spitsbergen. Interest has grown in the region following Prince Harry’s Arctic expedition and the Frozen Planet TV programme.

Discover the World has new Spitsbergen Family Adventure Cruises which give the opportunity to view polar bears in the wild.

One of the ships operated for Antarctic cruising by Chimu Adventures

Viking River Cruises is offering savings of up to £1, 000 on selected 2012 cruises. Its extensive range of tours includes traditional European cruises, and a chance to sail through the Three Gorges region on the 256-passenger Viking Emerald, described as China’s newest and most elegant river cruise ship.

Turning to warmer climes, Travel Indochina has launched a Mekong river cruises programme featuring travel between Ho Chi Minh City and Siem Reap on the Heritage Lines flagship, the Jahan, with 26 spacious cabins; and the four-deck Jayavarman which is French colonial in design and has 14 boutique-hotel style cabins.

Cyprus Tourism Organisation is promoting the opening of Limassol Marina, one of the biggest in the region. The yachting and property development is, according to its backers, “designed to blend seamlessly with the city’s historic harbour, old town and medieval castle.”