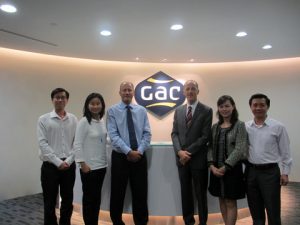 GAC Singapore is marking the 30th anniversary of its establishment by relocating to a new head office to enable future expansion of its operations.

The company, which has significantly expanded its portfolio of services since its establishment as a ship agent in 1981, now employs 145 staff at four locations in Singapore, and is looking to expand further in 2012.

An increase in business is expected as a result of a number of major infrastructural improvements in the pipeline for Singapore. These include a new LNG terminal on Jurong Island due to begin commercial operations in 2013, and the opening of Singapore’s International Cruise Terminal (ICT) later this year.

Managing Director Ronald Lichtenecker says: “What started as a small ship agency operation has grown into a one-stop solution for all shipping agency and forwarding solutions, complemented by bunker trading and weather routing services, ship spare deliveries and HUB agency services. Our logistics team has also expanded, not only to cover general freight but also specialist delivery of project cargoes, with a strong focus on the oil and gas sector. Paired with GAC’s global network of offices, we are able to handle freight in all parts of the world.

“Being able to celebrate our 30 years of operation in Singapore by moving to a larger, modern office to support our ongoing growth in years to come is testament to the hard work and dedication of our staff over three decades which has established GAC as one of the largest and most highly regarded ship agents in Singapore. We are determined to build on that success, and 2012 will be an important year for GAC Singapore as we work to expand our services and continue to promote Singapore as a key maritime hub.”

GAC Singapore will start training its boarding officers to handle LNG ships, drawing on the expertise of colleagues serving the sector at ports around the world to support the region’s growing trade.

Further, in response to the opening of the new International Cruise Terminal (ICT) with two dedicated cruise berths, GAC Singapore will also tap into the Group’s experience and expertise in the industry to serve the developing cruise tourism across South-East Asia and help raise Singapore’s profile as a leading port and strategic hub.

All GAC Singapore’s operations are supported by a firm commitment to safety and professionalism, as it upgrades the HSSE standards to Bizsafe Level 3.