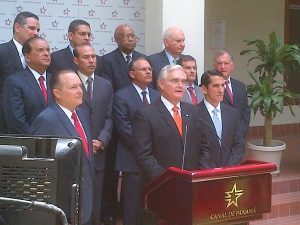 It has just been revealed in Panama that Engineer Jorge Luis Quijano is the new Administrator of the Panamá Canal Authority.

The President of the Board of Directors of the Panama Canal Authority and Canal Minister, Mr Romulo Roux today announced that the new Administrator of the Panamá Canal Authority (ACP) for seven years starting from the 4th of September this year, will be Engineer Jorge L. Quijano. He will replace Alberto Alemán Zubieta, who has been the current Administrator for the last 16 years. Engineer Alberto Alemán Zubieta will be in office until next September 2012. The new Panama Canal will be opened to the world commerce in 2014.

Jorge L. Quijano is an Industrial Engineer, graduate of Lamar University in Beaumont, Texas, and holds a Master of Engineering Degree in Industrial Engineering and Management. He began his professional development in the Texaco Oil Refinery in Panama, where he worked as a Process Engineer and Product Forecaster. Quijano, currently the executive vice president of engineering and management of the ACP, began his career in the Canal more than 30 years ago. He will oversee the completion of the Canal expansion, due to be finished in 2014. In an interview last August, Quijano said that the expansion “is a unique project in the world” and “will bring better days to all Panamanians.” Quijano is an industrial engineer with a master’s degree in engineering from Lamar University, Beaumont, Texas. He has also been a professor of administration of ports and canals in the Faculty of Law at the University of Panama.

He has been working at the Panama Canal for 36 years. He became Maritime Operations Director in 1999. In September 2006 he was designated to administer the Panama Canal’s US$5.25 billion Expansion Program, and in 2007 he was appointed as Executive Vice President of the Engineering and Programs Management Department.

Canal Minister, Mr Romulo Roux explained to the press that the Panama Canal board of Directors have been through a six months process to choose the new Administrator as they were looking for a profile that would respond to the new challenges of the waterway, now in the middle of a US$5, 25b expansion programme.

Note: the above has been prepared by Maria Dixon/ISM Shipping Solutions gathering information from Panama’s local newspapers and media.