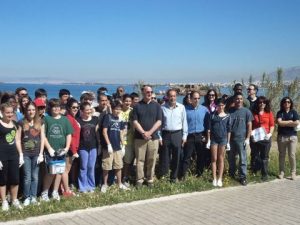 US Ambassador Daniel Smith and Helmepa's Chairman Dr. John Coustas in the centre

Volunteers from the U.S. Embassy in Greece and the American Community School (ACS) of Athens gathered on Friday 27 April at Kavouri beach in Vouliagmeni to participate in a beach cleanup coordinated by the Hellenic Marine Environment Protection Association – HELMEPA.

The 120 participating volunteers consisted of Embassy employees and ACS middle- school students and their teachers. Volunteers were joined by U.S. Ambassador Daniel B. Smith and his wife Diane Smith who helped in the clean-up effort.

Speaking to the volunteers, Ambassador Smith stressed the importance of civic participation and working together to preserve the environment. “We are all here today to do what we can to protect our natural environment and to keep Greece’s coastline and sea beautiful, ” he said. “For 30 years HELMEPA has been doing a tremendous job protecting the ocean and marine life.  We hope to collaborate again in the future.”

The Chairman of HELMEPA, Dr. John Coustas, warmly thanked all those present for participating and made reference to the 30-years long efforts of HELMEPA in fostering environmental consciousness throughout shipping and the wider community. Addressing the young students, he stressed the importance of the marine and coastal environments for Greece and expressed the wish that they display a more mature attitude towards the environment compared to previous generations. 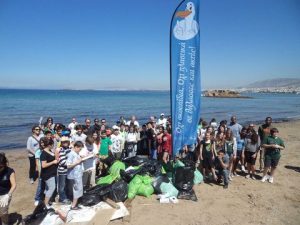 Clean up participants with their findings

On behalf of the Municipality of Vari – Voula – Vouliagmeni, Mr. George Mavrotas, former water-polo champion of Greece and current Chairman of the Vouliagmeni Local Council, in turn welcomed the volunteers to the beach and spoke about the significance of such voluntary actions in enhancing environmental awareness.

After over an hour of collecting and recording litter, the results proved impressive: 80 large trash bags weighing approximately 700kg were accumulated. The vast majority of garbage originated from shoreline and recreational activities and consisted of plastic items such as bags, straws, food wrappers, bottles and lids. Volunteers were also amazed to find peculiar items such as a beach bed, a baby car seat, a car wheel, a 4-metre long ‘ghost-net’, a mattress and a 3-metre long plastic pipe!

All participants agreed to meet again September 15th, International Coastal Cleanup day, in order to see first hand the effects of an entire summer’s worth of beach activities on this picturesque coastal landscape.