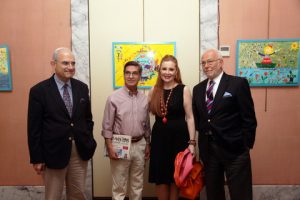 The Inauguration of the Exhibition titled “The Seas, Forests and Mountains are our Treasure” took place yesterday, Wednesday 2nd May, at the historic site of the Museum of the City of Athens Vouros-Eutaxias Foundation. The 54 group artworks on display are a representative sample of entries that have taken part in Panhellenic Drawing Competitions held over the last decade by the HELMEPA Junior Program. The works belong to 880 students aged between 5 and 13 years and who are from 32 cities, villages and islands of Greece.

The Chairman of the Museum, Mr. Anthony Vogiatzis, welcomed HELMEPA, congratulating the Association on the significant work accomplished throughout its 30 years in operation. He went on to emphasize the fact that “The residents of Athens hail from all over Greece and so the Exhibition contains group works of young children who are from all over the country and is hosted ‘In Athens’, as the Ancient Greeks once said. Through their artworks, the children have shown us yet again how we may preserve, nurture and optimize Greek natural beauty employing the best possible environmentally-friendly means”.

In his address, the Director General of HELMEPA, Mr. Dimitris Mitsatsos, thanked the co-organisers for their warm hospitality, made mention of HELMEPA’s years-long and challenging achievements, the vision of its founders and the contribution of Greek shipping to the environmental awareness of children. In closing, Mr. Mitsatsos said that, “even though numbers-wise, the members of HELMEPA are not overwhelmingly many,   they consistently persist in their efforts, spurred on by the fact that it usually only takes a few to make a difference”.   On behalf of HELMEPA’s Board of Directors, member merchant marine Master Iakovos Perantinos, addressed guests in turn. In speaking of his own close relationship with the sea, he encouraged those present to try to elicit the true messages the children wanted to convey to the older generations through their works.

The Museum’s Director, Mrs. Aglaia Archontidou-Argiri, thanked all those who contributed to the organizing of the event and mentioned that “here in Athens, where the heart of the entire nation beats, armed with the belief that culture and environment are two intertwined concepts, we at the Museum of the City of Athens embrace HELMEPA’s initiatives for the raising of awareness of students and of consciousness of adults for the protection of the marine environment”. 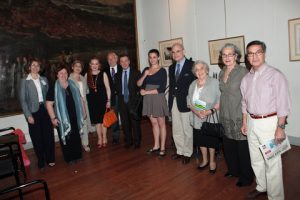 Ms. Irene Daifas, member of HELMEPA’s Board of Directors, selected members of the shipping community, friends of the Museum, volunteer teachers of the HELMEPA Junior Program, the Chairman of the Gina Bachauer International Piano Foundation and other esteemed guests, honored the event with their presence.

The children’s artworks which were aptly illuminated, impressed all those present with both the sensitivity with which they approach natural wonders and the immediacy with which they demand of adults that they show respect towards the environment.

The Exhibition will be open to the public Monday to Friday between 9am and 4pm (closed Tuesdays) and Saturdays and Sundays from 10am to 3pm.