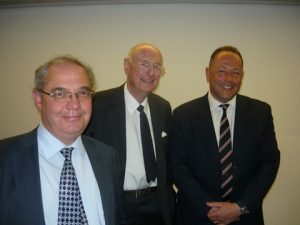 The International Maritime Industries Forum has tackled the subject of piracy – and how to deal with it – at several IMIF luncheons over the years – and sadly the problem remains. This time at the offices of Brit Insurance in London’s Bishopgate the speaker was Mark Hankey, CEO of Flag Victor addressing the IMIF delegates and he recommended narrowing the field down to a tighter set of boundaries.  John Faraclas was there with his camera recording this special event aiming at safety, security and justice too.

If you GOOGLE in “maritime security team” he said, you will get over 8 million results – whereas if you GOOGLE in “maritime security procurement” you will only get 1.5 million results – a considerable reduction to concentrate on! “Regretfully” said IMIF Chairman Jim Davis, as he introduced the guest speaker, “the goalposts have been moved. In the past the pirates were aiming to seize the ship and its cargo – nowadays it is the crew they are after – it is no longer really piracy but kidnapping!”

“In the old days the counter-piracy measures were carefully concealed, ” Mark Hankey continued, “but nowadays they are very transparent with some rather curious implications.”  So let us look at these security companies, the personnel, the weapons and how new regulations will govern approaches in the future. There are also the anti-piracy costs to consider. Some firms offering security offer ‘safe passage for the owners’ vessel – with the cheapest maritime security on the market.’ How do you offer the ‘cheapest’ maritime security? He asked. Presumably by providing guards with ‘no insurance’ and ‘no training’ and ‘out-of-date weapons’ and ‘dubious rules of engagement’ – oh yes ‘and no maritime experience!’ You can smile.

Let’s look at how some companies promote their services. One offers a customized PASSIVE / ACTIVE protection and it GUARANTEES that your vessel will not be kidnapped. (Or you get your money back??)  Another which has lured Estonian Navy personnel to join it with the promise of an inflated salary doesn’t actually provide written contracts for its new employees. The embalmed body of a former forensic detective in the South African police service was returned home two weeks ago having died a slow death without proper medical care. He had fallen ill guarding a ship where there was no doctor on board (at $1000 a day this was too expensive a cost to provide) on a ship where bacteria contaminating the food and dirty drinking water was found to be the norm. The sick man’s father challenged the owners who finally agreed to fly the sick man home but he died before this could be arranged. Other slides showed a tailor’s dummy in security guard uniform equipped with a wooden fake rifle intended to give the perception of an armed guard on board. There was an advert aimed at security guards asking if anyone was interested in a month’s transit starting in a few days. Replies came from a gap year student along with some security guards currently protecting a West End jewellery firm but with no maritime experience at all. There was also an email telling of a friend on a vessel off the coast of Kenya and a Team Leader of the Security Guards who got so drunk with the Captain that he was unable to complete his watch.

A slide appeared on the screen – armed guards clearly visible on deck – then the view changed to a video showing a suspect speedboat approaching. The Brit Insurance hall was overwhelmed by the sound of countless rounds of ammunition being discharged. It went on and on and on and on and on in a continuous cacophony of violent sound. Finally the sound ceased. The audience gradually regained its senses. ‘Would you describe the response you just witnessed’ asked Mark Hankey all wide-eyed and innocent, ‘as falling within the realms of “proportionality”?’

This triggered off a most interesting difference of opinion between the IMIF delegates. John Noble said that if you are attacked you obviously need to defend yourself. Jean Richards said that a PMSC needs to be the ‘bigger dog’, adding that she thought they were warning shots, they were way off target – they were warnings. Someone else commented that armed guards knew that they were the pirates’ first target and that they would be killed anyway by the pirates if captured by them. Is it realistic to call this self-defence? the debate continued.

Not when guns are set up on board to deliberately meet the pirates’ onslaught head-on, it continued.

Elinor Dautlich of HFW commented on BIMCO’s Guardcon which she helped to produce, explaining that it did not apply as a one-size-fits-all international solution. “What are the rules of engagement?” asked IMIF Chairman Jim Davis. Mark Hankey listed them as 1/. Sound the ship’s siren 2/. ‘Show’ the weapons – ‘we are armed!’ 3/. Fire warning shots (but not a barrage) 4/. With a rifle place a series of specific warning near-misses.

Anil Deshpande from Foresight felt that you had to be amply prepared – with proper training – so as not to do something rash. “They’re not always pirates”, said another, “a lot of smaller fishing vessels like to come up in your wake – your propeller does the fishing for them!”

It was agreed that well-meant regulations sometimes left the owners with their hands ‘tied’ by the law. Other problems involved whether some security contractors had to ditch their weapons overboard before entering certain ports – was this true?

Reference was made to the US Coastguard practice of accepting certain areas of a vessel being locked with a ‘Customs’ padlock  – not an actual firearms safe but designated as such for the period of the berthing. Unfortunately Flag requirements are complex and varied. Other instances of ‘bungled’ protection were cited – together with the recommended ‘body’ meant to resolve the present ‘patchy’ security available, namely the SCEG – the Security in Complex Environments Group – referred to as the UK Government’s partner for the regulation and accreditation of private security providers.

Mark Hankey pointed out that the geographic size of the Indian Ocean was over 2.5 million square miles and in this context that a warship could cover an area of around 360 – 400 miles a day while remaining fuel efficient – at a running cost of around $112, 000 per day – an expensive option at a time when governments were looking to reduce their costs. Additionally he mentioned Nigeria and that probably 12% of bunkers were being illegally syphoned off there – and that illegal narcotics deals had increased by 400%.

Mark Hankey suggested that with so many leaks of information nowadays occurring by email encryption now had to become a normal practice.

Jim Davis recalled the ‘Achille Lauro’, then related how he had asked an RN commander, when Jim was involved with the management of ‘Oriana’ what he would have done if that vessel had been hijacked. “Probably have blasted the steering off” was the RN reply. Jim raised his eyebrows to the delegates. ‘You can imagine my response to that offer of help!’ he said dryly.

“We’re not actually winning this one at present” he mused, thanking host Simon Stonehouse and guest speaker Mark Hankey.

It never rains, but it pours