The Winners and Runners up

Richard Fain, Chairman and CEO of Royal Caribbean Cruises Ltd, was presented with the Seatrade Personality Award for 2012 (sponsored by ClassNK) at the Seatrade Awards Ceremony Dinner on Monday 14 May 2012. The award was in recognition of his major contribution to the cruise industry, both in the spectacular development of the cruise product and in the globalisation of cruise tourism.

Richard Fain said “I take this award with great humility. To receive this honour from Seatrade, handed to me by the IMO Secretary-General, is very much a reminder of how important it is that each and every one of us in this great industry to which I have devoted my business career, maintains a high level of excellence.” 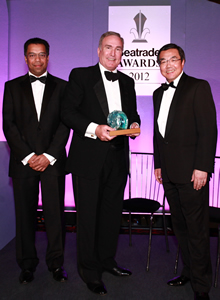 The 24th Seatrade Awards Ceremony Dinner took place last night at London’s Guildhall in the presence of IMO Secretary-General, Koji Sekimizu, Chairman of the panel of judges of the Seatrade Awards and Guest speaker, The Rt Hon Michael Portillo. Over 400 members of the maritime community celebrated the outstanding contributions made over the last year for safe, efficient and environmentally friendly shipping.

Robert D Somerville, Chairman of ABS was presented with the Lifetime Achievement Award (sponsored by Oman Drydock Company). The Award recognised his outstanding contribution to the shipping industry in a career of almost 40 years with ABS, and in particular his engagement with maritime safety and education.

Mr Somerville said “I am truly humbled and honoured to receive this award. None of these successes would have been possible without the support of the people of ABS with who I have had the pleasure and honour of working with for so many years. It has been a privilege for me to have been a part of that remarkable team of individuals.” 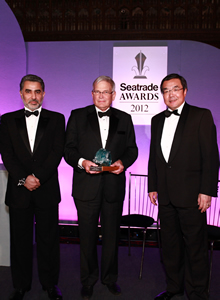 There was a special Seatrade Award for Countering Piracy (sponsored by DP World), which was awarded to SaveOurSeafarers. The award was accepted by their Chairman, Alastair Evitt – already in this site under title: “Top Maritime Award for SaveOurSeafarers”.-

The IMO: One hundred years after the Titanic Award (sponsored by China Classification Society), in support of the IMO’s theme for World Maritime Day for 2012 was awarded to AMVER, the Automated Mutual-Assistance Vessel Rescue System, a worldwide voluntary reporting system sponsored by the United States Coast Guard.

The Seatrade Global Performer 2012 Award (sponsored by DNV) recognised the remarkable advances made in the past year by China’s maritime industry, with recognition given to three major organisations:

The award categories, which closely reflect the IMO’s own aims and objectives recognise those who have made exceptional contributions over the last year for safe, efficient and environmentally friendly shipping, recognising and celebrating innovation and commitment to improving maritime standards:

Koji Sekimizu, Secretary-General of the IMO concluded the evening by saying, “Through these challenging times for the shipping industry, the Seatrade Awards once again provide an encouraging reminder that shipping is still able to tap into a rich vein of innovation and excellence by recognising and celebrating those who have demonstrated a clear ability to make improvements in key areas such as safety at sea and clean shipping and that these awards encourage others to strive for similar achievements.”

In keeping with the non-profit making motives of the Seatrade Awards scheme, Seatrade will make a donation from the proceeds to the Royal National Lifeboat Institution (RNLI) and The Mission to Seafarers.

Seatrade Awards
The Seatrade Awards first launched in 1988 and has now developed into one of the most respected and recognised global maritime award schemes, with the logo becoming an internationally recognised symbol of excellence. The scheme rewards those who have demonstrated innovative solutions for safe, efficient and environmentally friendly shipping and is in keeping with the goals and objectives of the International Maritime Organization.

Seatrade
Covering the globe – www.seatrade-global.com
Established over 40 years ago, Seatrade is a leader in maritime and cruise publications, conferences and exhibitions, training, awards and other special projects. Regular events include international trade exhibitions and conferences across all maritime sectors, management training courses for shipping professionals, training seminars for travel agents and maritime award schemes, including the prestigious Seatrade Awards held at the Guildhall in London. Seatrade publications include magazines, supplements and yearbooks, whilst daily maritime news is provided online by Sea Asia Online (www.seatrade-asia.com).