A nation of significant maritime standing: that conclusion is inescapable on any visit to South Africa House, the High Commission building in London’s Trafalgar Square. There are tributes to Prince Henry the Navigator who sent expeditions to explore the coast of Africa, to Vasco da Gama as the first European to reach the Cape of Good Hope, and to the Dutch East India Company which established the Cape Colony. There are fascinating maquettes of Durban Harbour and of Port Elizabeth.

Your correspondent was recently one of a small group led on a private tour of the impressive building by Conor Macklin, director of Grosvenor Gallery (21 Ryder Street London SW1), which has many years of association with South African artists.  The occasion was a temporary exhibition, Artists in Exile, of the work of three of the most renowned 20th century black South African artists, to mark the republic’s Freedom Day.

Although the sturdy Trafalgar Square edifice occupies an envied location in the heart of tourist London, few members of the public get the opportunity to glimpse the glories within. The building was designed at the height of empire fever by Sir Herbert Baker (1862-1946), who competed and sometimes collaborated with his more famous rival, Sir Edwin Lutyens (1869 -1944). Co-operation between the great architects led to blueprints for the Secretariat Building and Parliament House in New Delhi.  In Pretoria, Baker designed the National Assembly and much besides, but he fell out with Lutyens. Hewas more sympathetic to local traditions, which in the case of South Africa House resulted in sculpted images of springboks, elephants, and banana leaves. No expense was spared in the construction of the majestic London headquarters, which is embellished with beautiful marble and teak. 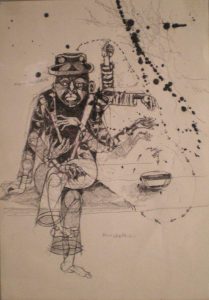 Big Me, Brain Me (black ink on paper) by Feni Dumile

It is also a temple to fine art, but the echoes of scenic grandeur , for instance the monumental, geometric landscapes of Jacobus Hendrik Pierneef (1886-1957) and all the nautical allusions scarcely acknowledge the existence of black people.  From the arrival of the white man at the Cape in 1652, the indigenous peoples of South Africa were treated as very much second or worse class citizens, until technically April 27 1994 when the first post-apartheid elections took place.

A notably exceptional major South African artist is Irma Stern (1894-1966), who loved the people and environment and, influenced by the German expressionists, achieved international recognition despite her work being at first being derided by some in South Africa as ‘ugly.’

On display recently at South Africa House were works from three more recent artists who equally had to overcome prejudice in their native land.

Gerard Sekoto (1913 – 1993) did achieve some success in the 1930s, producing work depicting life in the townships, and is now regarded not just as the pioneer of urban black art in South Africa, but as one of the fathers of modern South African art.

His work was in demand by galleries in Johannesburg, but he grew tired of the city and his work from the early 1940s was greatly influenced by the hardships endured by the poor people of Cape Town’s District Six.

With the coming to power of the Afrikaner Nationalist party and its policy of isolating the blacks, Sekoto revolted against the ominous change in atmosphere and in 1947 went into self-imposed exile in Paris, where he supported himself playing piano at a popular nightspot. The 1960s saw Sekoto exhibit in the US and Europe, with one of his strongest works a portrait of the singer and civil rights exile Miriam Makeba. His work from the 1970s took on a political edge in response to apartheid, and his impressionist Homage to Steve Biko is particularly moving. Towards the end of his life was granted his due recognition, and he died in Paris in 1993.

In District Six, artists including Dumile Feni (1939 – 1991) and Sydney Kumalo: (1935 – 1988) when young would party with musicians such as trumpeter and composer Hugh Masekela, but by 1960 the going got tough, with a tremendous crackdown on artists and musicians. Dumile was threatened by the police with removal to a reserve, and he reacted by emigrating to London, but of course the capital’s grand High Commission was alien to them – so it is poignant that their work is finally in this location, Mr Macklin said.

Self-taught Dumile reacted to the Sharpeville massacre which scarred a whole generation, by creating a harrowing image of the shoes left behind in the street by people fleeing the guns of police who had opened fire. He suffered poverty, despite the fact that his finely draughted sketches and sculptures are in most major South African museums.  Dumile came under pressure for criticising the regime, and an invitation to London from the Grosvenor Gallery for an exhibition gave him the opportunity to obtain his passport and visa. In the summer of 1969 Dumile had a show of 37 drawings at the gallery, which at the time was in Davies Street. One of his best pieces from that period is Theme for Black Modigliani, on cheap paper in ballpoint pen.

Although appreciated in London, he was desperately short of money, but he kept drawing and sculpting, and his enthusiasm for jazz music lent him cheer: he even designed record labels.

Sydney Kumalo was from a family forced out of the ‘white’ city of Johannesburg to Soweto. He had studied sculpture in Johannesburg, and one of his most striking productions is the 1960 bronze Xhosa Girl, just ahead of his first solo exhibition, and later shows in Johannesburg, London and other European cities, and New York.

Under the Riggings of the Sea in Wind-Rose...