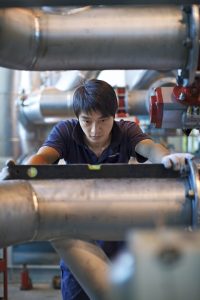 Wärtsilä Hamworthy, the global leader in environmental and liquid cargo handling solutions for the marine and oil & gas markets, has underscored its technical prowess in the offshore sector by winning the contract from Brazilian shipyard Ecovix-Engevix Construções Oceânicas S.A. to deliver Inert Gas Generator units to eight floating production, storage and offloading vessels (FPSOs) in the Santos Basin.

Six of the units will be deployed for the Tupi fields with the other two being utilised for the Guará field. The first two units will undergo full scale testing at the factory in Moss prior to delivery starting as soon as the end of December this year, up to the end of January 2015.

Odd Ivar Lindløv, Wärtsilä Moss Offshore Business Unit Director said: “Having successfully supplied inert gas systems during the last few years to the FPSOs Goliat, USAN, Pazflor, AKPO and most recently to BP’s QUAD 204 FPSO , this latest contract – by far our largest yet – puts us firmly at the forefront of the industry.

“We draw on the experience gained during deliveries to Petrobras FPSOs stretching back more than 14 years and we have developed a reputation for supplying reliable and technically astute solutions to the offshore market.”

Each of the units, measuring 7.5m x 6m x 7.5m and with a weight of approximately 45 tons, will be installed on the utility module on the FPSO inside a dedicated compartment. Each will be of the dual fuel type and the eight skids will be delivered complete with a control system, a diesel and gas fuel system and power distribution including VSD starters. Each skid will include two 100% systems, providing the required redundancy.   The eight FPSOs are currently under construction in Rio Grande do Sul State.

Wärtsilä is a global leader in complete lifecycle power solutions for the marine and energy markets. By emphasising technological innovation and total efficiency, Wärtsilä maximises the environmental and economic performance of the vessels and power plants of its customers. In 2011, Wärtsilä’s net sales totalled EUR 4.2 billion with approximately 18, 000 employees. The company has operations in nearly 170 locations in 70 countries around the world. Wärtsilä is listed on the NASDAQ OMX Helsinki, Finland.www.wartsila.com