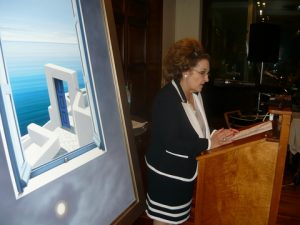 Mrs. Mero Kececioglou at the podium

Last Thursday at the Yacht Club of Greece, the Consulate of Ivory Coast organised a charity dinner event in support of the Foundation Greek Action in Africa. Many members of the shipping fraternity as well as from other sectors of business life whole-heartily participated making it a memorable evening, given also an excellent weather combination.

Except a paint’s auction, a fashion show/parade took place meticulously organised by Alice Dikaiou. Moreover music too was exceptionally impressive with the upcoming singer and songwriter Katerina S. Polemis.  Because of her own Greek Brazilian background she has been able to draw from two rich cultures each with historic and complex musical traditions. Her first solo album released in 2011, is comprised of original works in the theatrical Gypsy Jazz musical style. It’s called, Spread The Music, Not The Name. Worth obtaining same and listen to unique and tranquil sounds!

Short speeches by Mrs. Dimitra Alexandrakis, Mrs. Tsangarakis as well as the very active Mrs. Mero Kececioglou, the Consul General of the Ivory Coast in Greece and president of the Foundation “Greek Action in Africa”.

Viewers can log on the site www.actionafrica.gr and can see the nine hospitals, the two orphanages, the four schools and one maternity unit all under the name “Hellas” promoting this way Greece and its culture!

The proceeds of the event are to be given for equipment of a homeless centre. Given the current situation in Greece the impact of the success of this and other charitable events should be considered showing the humane face of Greeks to assist despite their own problems and hard times!