Panos Laskaridis’ unique presentation on the importance of Greek Shipping 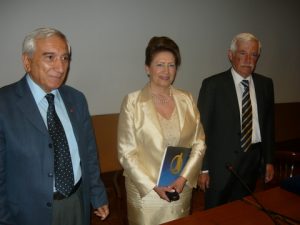 Last Monday evening at the Auditorium of the War Museum in central Athens, due to the forthcoming Posidonia 2012, the Association of National Defence Staff and the Maritime Museum of Greece organised a forum under the title: “The Merchant Marine as a pillar of our national economy”, with keynote speaker Panos Laskaridis, a shipowner – operator, general secretary of the Union of Greek shipowners and president of the Aekaterini Laskaridis Foundation. John Faraclas was there reporting:

The event opened with a warm welcome by the president of the association of National Defence Staff General(rt) Lambros Kazakos. He was followed by Anastassia Anagnostopoulou-Paloumbi, the president of Greece’s Maritime Museum who explained in detail the route of Greece’s naval and maritime power for over eight thousand years with the milestone event, scientifically proven, of the first commercial recorded crossing/voyage from Milos Island to Frachthi Cave in Argolis, north eastern Peloponnese of a vessel carrying a glassy-like rock to be used at the Stone-age era in the construction of tools and weapons! “We will never learn whether the opsidian found was transported by wooden mono-hull or papyrus-made raft, what route she followed to cover the 70 miles distance, whether she did island hopping to reach Lavreotiki (south Attica) and then on land to reach its final destination to Argolis”, she said, emphasising that transactions and transport took place before 10, 000 years!

Her “trip” through history, an amazing account ended with hope, and why not – given the current despicable situation Greece goes through: “Today Greece’s shipping is most probably the only sector for which the Greeks feel proud of! In a world governed by oppression and with possibly the worst economic crisis, Greek shipping maintains its world-wide lead giving us hope for our economy and moral”. She then explained that the current inabilities should not affect the hard-nucleus of our genes, which comprises these 100 centuries of maritime tradition and that the Greek nation will recover. In this recovery the leader will obviously be the Greek Mercantile Marine!

“So long there are good and thoughtful ship-owners, so long we have skilled and experiences seafarers, and the Greek ships carry goods around the world, this brings the feeling and assurance that Hellenism never dies! Greek Shipping will once again be the spearhead for our nation!” She was warmly applauded by all in the room before introducing the keynote speaker Panos Laskaridis.

Panos Laskaridis, a well educated man was simple and to the point. His task was to make everybody aware within the amphitheatre and also, in my view, to send the message to Greece’s political leadership – current and forthcoming, as well as to Europe and the world at large about the importance and proper treatment Greek shipping should have, as well as what it really offers to all!

Laskaridis, like many of Greece’s shipowners holds the knowledge for this specialist industry like few have in the world! A technical man who knows his subject well, having studied in Germany and the United Kingdom and following his military service with the Hellenic Navy for almost three years, created in 35 years important and robust shipping entities, many investments,  creating many jobs in Greece and abroad, as well as becoming a great benefactor and charity crusader; the Aekaterini Laskaridis Foundation being one of his cultural, educational and charity offerings! His participation in many international organisations brings him at the forefront to have a tangible say in the shipping affairs.

In his paper he gave accurate figures on the figures and percentages one needs to know about Greece’s mercantile controlled fleet,  some  3, 760 ships of 265 million tonnes deadweight and 156 million tonnes gross under 15 flags, out of which 865 are under the Greek banner- that’s says all!

He explained why we luck of seafarers, why Piraeus become the world’s biggest shipping centre; he referred to the shipbuilding, shiprepairs and conversion industries, the three main reasons of success of Greek shipping; the reinstatement of the successful Ministry of Mercantile Marine which together within the Hellenic Coast Guard suffer over the last two and a half years as a result of petty party politics – destroying the best of sixty years continuous improvement and success story, the shipfinance front, the markets as well as the stock markets, the maritime and education front, the IMO aspect, the latest Piracy and Terrorism surge, the investments of the Greek shipping Community, the foreign currency that Greece earns from shipping, with the explanation of how this is far above the touristic currency and many other issues. Other issues were the wrong unionism backed by political interference and verbalism, the cabotage saga, the coastal/ferry shipping and finally the credential of Greek shipping success that could lead to credential in other fields of he Greek Economy and life; a testimony that hurts, but it is the reality that governs the world!

He was prolonged applauded and we hope to bring you his entire paper in English for all to read and understand his well construed arguments.

There were more than 14 questions from the audience on all issues bothering the shipping industry and had we had more time Laskarides was for sure going to reply until the next day; I counted fifty more question attempts. 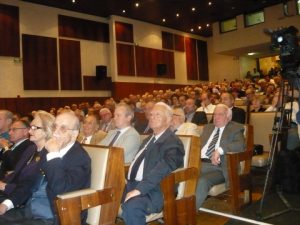 The house bursting to its seams

Ending the event, General Lambros Kazakos offered Panos Laskaridis, a commemorative plaque honouring him under the continuous applaud of the audience. Now don’t ask me who wasn’t there: the entire Greek Shipping Industry made its presence felt, even from London we spotted very prominent shipping figures – the Military too headed by the Commander in Chief of the Greek Navy Rear Admiral Konstantinos Mazarakis- Enian, Politicians, heads of Organisations and Unions, Academic and Students, Lawyers, fellow shipowners,  you name it!

It is to be noted that Laskarides threw the gauntlet by saying that the most important of all contributions and success stories is the reality of the “immateriality” of Greek Shipping which cannot be valued in Euros. It is this immateriality that can restart our Nation as we can thrive in all fields of world business life, particularly under the current circumstances!