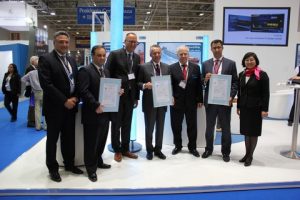 Athens, Greece, 6 June 2012 – Allseas Marine S.A. was presented with Maritime Labour Statements of Compliance by Germanischer Lloyd (GL) for the vessels “Calm Seas”, “Kind Seas” and “Pearl Seas”. The certificates were presented to Michael Bodouroglou, Managing Director of the Allseas Marine by Oliver Darley, Vice President and Global Head of Systems Certification at GL and Athanasios Reisopoulos, Vice President, GL Area Office Southern Europe, at GL’s booth at the Posidonia 2012 exhibition in Greece. Through the presentation of these certificates GL’s confirms that the working and living conditions of the crew on these cargo ships meet the requirements of the incoming Maritime Labour Convention, 2006 (MLC 2006).

GL carried out inspections on board the three vessels between March and May 2012, the “Declaration of Maritime Labour Compliance” (DMLC) was also checked by Germanischer Lloyd. During the survey, GL inspectors made sure that all required documents were present on board, interviewed crew members, and examined the accommodations areas, galley, store rooms and medical care facilities of the individual vessels.

“Obtaining a Statement of Compliance in advance of the entry into force of the MLC, 2006 reflects the commitment of Allseas to ensuring that the seafarers working on board their vessels enjoy decent working and living conditions. When our inspectors visited the vessels they found good working and living conditions throughout, such that all three vessels are in full compliance with the requirements of the MLC, “ reported Mr. Spyros Lamprinopoulos, Head of GL’s Certification Hub Greece.

The Marshall Islands flag state has already ratified the Maritime Labour Convention and adopted its requirements into its own national legislation. In March 2010 Germanischer Lloyd was authorised to carry out certifications in accordance with the MLC 2006 on behalf of the Marshall Islands.

When the Convention enters into force, as is expected to take place in 2013, all international merchant ships of 500 gross tonnage or more will be obligated to carry a Maritime Labour Certificate and a Declaration of Maritime Labour Compliance on board, documenting its compliance with the national regulations of the vessel’s flag state based on the MLC 2006. Some 50, 000 vessels will be required to be inspected and certified before its entry into force.

Using a self-assessment tool, Germanischer Lloyd can help shipowners to identify any necessary changes they must make to comply with the requirements of the MLC 2006. In an associated gap analysis on board, areas of compliance and deviation are listed in a report by GL.  In addition, GL also offers voluntary certification leading to a “Statement of Compliance” in advance of the Convention’s entry into force date. This will be converted into a Maritime Labour Certificate once the Convention enters into force.

About the Maritime Labour Convention, 2006

The Maritime Labour Convention, 2006 (MLC 2006) of the International Labour Organisation (ILO) will govern the working and living conditions on board a ship for more than 1.2 million seafarers worldwide. It defines requirements concerning occupational health and safety, fair employment contract conditions, adequate accommodations, as well as access to medical care, health care and social security.

More than 60 existing ILO conventions and recommendations from the past 80 years have been updated and brought together in the new “Maritime Labour Convention, 2006”. It is anticipated that the Convention will enter into force in 2013. It will first have to be ratified twelve months in advance by at least 30 ILO member states with a total tonnage of at least 33% of world tonnage. 26 states have already ratified the “Maritime Labour Convention, 2006”, including Antigua & Barbuda, Bahamas, Liberia, Marshall Islands, Panama, Norway, Spain, Croatia and the Netherlands. Enforcement and monitoring of the MLC 2006 will be undertaken by the flag states of the individual vessels.