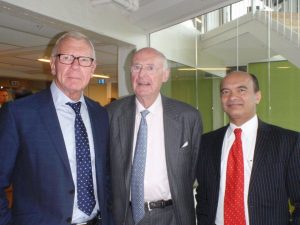 Key figures in the Danish shipping industry have underlined the importance of clear strategic planning to cope with the increased turbulence, uncertainty and complexities on a global basis  – and of the sector’s need for substantial short-term cash-flow. 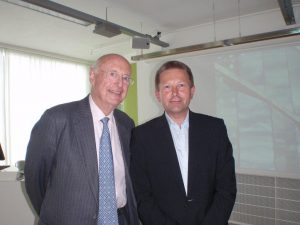 The message was delivered as leading executives welcomed to Copenhagen a delegation from the International Maritime Industries Forum.  The occasion was the first formal visit by members of the London-based IMIF to the Danish capital, where they were also welcomed on behalf of WISTA Denmark (a key section of the Women’s International Shipping & Trading Association).

One of the keynote speakers, Torben Janholt, president and chief executive of J Lauritzen, which has 175 operated vessels and a programme of 16 newbuildings, in the bulk, gas product tanker and offshore sectors, said that strategy formulation and implementation was more important than ever. Mr Janholt cited Clarkson Research Services indices showing that a weighted average of tanker, dry bulker and container rates was now at levels comparable to those of pre-2000. 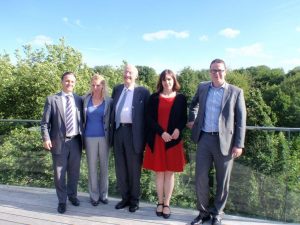 The second main speaker of the day, Finn Bjarke Petersen, transport analyst director at Nordea Markets, presented some stark facts on the state of the container market, most graphically declaring that ocean carriers would need $19bn in cash over the next two years.

Mr Petersen said that the sector definitely lost $7.2bn in the period 2009-2011 and had a net financial cost of $2.1bn to service existing debt.  The net loss aggregated five carriers who had total earnings before interest and tax of $2.6bn, with 15 which amassed a loss of $9.6bn.

The Nordea analyst calculated lay-up as 579, 000 teu as at May 2012, a total likely to be reduced over the summer before rebounding to 1m teu at the end of the year.  The Asia-Europe rate level “is still highly loss-making, ” he said, but the order book had declined to 23% of the fleet, the lowest since 2002. Container rates for the year to date had improved to a profit of $800 per teu, from a loss of $250 per teu in the fourth quarter of 2011.

Analysing in depth the major group AP Møller-Mærsk A/S, Mr Petersen rated it in stock terms a “strong buy” with a price target of DanishKr55, 000 per share. Nordea was maintaining its full year profit forecast for Maersk Line at $1bn. The conglomerate is active on both sides of the oil trade, with Maersk Line a spot buyer of bunkers and Maersk Oil selling spot. An increase in the oil price would on recent figures lift income at Maersk Oil by $34m, but would cost Maersk Line $67m.

Mr Petersen presented the audience with a second case study, of bulker and tanker operator DS Norden, which he admired for its ability to adjust its fleet to demand and market conditions.  He rated Norden equity as a “buy, ” with a price target of DKr185.

The IMIF guests were formally welcomed by Irene Rosberg, program director of the Executive MBA in Shipping & Logistics at Copenhagen Business School, on behalf of the program, known as the Blue MBA, and on behalf of WISTA Denmark, of which she is president.

The encounter took as its central theme a survey of the strategy of global shipping companies. IMIF chairman Jim Davis gave an overview of that body’s activities, which are aimed at heightening rational approaches to the market.  Mr Davis has during his 60 years in shipping and ship finance enjoyed strong business links with Denmark, having been at one time chairman of DFDS Ltd, and his contributions to the industry having been recognised through honours including a knighthood in Denmark and CBE in Britain.

How women fought on all fronts for equal status in society –