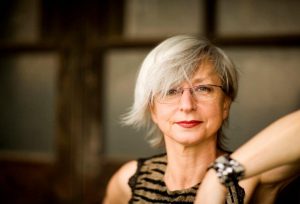 Bettina Schroeder is a painter who loves getting out on location, regardless of the wind, rain, cold or heat. Mostly she travels far away from her London base, and a vibrant sense of  freedom and of nature’s palette shines through her watercolours, seen to advantage in her latest solo exhibition which opens in London on July 4 2012. 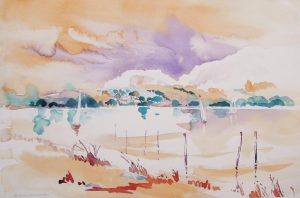 On view are mainly landscape paintings including some seascapes, which are inspired, says Bettina, “by being out in the open and experiencing the great outdoors. All works are done completely on location, which sometimes means standing painting by the shore line with an umbrella or huddling against a rock for shelter by a Scottish loch in the Highlands.”

Bettina, who has exhibited recently in Santa Fé, Zurich, and London, is a shrewd analyst of political and ecological paradox, and is blessed with a fine sense of humour which she has applied to some of her installations. Born and educated in Germany, she moved to London in the 1980s, already influenced by movements like Dada, the ‘Junge Wilde’ in Berlin, and later Britart. This “encouraged my belief that the making of art has no limits, either in the technical sense, or in subject matter.” She once took to knitting a newspaper after reading bad news, and at an exhibition in Cologne earlier this year, dressed in what she called the Rescue Dress made from plastic bags, explaining that  knitting the bags into clothing was a symbolic way of keeping them ‘alive’, reversing the process of destruction. She compared the throwaway bags to a luxurious wedding dress, worn only once, and their emergence as a by-product of petroleum made them symbols of the perceived looming global peak in oil production.

We are in calmer waters with her new show, which focuses on her use of watercolour, a medium which “gives me the freedom to be spontaneous and to work easily outdoors.” She is passionate about teaching others, and has been organising painting holidays since 1987, initially in Wales, and later in settings such as the dunes of the Sahara, the ancient landscapes of Sicily, the verdant hillsides of Devon and the mountains and lakes of Tuscany and Scotland, Hundreds of amateurs at every level have benefited from her generous and skilful advice. 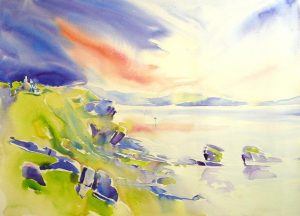 For more about Bettina’s painting holiday offerings, go to http://www.art-holidays.com

Bettina Schoreder painting in Devon during a shower

These are maginificent watercolours, i can taste the weather in them. The bold use of colour and deft spontaneous movement – both are difficult to achieve in this essentially delicate medium. I detect an influence of expressionist feeling rather than dadaist nonsense here.