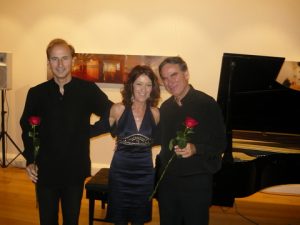 Following our 9th of November reporting on Victoria Hislop’s book “The Island” here we go again for yet another masterpiece; John Faraclas reports:

It took me a week to read it twice; indeed I had two sleepless nights but alas, I can have my say: …the Thread is unfolding! As my other half Anny has already finished the Greek  Book – yes its already translated, I had to speed up so that we can exchange views … but I will read it again and again to properly digest it! 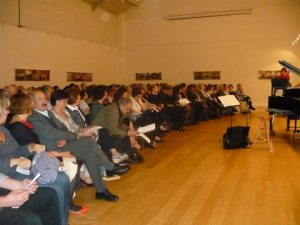 The Grand Hall of London’s Hellenic Centre witnessed a very unique presentation last Thursday; with a different lay out to be able to accommodate more of the faithful lot that gathered for Victoria Hislop’s new book presentation, the 200 plus enjoyed one of the best ever nights in the Centre! Who wasn’t there! I am sure Ian, Victoria’s husband had really news for you…

The story is about Thessaloniki, Greece’s second city up the north in Macedonia. Nearly a century ago, in 1917 its populations comprised an even mixture of Christians, Muslims and Jew. Within three decades only Christians remained. The Thread is the tale of two people who lived through the most turbulent period of the city’s history, when it was battered almost beyond recognition by a sequence of political and human catastrophes. The characters and many of the streets and places they inhabit are entirely fictional, but the historical events all took place. Greece still carries their legacy today.

…Thessaloniki 1917 As Dimitri Komninos is born, fire devastates the thriving Greek City where Christians, Jews and Muslims live side by side. Four years later, Katerina Sarafoglou’s home in Minor asia is destroyed by the Turkish army.  Losing her mother in chaos, she flees across the sea to an unknown destination I Greece. Soon her life will become entwined with Dimitri’s, and with the story of the city itself, as war, fear and persecution begin to divide its people.

… Thessaloniki 2007 A young Anglo-Greek hears his grandparents’ life story for the first time and realises he has a decision to make. For many decades, they have looked after the memories and treasures of the people who were forced to leave. Should he become the next custodian and make this city his home?

For Thessaloniki there are very few books written for the wider masses; the author quite rightly mentions in the last part of her book about Salonica: City of Ghosts, Mark Mazower’s epic which I have read four years ago when it was awarded the John Kritikos prize award at a special ceremony at the Royal Overseas League House in Central London organised by the London Hellenic Society, as well as her own account of her visits there; a very touching account. This account as well other books on Thessaloniki can greatly assist the reader in appreciating this new epic of Victoria Hislop.

Victoria spoke also in Greek – given that she takes Greek lessons at the Hellenic Centre and that made not only the Greeks, but the international attendees of the event ecstatic!

During the drinks break, there was a long queue for Victoria to sign over 100 books – people had to wait until the end of the programme, yet another surprise from Victoria: Two acclaimed Greek professional musicians played songs from Manos Hatjidakis’ repertoire! At the piano Miltos Logiades and the accordion was uniquely performed by Christos Zerbinos; there are no words to describe the reaction from the audience; excellent!

The Thread is published by the Headline Review and viewers can log on www.headline.co.uk or www.victoriahislop.co.uk .-