John Faraclas’ oxymoron view or reality on the markets “performance”?

This is a quickie report/outlook on the market and includes the past seven months and the remaining five until the end of this annus horribilis for the shipping freight rates… and ships prices too! You don’t need to know much, and I wouldn’t bother in the middle of the summer to spoil your vacation… (for those in the south hemisphere it’s always different..) and the coming London 2012 Paralympic Games too! At least we all enjoyed, one way or another, the London 2012 Olympics show to all intents and purposes…

The past seven months

For a start the market despite the brokers’ “injections” via various reports and views proved that doesn’t have a leg to stand above the 1, 000 mark barrier of the BDI. I believe it’s pathetic when you read immediately the BDI peaks a bit, the rush to announce that markets are promising and so forth…

Secondly: I reiterate whatever I have written about the markets – see relevant reports herein!

The wet cargoes too are not performing as expected. Arctic Oil and South Atlantic oil reserves are about to change what the Middle East fiasco and the Suez manipulation bothered us for over 40 to 50 years – wait to see what will happen in the Aegean Sea and generally speaking in Greek waters and far reaching Oceania; Indonesia has to accept the inevitable. The Chinese too are laying claims, but how do you counter the American rise in oil production? When the market continues for so long making…waves, wait for the freak waves to see the end… unless something spectacular happens; and you never ever know! Unforeseen circumstances saved the shipping markets in the past; will this happen again?

I wonder how many know how to read and interpret the graphics and how many include other parameters, particularly in valuing risk and projectability of the markets.

Thirdly, I maintain the view that, in general, the shipping industry is changing face and new parameters enter the projections and calculations of all markets, whether we talk for dry or wet, frozen or the box ones. We live through a new world order and I guess we are in a transitional era, for example, sanctions where never ever a part of any risk assessment (correct me if I am wrong – nobody ever calculated the sanctions….saga), or parameter, hence wait and see what will happen! If you follow up the legal practices’ bulletins, you will see that the sanctions are taking shape and it’s quite a twist, thus becoming part of the market game; because we are talking for a game but without fair play! Hypocrisy champions best. There are other ways to contain the infidels of any kind and of any nationality, religion, political and social belief…

The LIBOR scandal with Barclays bank at the epicentre, but many others “where” happily involved as well as other jeopardies created a new word: BANKSTERS, which even become a front cover in my precious Economist magazine nearly a month ago. Did I hear you say Grexit? Poor Greece, what an envy… Imagine if Katharses begins from Greece… sooner or later the world will be on fire from the shipyards scandal!

Talking about scandals, how about the iron ore scandal that fuelled ships newbuilding prices? Now that we see a drop of nearly 30 centum, and miners making colossal loses per statistics, graphics and reports we read, are ships prices correspondingly analogous with this drop? No matter the Chinese imports, the whole thing was/is unethical.   Imagine if an ombudsman takes up and pursues the matter…the shipfinance divisions of most banks will be on fire… 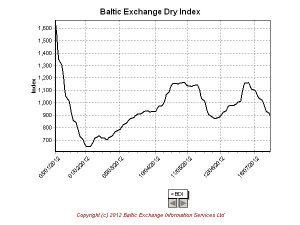 Now, I guess I have fully explained in previous reporting about the markets, particularly in my article “Shipping Markets Growth Predictions and World Politics”, as well as in the other one “647, good heavens – the market deeps down to…Hades!”.  Many objected my then views which finally, in the long and short term prevailed to the detriment of analysts and the hoi polloi, vis-à-vis a poor, a downgraded market with incalculable repercussions. Any objections? How the loans are going to be performed?

The next five months ahead – and much more…

The world’s economy is in tatters; the first and second rounds belongs to the bankers and their political masters; the third one to chaos. Obviously some will thrive in chaos, but with the coming Armageddon, all Business Hooligans will be exposed, as they never ever kept ethics as they should have done. Why? They overstayed our welcome …err greediness at its best! Are we going to see National Fleets?

The main task for the winner of the coming American elections, is not only to rebuild, but to rebrand the American economy, something few have understood. Romney or Obama, America will remain the same, but so much still depends on a better American sustainable economy – at least for another fifty years!

Following my predictions for the market and given that whilst you read these lines the BDI is dropping, approaches the 700 mark, people ask me more than ten times a day “… what’s going to happen John?”; well, those who knew what they were doing and those backing all these volatile investments, let them bear the burden… Remind you that the Daily Running Cost of a ship is increasing as well as the cost for further insurance covers due to piracy and terrorism…

Nobody talks about the fact that the world is bankrupt, thank to the corrupt politicians all over the place; is anybody objecting to this? And what about the otherwise called business commissions, the bribes I mean  – just check the official figures…say those of Transparency International,  and that we are heading for war; when same is on, don’t bother to call me, and don’t brand same as hostilities… Again per the Ancient Greek maxim, remind you: “War Father of all” – and may I add: “if you don’t destroy, you cannot rebuild…” Did I hear you say: “Construction, redevelopment…??

Last but not least, whilst we know what the US will do, we know what China will do, but somebody must talk to Mrs. Merkel before is too late…

Ending this market briefing do please note herebelow the factors which will shortly influence the market freight rates and ships prices for the foreseeable future:

Now, I am sure you “know” how to navigate in turbulent waters! Need a pilot onboard? Finally, renewing the world fleet is one thing; dealing with overcapacity and conversley with bad loans, yet another. As far as remedies, well if in 1977/1978 the scrap and built scheme failed, imagine now… Have a nice weekend!

P.S.1 I would love to see oil prices collapse; LNG comming up; I would like to see alternative sources of energy creating a situation whereas big money will change hands, if we opt for the ASE; have your say and write us your comment!

P.S.2 How you expect the world to progress when “we” promote a nurse, register or otherwise to become a surgeon… Try to interpret this with the condition and status of many shipyards worldwide, particularly in the Far East….not to mention when an ABS (able bodied seafarer) …is elevated to the rank of the Master….!