Rescued from the deep: a shipwreck treasure is centre stage at Bronze, the new Royal Academy exhibition 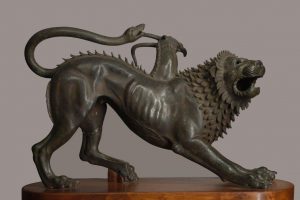 – Rescued from the deep: a shipwreck treasure is centre stage at Bronze, the new Royal Academy exhibition – By James Brewer

Modern man has recovered many artefacts lost from ships wrecked by storms and in battle, with gold bullion being the most obviously valuable of the finds.  Beyond monetary considerations, arguably the most precious prizes have been objects of bronze. Many classical sculptures have been hauled from the deep, and one of the most wonderful pieces greets visitors to the magnificent new exhibition entitled simply Bronze, at the Royal Academy, London.

It was first thought that the representation was made in Greece in the fourth century BC, perhaps by the famed Greek sculptor Praxiteles or a follower; it has been more recently dated to the third or second century BC.  Some 200cm high, this representation of a mythical creature is one of the most astonishing finds of recent decades.  Fishermen working off the coast of Sicily found the left leg in 1997, and a search through the 500 m deep silt the next year scooped up the well preserved head and torso in one piece. A hole in the back of the figure suggests it may have been for the statutory goat’s tail. Skilful restoration has done wonders, but one can still see the corroding power of the sea. This satyr is on loan from the Museo del Satiro, Church of Santa Egidio, Mazara del Vallo, Sicily. 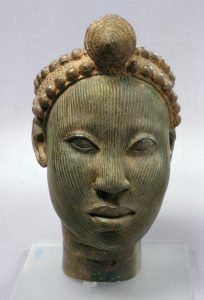 Probably lost overboard while being carried on a voyage in Roman times, the antiquity evokes curiosity as to how many more fabulous Greek and other sculptures lie buried throughout the Aegean and Mediterranean area.

In more northerly waters, there is much to recover, too. As recently as 2009, evidence was found of HMS Victory, the mightiest and most technologically advanced warship of its time, sunk in 1744 by a storm in the English Channel. All 1, 000 people on board were lost, together with 110 weighty bronze cannon and $1bn worth of gold bullion. This has been described as the naval equivalent of the Titanic.

Back to the current exhibition, where we learn that bronze has a 5, 000 year history.  It was the first alloy, combining the softer metals of copper and tin, to be used by prehistoric people, and then the ancient Greeks loved its tensile strength, although strangely more works of marble have come down through the ages. Italian artists, including Leonardo da Vinci, were devotees of bronze. A roaring Etruscan sculpture of hybrid lion with serpent’s tail, the Chimaera di Arezzo, dating from 400BC, was unearthed in Italy in 1554, and cleaned up for show by Duke Cosimo I de Medici. It was probably once part of a massive sculptural group.

Bronze was taken up enthusiastically in West Africa, being cast as early as the ninth century AD. In southeastern Nigeria, a caption in the Royal Academy show tells us, there was “an extraordinary flowering of technology and creativity, whose source and context is as yet unexplained.”

Among the 150 grand exhibits are some from the modern age: among them one from Picasso who showed his engenuity by assembling in 1951 a statue of a baboon from found objects, including a face that was originally the toy motor car of his son. Naturally, Rodin is to the fore in the display.

Not quite to everyone’s taste will be  “a 3D still life, ” the two beer cans cast in bronze and painted by Jasper Johns, made in 1960 in response to a jest by another artist about the ability of the dealer Leo Castelli, to sell anything, even beer cans.

Some magnificent female heads, including one of Catherine de Medici, show us that the “iron ladies” of the past have graphically exuded power via bronze representations.

The exhibition confidently and admirably achieves what the curators, Professor David Ekserdjian of Leicester University and Cecilia Treves of the Royal Academy, set out to do: in the words of the former, to celebrate bronze as a universal medium for art, even though the casting process is pretty complicated.

The exhibition continues until December 9 2012.

Discussion about the Greek crisis and its possible resolutions