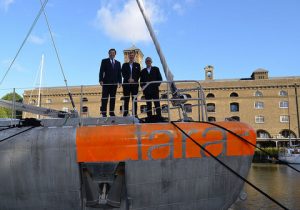 Tara is in London prior to embarking on a research voyage to the Arctic, studying the polar marine ecosystem and building on research work previously undertaken.

The research carried out by Tara helps to boost our collective knowledge of the oceans, which is vital to the search for ways to achieve sustainable development, a cause with which Mr Sekimizu is closely associated.